South Korean President Yoon Suk-yeol has declared a period of national mourning following a deadly Halloween crush in the country’s capital, Seoul, as distraught relatives flocked to the city’s hospitals searching for their missing family members.

“This is truly tragic,” Yoon said in a statement on Sunday, hours after some 153 people were killed in a crowd crush in Seoul’s Itaewon district.

“The government will designate the period from today until the accident is brought under control as a period of national mourning,” he said.

Fire officials said most of the victims were women and young people in their 20s and included 19 foreigners from Iran, Uzbekistan, China and Norway. 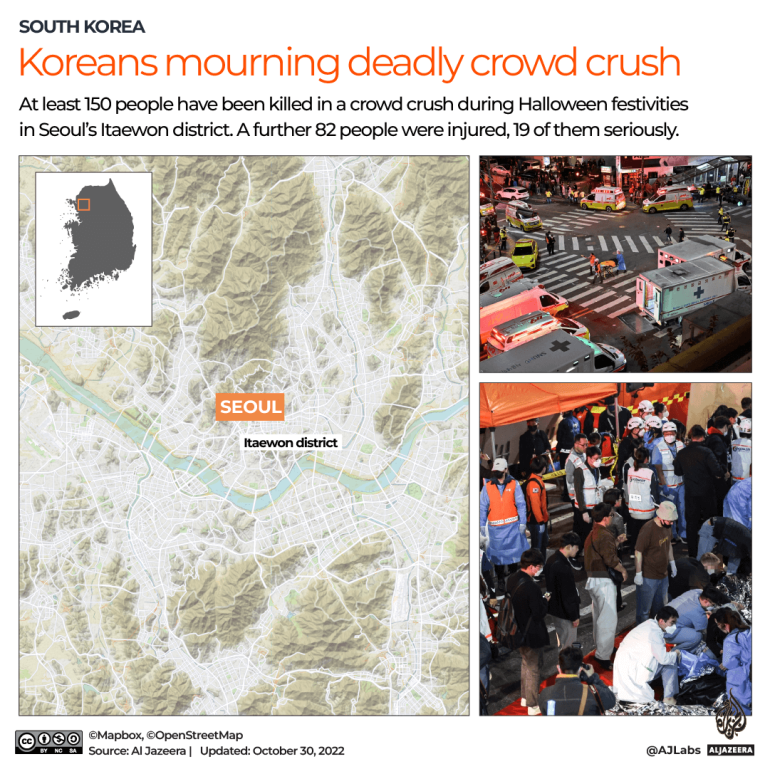 The Yonhap news agency called the disaster, which took place shortly after 10pm local (13:00 GMT) when a huge crowd thronged a narrow alley near the Hamilton Hotel, the deadliest such incident in South Korean history.

It happened at the first Halloween celebrations in Seoul in three years, after the country lifted COVID-19 restrictions and social distancing. Tens of thousands of partygoers, wearing masks and Halloween costumes, had reportedly gone to Itaewon for the event.

The cause of the crush was not immediately clear, though some local media said it happened after a large group of people rushed to a bar in the area after hearing an unidentified celebrity visited there.

Witnesses described scrambling to get out of the suffocating crowd in the downhill alley as people ended up piling on top of one another.

“People kept pushing down into a downhill club alley, resulting in other people screaming and falling down like dominos,” one unidentified witness was quoted as saying by the Yonhap news agency. “I thought I would be crushed to death too as people kept pushing without realizing there were people falling down at the start of the stampede.”

“There were so many people just being pushed around and I got caught in the crowd and I couldn’t get out at first too,” 30-year-old Jeon Ga-eul told the AFP news agency. “I felt like an accident was bound to happen.”

‘We thought we were going to die’

Babette Vanderhaeghen, a Belgian resident of Seoul, told the Korea Joong Ang Daily newspaper that she escaped the melee. “We thought we were going to die because there were far too many people,” she said.

Another survivor blamed owners of bars and clubs for the high death toll, accusing them of blocking people trying to escape the crush.

“It looks like the casualties were more severe as people attempted to escape to nearby stores but were kicked out back to the street because business hours were over,” the survivor who asked not to be named told Yonhap.

Videos and images from the immediate aftermath showed chaotic scenes of fire officials and citizens treating dozens of people who appeared to be unconscious. Footage from later on in the evening showed dozens of bodies spread on the pavement covered by bed sheets and emergency workers dressed in orange vests loading even more bodies on stretchers into ambulances.

The Seoul Metropolitan government, which had issued emergency text messages urging those in Itaewon to swiftly return home, said on Sunday that it has received reports of 355 missing people following the disaster.

It said 60 staff members have been assigned to about 50 hospitals to support the bereaved families of the victims.

The Korea Herald reported desperate scenes outside the Soonchunhyang University hospital, less than a kilometre (mile) away from Itaewon, as relatives searched for their loved ones.

One mother looking for her son said she had gone to the police when he failed to answer his phone. One police officer said her son’s last phone activity had been in Itaewon, so she rushed there.

“When I got to Itaewon they said there were a lot of lost phones, and that I should try the nearby hospital and see if he made it there,” she told the Korea Herald. Commenting on the death toll at that point, she said: “One hundred and forty? That’s so many. Maybe he died. I don’t know. I can’t reach him.”

Another sobbing mother told the news outlet that she had gone back and forth between the hospital and a gym in the area where the bodies of victims had been taken to.

“Where do I have to go?” she asked the police officers there. “Please tell me what I have to do.”