The world faces the most dangerous decade since World War II as Western elites scramble to prevent the inevitable crumbling of the global dominance of the United States and its allies, Russian President Vladimir Putin said.

Putin accused the US on Thursday of inciting the conflict in Ukraine, adding the West was playing what he cast as a “dangerous, bloody and dirty” geopolitical game that is sowing chaos across the world.

Ultimately, he said, the West would have to talk to Russia and other major powers about the future of the world.

“The historical period of the West’s undivided dominance over world affairs is coming to an end,” Putin told the Valdai Discussion Club, a conference of international policy experts.

“We are standing at a historical frontier: Ahead is probably the most dangerous, unpredictable and, at the same time, important decade since the end of World War II.”

Russia did not consider the West to be an enemy of Russia despite the current phase of confrontation, he added. Moscow “had one message” for the “leading countries of the West and NATO: let’s stop being enemies, let’s live together”.

The White House said Putin’s remarks were not new and did not indicate a change in his strategic goals, including in Ukraine. 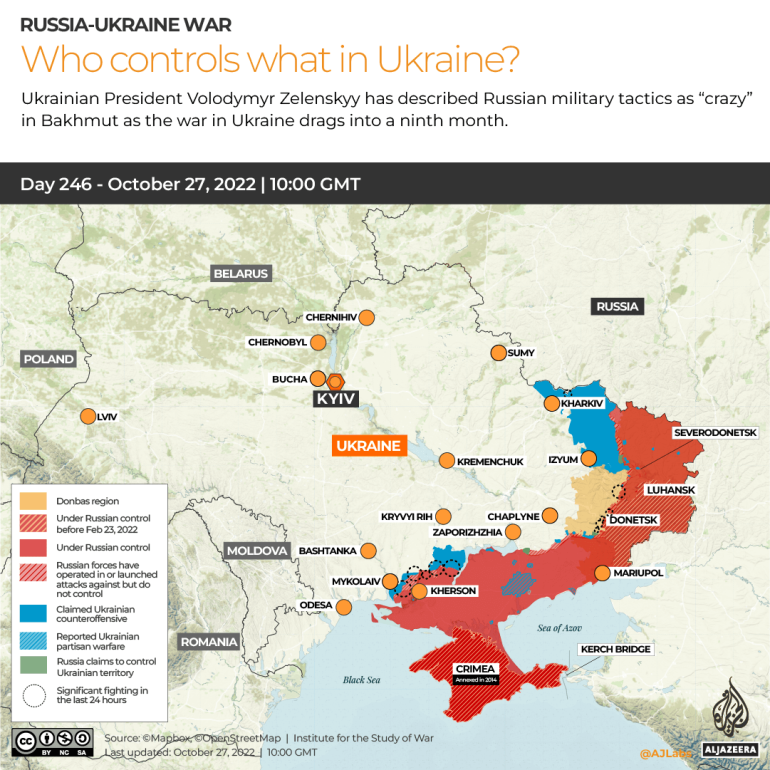 Russia sent troops into Ukraine on February 24, triggering the biggest showdown with the West since the 1962 Cuban missile crisis in the depths of the Cold War when the Soviet Union and the US came closest to nuclear war.

Tens of thousands of people have been killed while the West has imposed the most severe sanctions in history on Russia, one of the world’s biggest suppliers of natural resources.

Putin said Moscow was ready for talks to end the conflict in Ukraine, but said Kyiv was not prepared to sit down at the negotiating table.

“It’s not a question about us, we are ready for negotiations. But the leaders in Kyiv decided not to continue negotiations with Russia,” he said. “It is very easy to solve this problem if Washington gives a signal to Kyiv to change its position and solve the problem peacefully.”

There have been no peace talks between the two since attempts at a negotiated settlement fell apart in the first weeks of the conflict, and Ukrainian President Volodymyr Zelenskyy has explicitly ruled out a negotiated deal with Putin.

Asked about a potential nuclear escalation, Putin said the danger of nuclear weapons usage would exist as long as nuclear arms do.

Moscow has no intention to use nuclear weapons in Ukraine, he said. “We see no need for that. There is no point in that neither political nor military.”

Maria Zakharova, Russia’s foreign ministry spokeswoman, argued “the more the US is drawn into supporting the Kyiv regime on the battlefield, the more they risk provoking a direct military confrontation between the biggest nuclear powers fraught with catastrophic consequences”.

Quoting a 1978 Harvard lecture by Russian dissident and novelist Alexandr Solzhenitsyn, Putin said the West was openly racist and looked down on other peoples of the world.

“Power over the world is what the so-called West has put on the line in its game – but the game is dangerous, bloody and I would say dirty,” Putin said. “The sower of the wind, as they say, will reap the storm.”

Putin cast the conflict in Ukraine as a battle between the West and Russia for the fate of the second-largest Eastern Slav country. It was, he said, partly a “civil war” as Russians and Ukrainians were one people. Kyiv flatly rejects both those ideas.

Putin said he thought constantly of the Russian losses in Ukraine, but said only Russia could guarantee its territorial integrity.

“I have always believed and believe in common sense so I am convinced that sooner or later the new centres of the multipolar world order and the West will have to start an equal conversation about the future we share – and the earlier the better,” Putin said.