People from Ukraine’s southern Kherson region are expected to begin arriving in Russia after a Moscow-installed official in the partially occupied area suggested residents should leave for their own safety.

In a sign of Moscow’s weakening hold on territory it claims to have annexed, Moscow said it would help residents evacuate amid an advancing Ukrainian counteroffensive.

“The government took the decision to organise assistance for the departure of residents of the [Kherson] region,” Russian Deputy Prime Minister Marat Khusnullin said on Thursday.

The Russian-installed governor of Ukraine’s southern Kherson region earlier told residents to take their children and flee, after Kyiv said it had retaken five settlements in the southern region.

In a video statement on Telegram, Vladimir Saldo had publicly asked for Moscow’s help transporting civilians to safer areas.

“Every day, the cities of Kherson region are subjected to missile attacks,” Saldo said. “As such, the leadership of the Kherson administration has decided to provide Kherson families with the option to travel to other regions of the Russian Federation to rest and study.”

“We suggested that all residents of the Kherson region, if they wish, to protect themselves from the consequences of missile strikes … go to other regions,” he said, advising people to “leave with their children”.

Residents on the west bank of the Dnieper River had priority, he said. That includes the regional capital, the only major Ukrainian city Russia has captured intact since its February 24 invasion.

Russia’s TASS news agency reported a first group of civilians fleeing from Kherson was expected to arrive in Russia’s Rostov region as soon as Friday.  Others are expected to head to Crimea, which Moscow annexed in 2014.

Kherson is one of four partially occupied Ukrainian provinces that Russia this month announced it had annexed, and arguably the most strategically important. It controls both the only land route to the Crimean peninsula, and the mouth of the Dnieper, the giant river that bisects Ukraine.

Since the start of October, Ukrainian forces have burst through Russia’s front lines there in their biggest advance in the south since the war began.

They have since moved rapidly along the river’s western bank, aiming to cut off thousands of Russian troops from supply lines and potential routes of retreat.

Kyiv says it has recaptured more than 400 square kilometres (155 miles) in the Kherson region in less than a week, with its forces bearing down towards the three-kilometre-long (two-mile-long) Nova Kakhovka dam that provides one of the last river crossings.

Regional governor Vitaly Kim said the top two floors of a five-storey residential building were destroyed and the rest was under rubble. Video footage provided by state emergency services showed rescuers pulling out an 11-year-old boy who Kim said had spent six hours trapped under the destroyed building.

In the east, three Russian missiles exploded on Thursday morning near the central market in Kupiansk, a major railway junction city that Ukrainian forces recaptured during their big advance there in September. 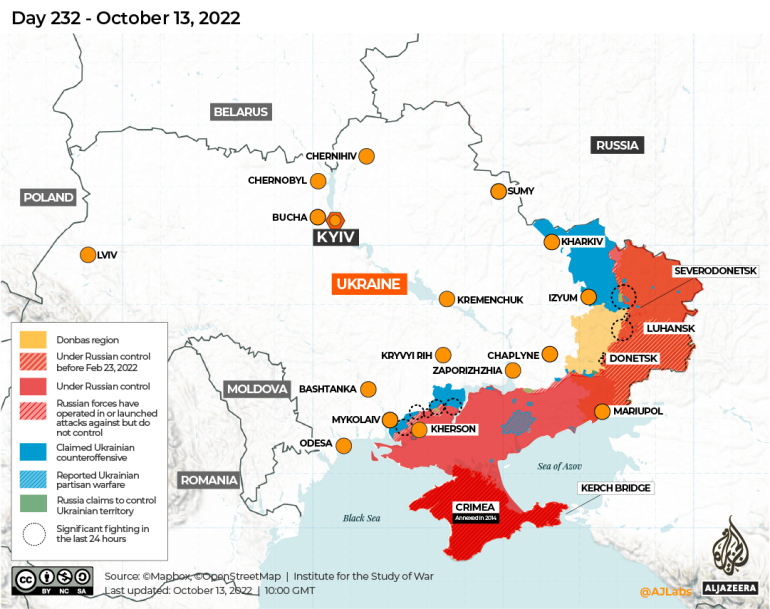 On Thursday, NATO allies meeting in Brussels unveiled plans to jointly beef up Europe’s air defences with Patriot and other missile systems.

“We are living in threatening, dangerous times,” said German Minister of Defence Christine Lambrecht at a signing ceremony where Germany and more than a dozen European NATO members committed to jointly procuring weapons for a “European Sky Shield”.

Moscow said more military aid for Kyiv made members of the US-led military alliance “a direct party to the conflict” and said admitting Ukraine to NATO would trigger a global conflict.

“Putin is saying he is not bluffing. Well, he cannot afford bluffing, and it has to be clear that the people supporting Ukraine and the European Union and the Member States, and the United States and NATO are not bluffing either,” Borrell said.

“Any nuclear attack against Ukraine will create an answer, not a nuclear answer but such a powerful answer from the military side that the Russian Army will be annihilated.”