The former head of Kazakhstan’s domestic intelligence agency has been detained on suspicion of high treason after he was fired amid violent protests.

The National Security Committee, or KNB, said in a statement on Saturday its former chief Karim Masimov – a close ally of Kazakhstan’s founding President Nursultan Nazarbayev – was arrested on Thursday after it launched an investigation into charges of high treason.

“On January 6 of this year the National Security Committee launched a pre-trial investigation into high treason,” it said. “On the same day, on suspicion of committing this crime, former chairman of the KNB KK Masimov was detained and placed in a temporary detention centre, along with others.”

No details were given about what Masimov, a two-time ex-prime minister, was alleged to have done that would constitute an attempted government overthrow. KNB, a successor to the Soviet-era KGB, is responsible for counterintelligence, the border guards service and anti-terror activities.

Ben Goodwin, head of analysis at Prism Political Risk Management, described Masimov as “the grey cardinal of the regime of Nursultan Nazarbayev”.

“The public announcement of Masimov’s arrest suggests that [President Kassym-Jomart] Tokayev is moving extremely boldly – in a way that most people did not anticipate at all – to dismantle the remnants of the very powerful Nazarbayev grouping,” Goodwin told Al Jazeera, speaking from London.

“His arrest is a sign that not only have there been dismissals as a result of these protests, but that actually, the allies and family of Nursultan Nazarbayev are also being moved out of power.”

Authorities say security forces killed 26 demonstrators in this week’s unrest and 18 law enforcement officers died. More than 4,400 people have been arrested, the Ministry of Internal Affairs said on Saturday.

Public buildings across Kazakhstan were ransacked and torched in the worst violence experienced by the former Soviet republic in 30 years of independence. Russia sent troops to help quell protests.

Security forces appeared to have reclaimed the streets of Kazakhstan’s main city Almaty on Friday after days of violence. The Russian-backed Tokayev said he ordered his troops “to shoot to kill” to put down a countrywide uprising.

Some businesses and petrol stations began to reopen on Saturday in the city of about two million people as security forces patrolled the streets. Occasional gunshots could still be heard around the city’s main square.

The deputy mayor of the city was quoted by Russia’s RIA news agency as saying operations to purge the city of “terrorists and bandit groups” were still under way and citizens were advised to stay at home.

Tokayev told Russian President Vladimir Putin in a “lengthy” phone call the situation in the country was stabilising, the Kremlin said on Saturday.

“At the same time, hotbeds of terrorist attacks persist. Therefore, the fight against terrorism will continue with full determination,” Tokayev’s office quoted him as saying.

It said Putin backed a proposal from Tokayev on the call to convene a video conference of leaders from the Collective Security Treaty Organisation (CSTO), under whose umbrella Russia and four other former Soviet republics have sent troops into Kazakhstan to help restore order.

Some of the force is guarding government facilities in Nur-Sultan, which “made it possible to release part of the forces of Kazakhstani law enforcement agencies and redeploy them to Almaty to participate in the counter-terrorist operation”, said a statement from Tokayev’s office.

Washington has challenged the justification for sending Russian troops to Kazakhstan and questioned whether what has been billed as a mission of days or weeks could turn into a much longer presence.

“One lesson of recent history is that once Russians are in your house, it’s sometimes very difficult to get them to leave,” Secretary of State Antony Blinken said on Friday. 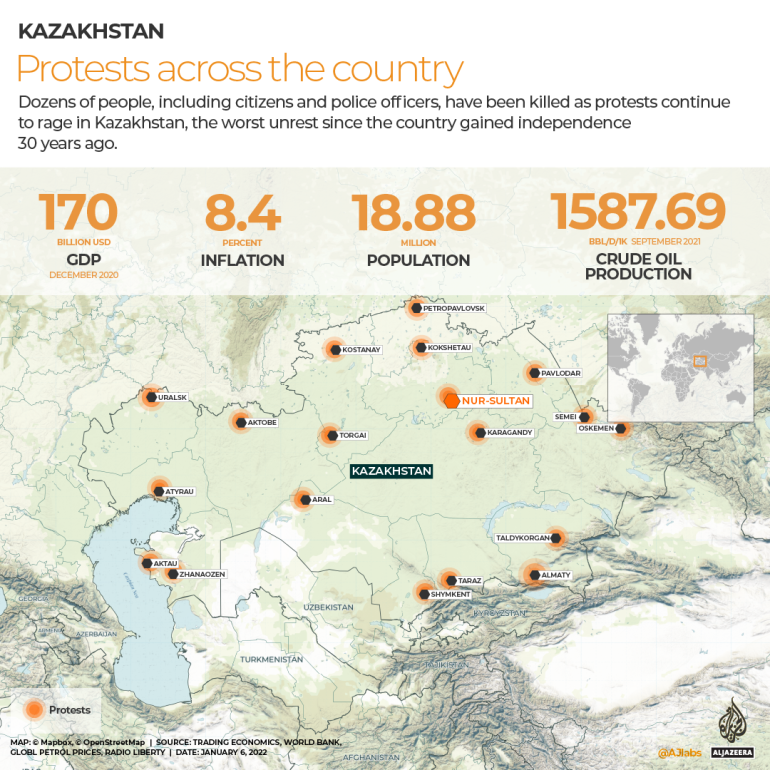 ‘Rally around the president’

The demonstrations began as a response to a fuel price increase but swelled into a broad movement against the government and Nazarbayev, the 81-year-old longest-serving ruler of any ex-Soviet state until he turned over the presidency to Tokayev in 2019.

His family is widely believed to have retained influence in Nur-Sultan, the purpose-built capital that bears his name.

Nazarbayev’s press secretary said on Saturday the ex-leader is in Nur-Sultan, dismissing rumours of him leaving the Central Asian country in the wake of unprecedented unrest.

Nazarbayev “calls on everyone to rally around the president of Kazakhstan to overcome current challenges and ensure the integrity of the country”, Aidos Ukibay said on Twitter.

He also called against spreading “knowingly false and speculative information”, likely referring to unconfirmed reports that Nazarbayev had fled the country.

The unrest began in the country’s far west as protests against a sharp rise in prices for liquefied petroleum gas (LPG) that is widely used as a vehicle fuel, and spread to the country’s largest city, Almaty, where demonstrators seized and burned government buildings.