The Saudi-led coalition has carried out air raids in the Yemeni capital Sanaa, killing more than 12 people, according to residents, a day after the Houthi rebel group launched a deadly attack in the United Arab Emirates (UAE).

Saudi Arabia and the UAE intervened in Yemen’s war in 2015 to restore the government of President Abd-Rabbu Mansour Hadi, who fled after Houthi rebels took over the capital and parts of northern Yemen in late 2014.

The UAE largely scaled down its military presence in the country in 2019 but continues to hold sway through the Yemeni forces it arms and trains.

Early on Tuesday, the coalition said it had begun air raids against strongholds and camps in Sanaa belonging to the Iran-aligned Houthi group, according to Saudi state media.

The attack that killed about 14 people, according to initial estimates, hit the home of a former military official, Reuters reported.

It killed him, his wife, his 25-year-old son, other family members and some unidentified people, a medical source and residents told Reuters.

But the Houthi group, which claimed Monday’s attack, said about 20 people were killed. Coalition attacks around the city had killed a total of about 20 people, the Houthi’s deputy foreign minister said on Twitter.

The UAE said it reserved the right to respond to “terrorist attacks and criminal escalation”. Two Indians and a Pakistani working for UAE oil giant ADNOC died in the Houthi attack that ignited fire near Abu Dhabi’s airport. 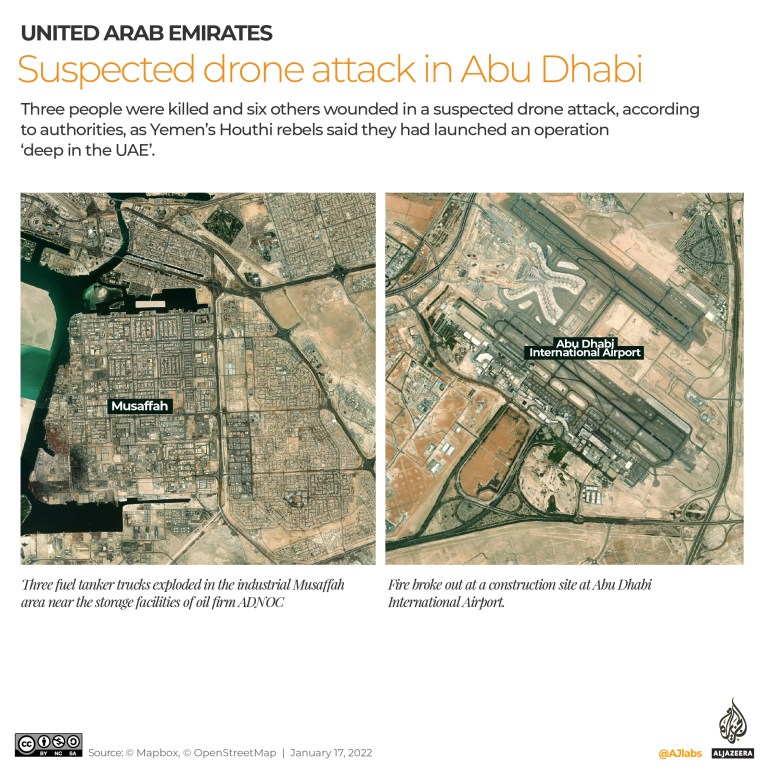 Yahya Saree, the military spokesman of the Houthis said on Monday that the group had “carried out … a successful military operation” against “important and sensitive Emirati sites and installations” using both ballistic missiles and drones.

He also urged civilians and foreign firms to “stay away from vital installations” in the UAE for “their own security”.

The Houthi attack comes two weeks after they seized a UAE-flagged ship off the Yemen coast. The UAE said the Rwabee, whose 11 crew are now hostages, was a “civilian cargo vessel”, but the Houthi claim the ship was carrying weapons.

The UAE has armed and trained Yemeni forces that recently joined fighting against the Houthis in Yemen’s energy-producing regions of Shabwa and Marib.

Yemen’s years-long conflict has caused what the United Nations calls the world’s worst humanitarian crisis, killing tens of thousands of people and leaving many on the brink of famine.