Police in the United Arab Emirates identified the dead as two Indian nationals and one Pakistani.

“Small flying objects” were found as three petrol tanks exploded in an industrial area and a fire was ignited at the airport, police said, as Houthi rebels announced “military operations” in the UAE.

Drone attacks are a hallmark of the Houthis’ assaults on Saudi Arabia, the UAE ally that is leading the coalition fighting for Yemen’s government in the grinding civil war.

The live blog is now closed, thank you for joining us. Here are the updates for January 17.

What is behind the Houthi attacks in the UAE?

Monday’s attack marks a strategic shift by the Iranian-allied rebel group that had so far avoided targeting the gulf country.

“The Houthis have claimed responsibility for this attack, and we will work with the UAE and international partners to hold them accountable. Our commitment to the security of the UAE is unwavering and we stand beside our Emirati partners against all threats to their territory,” he said.

The group’s military spokesman Yahya Saree said the missiles and drones had been launched at Abu Dhabi and Dubai airports, an oil refinery in Abu Dhabi’s Musaffah area and other “sensitive” targets in the UAE.

“The armed forces carried out … a successful military operation within the framework of an operation named Yemeni Hurricane,” Saree said in a statement broadcast on the group’s Al Masirah TV channel.

UN Secretary-General Antonio Guterres “condemns” the suspected drone attack in Abu Dhabi and calls on “all parties to exercise maximum restraint and prevent any escalation,” his spokesman said.

“Attacks on civilians and civilian infrastructure are prohibited by international humanitarian law,” Stephane Dujarric added in comments to reporters after the attack.

“The UAE condemns this terrorist attack by the Houthi militia on areas and civilian facilities on Emirati soil … [It] will not go unpunished,” the Emirati foreign ministry said in a statement.

“The UAE reserves the right to respond to these terrorist attacks and criminal escalation,” it added.

Pakistan’s foreign ministry has confirmed one Pakistani citizen was killed in an incident in the UAE, which the ministry identified as a “fire”.

“With regard to the fire involving three petroleum tankers in Musaffah, Abu Dhabi, today, we have learnt through UAE authorities that it sadly resulted in deaths and injuries. The Abu Dhabi Police has also informed our Embassy in Abu Dhabi about the demise of a Pakistani in the incident,” the statement read.

“Our Embassy is in close contact with the UAE authorities for ascertaining more details in this regard,” it added.

Bahrain condemned what it described as a “cowardly terrorist attack”.

The kingdom stands “in solidarity with the United Arab Emirates and all the measures it will take to confront such cowardly attacks,” BNA reported.

The UAE condemned a “heinous” attack it blamed on the Houthi rebels.

“UAE authorities … are dealing … with the heinous Houthi attack on some civilian installations in Abu Dhabi,” tweeted presidential adviser Anwar Gargash, referring to the Yemeni rebels.

“The tampering of the region’s security by terrorist militias is too weak to affect the stability and safety in which we live,” he added.

Houthis ‘capable of carrying out this type of attack’: Analyst

Principal MENA analyst at risk intelligence company Verisk Maplecroft, Torbjorn Soltvedt, said the Houthis have shown in the past that they are “very much capable of carrying out this type of attack”.

In previous incidents, they (UAE) have been very measured in their response to such attacks, he said. A big part of that is the “very tense security environment that we have in the region”.

“One of the big questions is … whether or not there’s been any type of direct or indirect Iranian involvement in this attack,” Soltvedt added.

An Etihad Airways spokesperson said a small number of flights were briefly disrupted at Abu Dhabi airport due to “precautionary measures”, but normal operations quickly resumed.

ADNOC says working with authorities to ‘determine exact cause’ of attack

ADNOC oil firm said an incident at its Mussafah Fuel Depot at 10:00am local time (06:00 GMT) had resulted in a fire and that it was working with authorities to “determine the exact cause”.

“ADNOC is deeply saddened to confirm that three colleagues have died. A further six colleagues were injured and received immediate specialist medical care,” it said in a statement.

Police closed the road leading to the area.

“Initial investigations found parts of a small plane that could possibly be a drone at both sites that could have caused the explosion and the fire,” Abu Dhabi police said.

Yahya Saree, the Houthi military spokesman, said in a Twitter post that an “important statement” is coming to “announce a special military operation in the depth of UAE”.

An important statement to announce a special military operation in the depth of UAE in the coming hours.

Al Jazeera’s Hashem Ahelbarra, who has reported extensively on Yemen, said that the attack comes against the backdrop of a “massive military operation which is under way now in Yemen”.

“The Saudi-led coalition said yesterday that it has been intensifying their attacks in different areas around Marib, and also major Houthi strongholds,” Ahelbarra said.

Meanwhile, the Houthis have been “frustrated” about what they say is growing Saudi-Emirati influence in Yemen, he said.

The attack on the UAE was carried out as a “show of defiance to the Saudis and the Emiratis”, Ahelbarra added.

“The Houthis are saying despite more than seven years of massive campaigns against us, we are more powerful than before … we have managed to further upgrade our military capabilities to the point that we can launch daring attacks inside Saudi Arabia and the UAE.”

Houthi spokesman to give more details ‘in upcoming hours’

Al-Attab said that according to the Houthi minister of information, these attacks are to “teach the UAE a lesson … in order to stop its involvement and participating in the Saudi-led coalition war in Yemen”.

“We know … the Houthis have also carried out some attacks to the southern areas of Saudi Arabia,” he added. 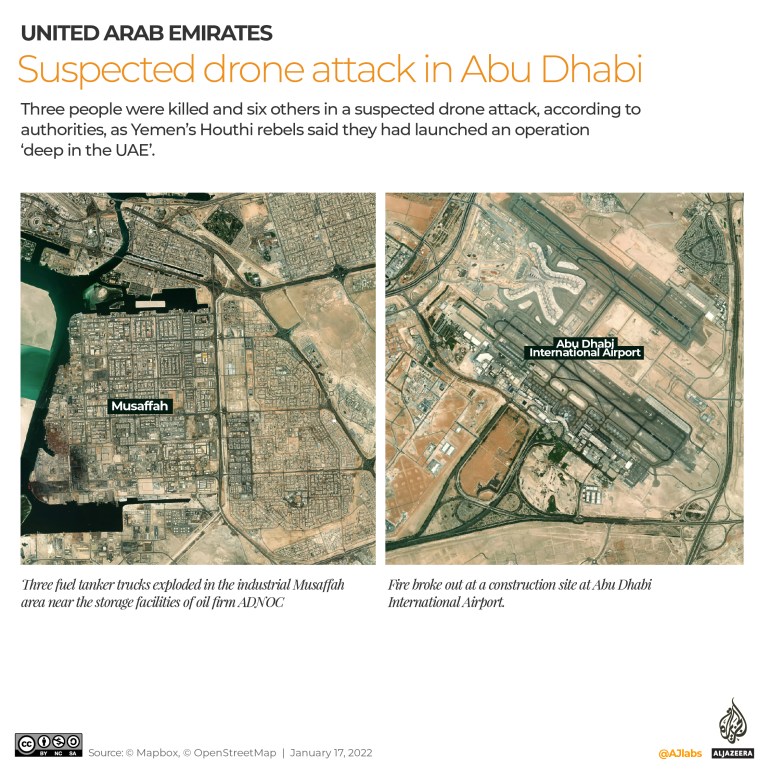 “With negotiators running out of time, the risk of a deterioration in the region’s security climate is rising,” the Reuters news agency quoted him as saying.

The military spokesman of the Houthis said the group had launched a military operation “deep in the UAE”.

More details would be announced in the coming hours, the spokesman added.

“The armed forces announced that they will announce important military operations in the UAE in the coming hours,” tweeted military spokesman Yahya Saree.

At least three people have been killed and six others wounded when three oil tankers exploded in Abu Dhabi in a suspected drone attack.

The explosions “resulted in the death of a Pakistani national and two Indian nationals, and six others sustained mild to moderate injuries,” according to state news agency WAM.

Suspected drones set off an explosion and a fire in Abu Dhabi, as Yemen’s Houthi rebels announced “military operations” in the United Arab Emirates.

“Small flying objects” were found as three petrol tanks exploded in an industrial area and a fire was ignited at the airport, police said.

Unverified footage on social media showed a thick plume of black smoke billowing from what appeared to be the Musaffah area.

The rebels have previously threatened to target Abu Dhabi and Dubai, the gleaming crown jewels of the UAE which last year opened its first nuclear power plant.

The Houthis’ latest statement comes two weeks after they seized a UAE-flagged ship, the Rwabee, off the Yemen coast, and released footage purporting to show military equipment on board.

The UAE said the Rwabee, whose 11 crew are now hostages, was a “civilian cargo vessel” and called the hijacking a “dangerous escalation” in the busy Red Sea shipping route.