The Pakistani government has welcomed a joint statement by the P5 on preventing nuclear war as “a positive development”, the country’s foreign ministry spokesperson says, a week after regional rival India issued a similar statement.

“As a responsible nuclear weapons state, Pakistan supports the objectives of global and non-discriminatory nuclear disarmament and non-proliferation,” a statement by the Pakistani foreign ministry said on Thursday, in response to the P5 statement released on January 3.

The statement quoting foreign ministry spokesman Asim Iftikhar said the P5 statement is “in line with the stipulations of the First Special Session on Disarmament of the UN General Assembly – with equal and undiminished security being the defining consideration”.

The P5 consists of the United States, the United Kingdom, Russia, China and France. 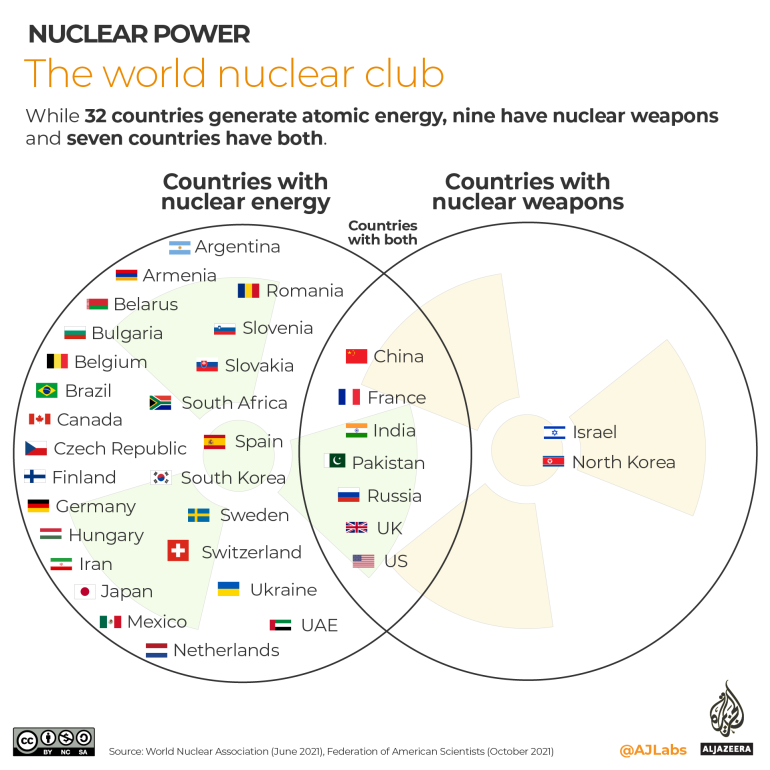 India and Pakistan have tested nuclear weapons, making them part of the eight countries worldwide that have publicly announced they possess nuclear weapons of mass destruction.

The other countries are the US, Russia, the UK, France, China, Israel and North Korea.

According to the leading nuclear weapons tracking organisation, the Federation of American Scientists, Israel is estimated to have 90 nuclear weapons. However, Israel maintains a policy of ambiguity and has never officially confirmed nor denied their existence.

India and Pakistan have refused to sign the Treaty on the Non-Proliferation of Nuclear Weapons (commonly referred to as the NPT) or to ratify the Comprehensive Nuclear Test Ban Treaty (CTBT). North Korea withdrew from the NPT in 2003.

“This will also entail eschewing misplaced notions of space for war in a nuclearised environment,” he said, a reference to India’s development of anti-satellite weapons that can be fired at objects in orbit around Earth.

“Pakistan fully agrees with the need for effective measures by all nuclear powers to guard against any unauthorised or unintended use of nuclear weapons.”

“We welcome the joint statement this week, which reaffirms the importance of addressing nuclear threats, and underscores the desire to work towards creating a security environment more conducive to progress on disarmament with the ultimate goal of a world without nuclear weapons with undiminished security for all,” said Arindam Bagchi, the Indian external affairs ministry spokesman.

Relations between India and Pakistan have been virtually frozen since a 2019 military standoff in the disputed northern region of Kashmir saw them come to the brink of another war.

Pakistan responded by carrying out air attacks of its own on targets in Indian-administered Kashmir, and the standoff only ended two days later, when Pakistan returned an Indian fighter pilot who was shot down during the skirmishes.