Kishida won 257 votes in a runoff on Wednesday to defeat Taro Kono, a popular vaccines minister who previously held the positions of defence and foreign minister.

The 64-year-old replaces outgoing party leader Prime Minister Yoshihide Suga, who is stepping down after serving only one year since taking office last September.

As the new leader of the Liberal Democratic Party (LDP), Kishida is certain to be elected the next prime minister on Monday in parliament, where his party and coalition partner control the house.

He will now lead the LDP into a general election due by November 28.

Results showed Kishida had more support from party heavyweights who apparently chose stability over change advocated by Kono, who is known as something of a maverick.

Two female contenders, Sanae Takaichi, 60, and Seiko Noda, 61, dropped out after the first round.

Kishida’s victory is unlikely to trigger a huge shift in policies as Japan seeks to cope with an assertive China and revive an economy hit by the pandemic, with the soft-spoken legislator highlighting the need to focus on reducing income disparity.

He shares a broad consensus on the need to boost Japan’s defences and strengthen security ties with the United States and other partners including the Quad grouping of Japan, the United States, Australia and India, while preserving vital economic ties with China and holding regular summit meetings.

Specifically, Kishida wants to beef up Japan’s coast guard and backs the passing of a resolution condemning China’s treatment of members of the Uighur minority. He wants to appoint a prime ministerial aide to monitor their human rights situation.

Kishida previously served as LDP policy chief and was foreign minister between 2012-17, during which he negotiated accords with Russia and South Korea, with whom Japan’s relations are often frosty.

He has called abolishing nuclear weapons “my life’s work”, and in 2016 helped bring then-US President Barack Obama to Hiroshima on a historic visit.

But despite his liberal reputation, he has been less direct than Kono on issues like gay marriage.

While Kono said he backed same-sex marriage and called for it to be discussed in parliament, Kishida said he had “not reached the point for accepting same-sex marriage”. He also took a softer stance than Kono on allowing married couples to keep separate surnames, another controversial issue.

Corey Wallace, a Japanese politics expert at Kanagawa University, said Kishida’s victory was “not a surprise”.

“I expect that Kishida and his cabinet will try to be reasonably equanimous and thus he will distribute positions throughout the factions to keep party peace,” he told the Reuters news agency.

“If he is smart and does try to address the interests of the middle class better, as he said he would, he may end up being a longer-lived premier than many are predicting,” said Wallace. “If he does not, then he may face trouble in the upper house election next year, rather than the one coming up where he should benefit from stimulus and a honeymoon period.” 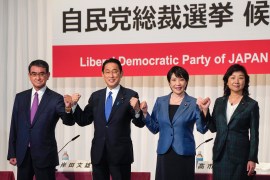 Fumio Kishida and Taro Kono to compete in a runoff after no candidate obtained a majority in an initial four-way vote. 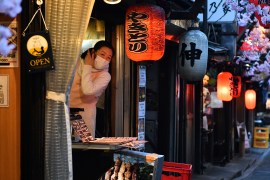 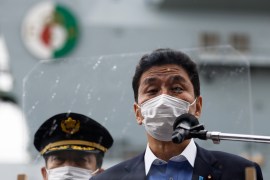 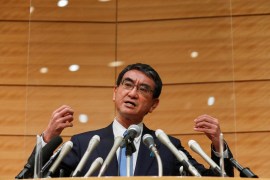