Japan is set to lift the coronavirus state of emergency this week for the first time in more than six months, in a bid to reactivate its economy as infections slow.

Japanese Prime Minister Yoshihide Suga said on Tuesday his government had decided to lift the coronavirus emergency measures in all regions as the number of new COVID-19 cases continue to drop.

Japan’s current state of emergency, declared in April, was repeatedly extended and expanded, turning into the longest since the pandemic began last year. It will not be renewed upon expiry at the end of the month.

“Lifting of the emergency doesn’t mean we are 100 percent free,” Shigeru Omi, a top medical adviser for the government, told The Associated Press news agency. “The government should send a clear message to the people that we can only relax gradually.”

Restrictions had included requesting restaurants and bars to open for shorter hours and not serve alcohol. Japan avoided the more restrictive lockdowns imposed elsewhere while recording about 1.69 million cases and 17,500 deaths from COVID-19.

The government is in transition as the governing party chooses a replacement for Suga later this week. Suga decided to step down from party leadership and the premiership after facing criticism over his government’s virus measures and his insistence on holding the Olympics during a pandemic despite public opposition.

It is now under pressure to maintain effective virus strategies ahead of parliamentary elections in two months.

Economy and Fiscal Minister Yasutoshi Nishimura, also in charge of COVID-19 measures, said eateries and other commercial establishments will return to normal hours gradually, as the forthcoming winter season raises concerns about a resurgence in contagions in indoor spaces.

The government is preparing to set in place new measures, including vaccine passports and virus tests, to contain the spread of the virus.

Japan’s daily reported cases have fallen to about 2,000 nationwide – less than one-10th of the mid-August peak, when coronavirus infections surged at an unprecedented pace.

Experts have attributed the declining numbers to the progress of vaccinations and to people increasing their social distancing. About 56 percent of the population has received full immunisation.

Vaccinations minister Taro Kono recently said Japan is also preparing to start administering third shot boosters to medical personnel by the end of this year and to elderly people early next year. 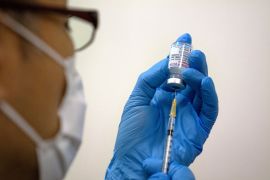 US company says it does not expect ‘undue risk to patient safety’ and is working to recall three batches of vaccine. 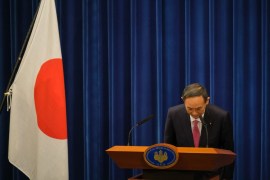 Japan’s Prime Minister Suga to drop out of party election

Japanese leader saw his support sink below 30 percent as the nation struggles with its worst wave of COVID-19 cases. 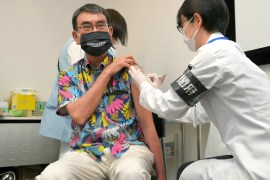 Japan yearns for charisma as race to replace Suga heats up

Vaccine tsar Taro Kono is popular with the public, but needs support from the ruling party’s local members.