The Democratic Current party, Ettakatol (FDTL), the Republican Party and Afek Tounes announced the formation of the coalition in a news conference on Tuesday.

The secretary-general of the Democratic Current party, Ghazi Chawashi, said that the objective of the coalition is to express the refusal of the monopolisation of power.

He said Tunisia is witnessing a dangerous period that may lead to the collapse of the state and the end of democratic transitions.

On Wednesday, Saied gave himself the power to rule by decree, two months after sacking the prime minister, suspending parliament, and assuming executive authority.

While many Tunisians have backed Saied and see his actions as necessary to remove a corrupt and unpopular political elite after years of economic stagnation, his critics from across the spectrum have said he is inexperienced and uncompromising.

Chawashi said that if Saied “insists on his decisions”, the coalition would apply pressure and “exercise all peaceful means of protest”.

Speaking from Tunis, Al Jazeera’s Bernard Smith said the coalition has stated they are open to talks.

“They are saying they want the president to appoint a government,” Smith said. “[Saied] hasn’t yet done that or articulated any comprehensive economic policy or how the government’s going to finance the debt.

“At the same time, there has been a statement from civil society warning the president of the dangers of going too far and taking over power without saying how long he would hold onto the reins of power,” he added.

“This is not democracy. Yes, we can amend the Constitution, within a quiet dialogue, away from any crisis, with the participation of all parties. We need to evaluate everything, agree [on] everything, and go back to the people for a referendum on these amendments,” he added.

“The president has given himself the right to do whatever he wants.”

Last week, other parties called for an end to what they called “a coup” after Saied took control of legislative and executive powers. In a joint statement, Attayar, Al Jouhmouri, Akef Tounes, and Ettakatol parties said that Saied’s move enshrined an absolute power monopoly.

But Ennahdha – the biggest party in parliament – has not joined the latest coalition. More than 100 senior members have resigned, accusing Ghannouchi of failing to form a united front to oppose Saied and confront the country’s political crisis.

Ahmed Gaaloul, a member of Ennahdha’s executive committee, said the political party was the first to declare Saied’s actions a coup.

“The next move is that all political parties in the country – and Mr Saied if he accepts – need to sit down at a table and decide the future of our country and the future of democracy,” Gaaloul told Al Jazeera.

“We need to sort out the social and economic problems which are endangering other Tunisians in society and which became more problematic after Mr Saied’s coup,” he added, saying a state of dictatorship is not acceptable. 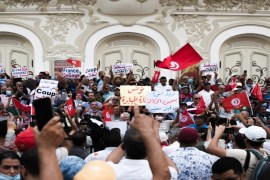 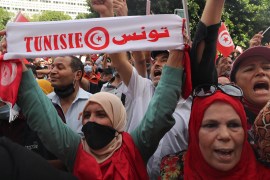 Tunisians rallied in the capital to protest President Kais Saied’s steps to tighten his grip on power. 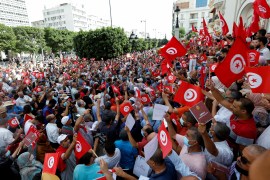 Protesters are calling on President Kais Saied to resign after he announced he would rule by decree.