In the latest move tightening his grip on power, Tunisian President Kais Saied this week announced a string of measures that effectively allow him to rule by decree.

The former constitutional lawyer said the decrees, which were published in the official gazette on Wednesday, were aimed at averting a national emergency.

The provisions mean the continued suspension of the elected parliament’s powers and the suspension of all politicians’ immunity from prosecution – moves that were taken on July 25 when Saied sacked the prime minister, suspended parliament and assumed executive authority.

They also stipulate the freezing of politicians’ salaries as well to enable him to rule by declaration alone, ignoring parts of the constitution.

The moves were instantly rejected by Saied’s opponents and sparked warnings of further political instability amid growing opposition.

Tunisian analysts said the president’s interventions undermine democratic gains made in the 2011 revolution against autocratic rule and the changes it brought about.

“The latest decrees completely contradict the 2014 constitution which established a parliamentary system,” said Adnen Mansar, president of the Center of Strategic Studies on the Maghreb (CESMA), adding that the decrees were in line with the 1959 constitution overturned by the uprising a decade ago that triggered the so-called Arab Spring.

“This move puts a plug on the principles of a democratic system,” he said.

“After Saied put the whole country on hold for about two months … he has now produced a set of rules that basically say he holds every form of power, over every aspect of the private life of citizens, ruling over every public and private institution, with no form of checks and balances,” said Hachicha.

“The rule of one person is the opposite of democracy. We paid a high price to learn that and that’s what people rejected in 2011,” she added.

Saied, who won a landslide victory in a 2019 presidential election, has denied having dictatorial aspirations and insists his moves are constitutional.

Shortly after Wednesday’s announcement, Rached Ghannouchi, the leader of the Ennahdha party, the largest force in the now-suspended parliament, said the move meant cancelling the constitution and urged Tunisians to take to streets in a “peaceful struggle”.

Osama al-Khalifi, a senior official in Heart of Tunisia, the second-largest party in parliament, accused Saied of conducting a “premeditated coup”.

“We call for a national alignment against the coup,” he said on Twitter.

Four other Tunisian parties – Attayar, Al Jouhmouri, Akef and Ettakatol – also rejected Saied’s move, saying on Thursday the decrees enshrined an absolute power monopoly and that the president had lost his legitimacy.

Anour Ben Kadour, a senior official in the influential UGTT labour union, which has about one million members and is a major force in Tunisian politics, said: “Tunisia is heading towards absolute individual rule.”

The UGTT later issued a statement calling on Saied to consult with experts before making decisions rather than “consulting his friends”.

Saied’s first moves two months ago came after years of political turmoil and a crippling economic crisis, including soaring inflation and high unemployment, as well as surging COVID-19 infections.

The young democracy had often been cited as the sole success story of the series of uprisings that triggered what became known as the Arab Spring.

But a decade on, Saied faced little popular resistance to his July 25 intervention as Tunisians felt frustrated by the government’s handling of the coronavirus pandemic and saw little improvement in their living standards.

Analysts said the situation has since changed, however.

“Over the weeks, impatience grew and most actors have demanded clarifications and a road map,” she explained, adding that the latest decisions “provided no such thing”.

According to Mansar, there is “serious concern” among civil society and political groups, despite many of them supporting the July 25 move.

“The latest move has, in fact, created a one-man rule,” said Mansra. “The response of political and civil society groups indicates Tunisia’s entry into a new phase of political instability,” added Mansar.

Civil society groups, political actors and unions have already started calling for demonstrations to reject the presidential changes, raising the prospect of a “season of protests and counterprotests” which will have a negative effect on the economy, Ferjani told Al Jazeera.

“The price of Tunisian staples will likely rise in price, so more uncertainty for the poorest Tunisians,” he said.

But “with no real political leadership, a fragmented political scene, and a divided society”, Hachicha said it was hard to tell if they will be successful in overturning Saied’s decisions. 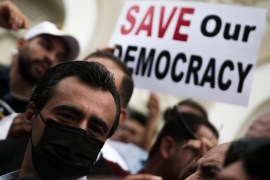 Saied has held nearly total power since July 25 when he sacked the PM and suspended parliament. 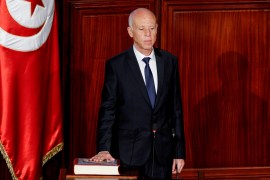 Provisions laid out in a series of decrees almost two months after Saied sacked the government and suspended parliament. 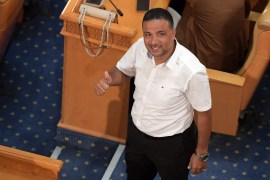 The rulings come amid growing concerns for human rights after the president seized governing powers in July.