Macron’s office said the leaders spoke by phone on Friday, days after Johnson told France to “get a grip” and give him a break.

Johnson had been responding to French anger over a new agreement brokered between the United Kingdom, United States and Australia which officials in Paris say sidelined them.

The pact for the Indo-Pacific region, dubbed AUKUS, led to Australia scrapping a multibillion-dollar deal with France to build conventional submarines.

It will instead acquire at least eight nuclear-powered submarines with US and British technology.

Friday’s talks between Macron and Johnson were called by the British PM, the Elysee Palace said.

During the call, Johnson told Macron that London hoped to work with Paris “in line with our values and our common interests,” on issues such as the battle against climate change, securing the Indo-Pacific region and the fight against “terrorism”, the Elysee Palace said.

Macron replied that he would wait to see Johnson’s proposals, his office added.

A spokesperson for Johnson said the prime minister and Macron had “reaffirmed the importance of the UK-France relationship”.

“They agreed … to continue working closely together around the world on our shared agenda,” the spokesperson added.

Friday’s talks could indicate that the diplomatic crisis between France and its longtime allies may be easing.

On Wednesday, Macron and US President Joe Biden spoke by telephone for the first time since the falling out.

The two leaders agreed to coordinate more closely in the Indo-Pacific, where the growing influence wielded by China has worried Western powers, and to meet in Europe at the end of October.

Paris also confirmed it would send its ambassador back to Washington in the coming days.

France recalled its ambassadors from the US and Australia over the AUKUS row last week, saying it was blindsided by Australia’s decision to ditch its 2016 contract for French diesel submarines and develop vessels with the US and UK instead.

No such step was followed for London.

French defence minister Florence Parly did, however, pull out of scheduled talks with her British counterpart, Defence Secretary Ben Wallace, which had been set to take place in London this week. 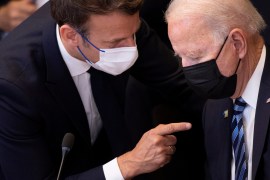 President Biden trying seeking to calm France down amid fallout from AUKUS security pact between US, UK and Australia. 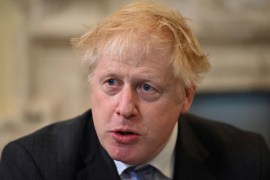 Boris Johnson tells Paris to ‘give me a break’ amid French fury over new security pact between UK, US and Australia. 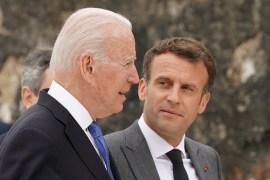 France will send its ambassador back to US, joint statement says, after diplomatic spat over Australia submarine deal.