Beirut, Lebanon – Tens of thousands of children are “wasting away” amid widespread violence and threats in two refugee camps in northeast Syria, Save the Children says, and it is “more urgent than ever” that foreign governments repatriate their citizens living there.

In a new report published on Thursday, the international NGO highlighted the deteriorating living conditions in the al-Hol and Roj camps – citing minimal access to education, skyrocketing child labour, and surging violence and murders.

So far this year, 62 children have died in al-Hol.

“The scale of the violence, hardship, deprivation and trauma that children living in these camps experience every day cannot be overstated,” the report – titled When am I going to start to Live? – read.

Children, many of them unaccompanied, make up roughly two-thirds of the estimated 60,000 people living in the camps.

Fires have been the most common causes of children dying, with families using heaters and stoves in their tents for warmth and to cook food, causing a dangerous fire hazard. Children have also been victims of murder, sexual assault, and other crimes. 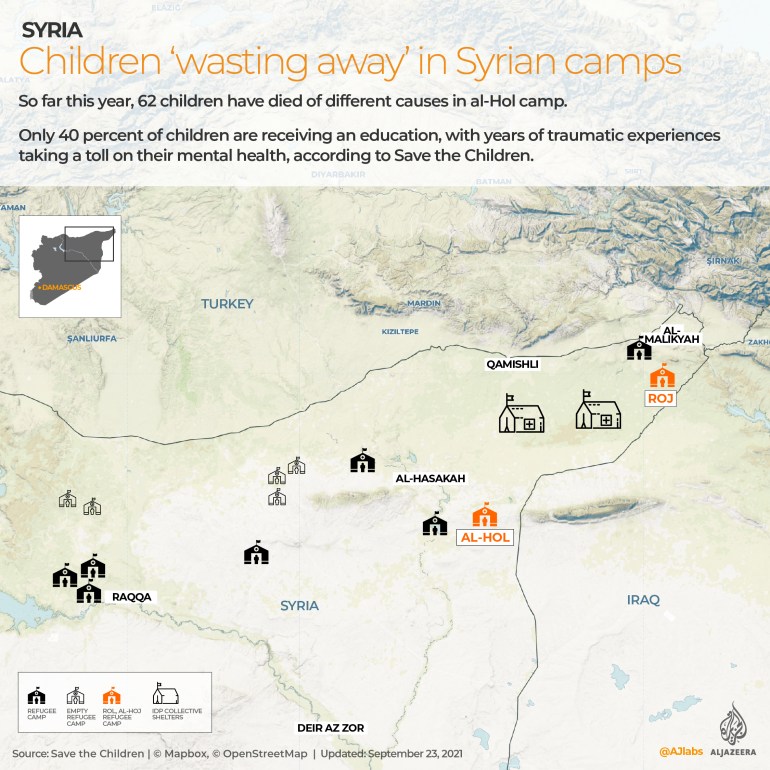 Bushra*, 10, from Turkey, told Save the Children she feared living in al-Hol.

“The people here keep fighting. I close my ears with my hands whenever I hear them fight. I don’t even let my mother go outside as they will draw knives at each other. They also swear at and threaten each other, saying ‘I will rip your face, I will cut your head,'” she said.

The population of the camps, run by the Kurdish-led administration in northeast Syria, is mostly families who lived under the rule of the ISIL (ISIS) armed group, and others who fled from a military offensive by the international coalition.

While the majority are Syrian and Iraqi, the report primarily focuses on foreign nationals from some 60 countries around the world.

According to the NGO’s report, many wealthy governments of foreign detainees in the camps have neglected their obligations under international law to repatriate them – especially the children and families.

“Kazakhstan alone accounts for 36 percent of repatriations, and over three times more than all EU countries, UK, Norway, Canada, Australia and the US combined,” the report read.

The UK has repatriated four children with about 60 believed to remain in the camps, while France has brought home 35 children, with at least 320 children left behind, Save the Children said.

While about 1,163 children have been repatriated since 2017, only about 14 repatriations have taken place this year.

“Save the Children demands that all governments with nationals in the camps take responsibility and bring children and their families home,” the report said.

“Every day that foreign children and their families are failed by their governments, every day they are denied the opportunity to return to their home, denied the specialised services they so desperately need and denied the right to live in safety and recover from their experiences is a day too many.”

An atmosphere of ‘fear and violence’

Samiya*, an 11-year-old girl from Tajikistan who has been living al-Hol for two years with her mother and four siblings, told Save the Children she saw a fire destroy or damage 75 tents in May.

“We heard voices of people screaming all of a sudden. A fire had broken out in our section. The tents started to burn one after the other. They melted completely. All children were running away, screaming and crying,” she said.

“Our tent was burned as well. My new clothes which my mother had bought for me got burned. My toys and hair ribbon, all the sweets for Eid, everything got burned. Now we are sleeping in the kitchen and waiting for our new tent.”

Human rights organisations have likened the volatile camps to detention centres. Some men and boys, who are perceived to be linked to ISIL, are held in prisons in the camps.

Other humanitarian agencies present in al-Hol and Roj have also expressed their concerns about the wellbeing of children and other residents at the camps.

Pauline Lenglart, an advocacy manager at Doctors Without Borders (MSF), says camp residents live in an “atmosphere of fear and violence”.

“Access to protection is almost impossible … there are killings on a daily basis,” Lenglart told Al Jazeera. “All people there would be deemed at risk.”

“They are fearing for their life,” she said.

The Norwegian Refugee Council (NRC) also told Al Jazeera that an armed man entered one of their education centres in al-Hol, threatened their staff, and asked for money.

“This serious incident has regretfully forced us to suspend our activities to ensure the safety of our colleagues,” Bahia Zrikem, policy and advocacy adviser for the NRC’s Syria Response Office, told Al Jazeera.

“We condemn this criminal behaviour which, besides targeting aid workers, is also depriving families who are badly in need of our services.”

*Names have been changed.