Philippine President Rodrigo Duterte struck a typically combative tone as he addressed the United Nations, insisting the Philippines will hold wrongdoers in his deadly so-called drug war “accountable” after the UN-backed International Criminal Court (ICC) began an investigation into the killings.

Duterte’s video address to the UN General Assembly on Tuesday, the last of his presidency, comes just days after the ICC formally authorised an investigation into alleged “crimes against humanity of murder” linked to his “war on drugs”.

Duterte defended his policy in his speech, saying those found to have “acted beyond bounds” of the Philippine law will be held accountable, while indirectly rejecting the ICC investigation.

He added that he had already ordered a review of the conduct of the campaign, and the files of the suspected drug dealers were being looked at by the Department of Justice.

Duterte also said that his government was working with the UN Human Rights Council to look into the cases.

The latest Philippine government data released in June shows that as of the end of April 2021, at least 6,117 suspected drug dealers had been killed during police operations. But human rights groups and activists say the number could be as high as 30,000, and many people were summarily executed, including children.

Duterte has previously said that he will not submit himself to a foreign tribunal and that the Philippines will not cooperate in the ICC investigation into the so-called drug war.

On Tuesday, he appeared to refer to the investigation saying: “Meaningful change, to be enduring, must come from within.”

“The imposition of one’s will over another – no matter how noble the intent – has never worked in the past. And it never will in the future.”

In recent days, rights groups have alleged that Duterte is paying “lip service” to the investigation in order to escape international prosecution.

DUTERTE AT THE UN:
* "Those who went out of bounds (in #drugwar) will be held accountable"
* Philippines-UN rights program is "model for constructive engagement"

REALITY ON THE GROUND:
* Only 1 out of 1000s of police killings resolved
* PH-UN program has not stopped the violence pic.twitter.com/Q5Wb4WaLY1

Duterte ran for president in 2016 on a single issue of fighting crime in the Philippines. During his campaign and later on as president, he repeatedly urged police to “kill” drug suspects.

The outgoing Philippine president also used his speech to call for reform of the UN and to criticise the Security Council.

“Democracy and transparency are concerns that reverberate in the halls of the UN but ironically the Security Council, the pinnacle of your structure, violates every tenet of these values. It is neither democratic nor transparent in its presentation and processes,” Duterte said in his recorded message.

The Security Council has five permanent members – China, France, Russia, the United Kingdom, and the United States – which have veto powers. The 10 remaining seats are rotated among UN member states every two years.

In his almost six years in office, the Philippine leader has repeatedly lashed out at the UN, calling it “inutile” and threatening to “burn” the organisation down. He has also hurled personal insults at UN officials, calling former human rights chief Zeid Ra’ad al-Hussein an “idiot” and referring to former human rights investigator Agnes Callamard as a “fool” and a “whore”.

On Tuesday, Duterte said “effective global governance” was needed and that the UN had failed to rise to the task.

“The UN is a product of an era long past. It no longer reflects the political and economic realities of today,” he said.

“If the UN is to lead the world out of the many crises we face, things need to change. The UN must empower itself by reforming itself. Therein lies the hope of humanity.” 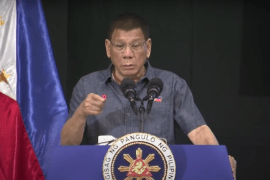 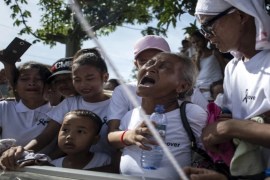 Fatou Bensouda says there is basis to believe ‘the crime against humanity of murder’ committed in president’s drug war. 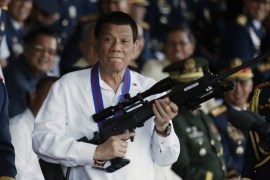