Ukrainian President Volodymyr Zelenskyy will have his first visit to the White House on Wednesday, in a meeting Kyiv hopes will bolster security ties between the two countries, increase Ukraine’s position to join NATO and provide a platform to voice discontent about the Russia-to-Germany Nord Stream 2 pipeline.

The visit, for both Zelenskyy and US President Joe Biden, will also likely serve as a palate cleanser after the recently elected Ukrainian president found himself in a starring role in the 2019 impeachment investigation into former US President Donald Trump.

Trump was accused of conditioning military aid to Ukraine – and a White House visit – in exchange for Zelenskyy digging up dirt on Biden’s son’s role at the Ukrainian energy firm Burisma.  The investigation indicated that Zelenskyy, a former comedian eager to display foreign policy clout, had resisted.

“This visit is important to Zelenskyy because Trump brought him into the domestic political debate, there has been some concern there could be tensions between the Ukrainian leader and the Biden administration,” Olexiy Haran, a professor of comparative politics at the University of Kyiv Mohyla Academy, told Al Jazeera.

“But that didn’t happen, because first of all, he resisted Trump’s pressure, and secondly, Biden and his people in the State Department understand the importance of Ukraine,” he said.

The visit comes as the Ukrainian population has increasingly turned against Russia – and towards European integration – following Moscow’s 2014 annexation of Crimea and the Biden administration has sought to bolster transatlantic ties, particularly against Russia.

Wednesday’s meeting also comes after US Secretary of State Antony Blinken visited Kyiv in May, shortly after Biden pledged “unwavering support” for Ukraine amid a Russian troop build up along the country’s eastern Donbas region.

While Zelenskyy will likely seek agreements in security, space exploration, and support for Ukraine in light of the Nord Stream 2 project, the visit alone will likely “raise Zelenskyy’s profile within his country”, Haran added.

On Tuesday, Ukrainian Foreign Minister Dmytro Kuleb told The Associated Press news agency he was hopeful the US trip would “bring the strategic partnership between Ukraine and the United States to the next level”, adding that a push for a stronger US security assistance “will be absolutely crucial and absolutely central to all discussions”.

Despite a 2015 peace agreement brokered by France and Germany, there have been regular skirmishes between Ukrainian and Russian forces along the border. More than 14,000 people have been killed in the fighting since 2014.

Washington has provided $2.5b in military assistance to Kyiv since 2014, he added.

Meanwhile, Yuriy Vitrenko, the head of Ukraine’s state-controlled Naftogaz oil and gas company, told The AP news agency that Zelenskyy would urge the US to place tougher sanctions on companies supporting the Nord Stream 2 gas pipeline, which runs from Russia to Germany.

The US had opposed the pipeline, which critics argue would increase the Kremlin’s leverage over Europe, while depriving Ukraine of lucrative transit fees, before reversing its position in July.

“We’ll be very, very loud, because it’s a matter of national security for Ukraine, for the region, and we believe for the US, as well,” Vitrenko said.

The Biden administration, for its part, is expected to continue to pressure Ukraine to address endemic corruption that has long plagued the government.

Last week, Human Rights Watch called on the US to link aid to human rights in Ukraine, with senior researcher Yulia Gorbunova calling for greater reforms to the Security Services of Ukraine, which has been accused of repeated abuses, calling for Zelenskyy to sign legislation that brings Ukraine’s legal framework in line with international standards on war crimes and crimes against humanity, and pressuring Ukrainian authorities not to “ignore or minimize the threat of violence by far-right nationalist groups”.

The White House has said the meeting will bolster the US’s “unwavering support for Ukraine’s sovereignty and territorial integrity in the face of Russia’s ongoing aggression in the Donbas and Crimea, our close cooperation on energy security, and our backing for President Zelenskyy’s efforts to tackle corruption and implement a reform agenda based on our shared democratic values”.

Addressing corruption has long been a condition cited by the US and European powers for Ukraine to move towards further integration with Europe, including gaining long-sought admission to NATO.

During a NATO summit in June, Zelenskyy called on Biden to give a clear “yes” or “no” answer to Kyiv’s request for a Membership Action Plan – an official path to enter the alliance.

Biden responded that it was not yet clear if Ukraine had made enough progress in addressing corruption or meeting other criteria.

Still, many observers have noted that corruption is not the only concern for NATO, with members reluctant to put Ukraine on a pathway to joining when it remains engaged in a low-level hot conflict with Russia over Crimea on its eastern border.

“That may seem unfair in Kyiv,” wrote Brookings Institution senior fellow Steven Pfifer last week, “but it is the reality.” 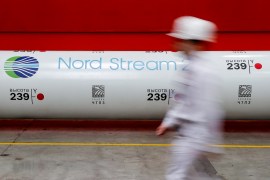 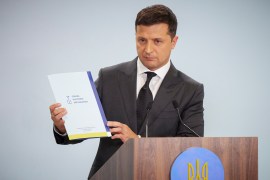 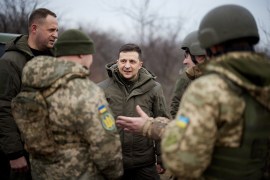 The phone call comes as Western nations and NATO express concern over Russian troop movements near the Donbass region.