The case of Belarusian Olympian Krystsina Tsimanouskaya has gripped the world since Sunday, when the 24-year-old sprinter accused her Olympic team of taking her to Tokyo airport to be flown home against her wishes after she criticised its management.

Tsimanouskaya has claimed she was warned by Belarusian officials that she would face “punishment” upon returning home from the Tokyo 2020 Olympics.

Fearing for her safety, she sought the protection of Japanese police at the airport instead of boarding the Belarus-bound jet and later made for the Polish embassy in Tokyo as reports abounded that she was seeking asylum in Europe.

She has since been granted a humanitarian visa by Poland’s government.

Here’s what you need to know about her case:

What sparked the standoff?

Tsimanouskaya said the standoff began after she criticised how officials were managing her team, setting off a huge backlash in state-run media outlets in her native Belarus, where longtime President Alexander Lukashenko has overseen a sweeping crackdown on dissent since a contested August 2020 election.

The runner said in a video posted on her Instagram account that her coaches had registered her for the 4×400 metres relay event – even though she had not trained for such a race – after some team members were found to be ineligible to compete because they had not undergone sufficient doping tests.

She said she was then barred from competing in the 200 metres event scheduled to take place on Monday and withdrawn from the games altogether by her team’s officials.

Tsimanouskaya claims she was later taken to Tokyo’s Haneda airport but she refused to board the plane and sought the protection of Japanese police.

The Belarusian Olympic Committee said coaches had decided to withdraw Tsimanouskaya from the Games on doctors’ advice about her “emotional, psychological state”.

Where is Tsimanouskaya now?

Poland granted her a humanitarian visa on Monday and she is currently residing in the Polish embassy in Tokyo.

She is expected to depart Japan on Wednesday and travel to the Polish capital, Warsaw.

She is set to be reunited there with her husband, who fled Belarus amid this week’s developments and now reportedly plans to seek refuge in Europe, as well.

Polish officials, the Japanese government and International Olympic Committee (IOC) have all said Tsimanouskaya is “safe” in the embassy building.

The athlete herself has called for a thorough investigation into her withdrawal from the Tokyo Games and for possible sanctions against those who she claims “deprived” her of the “right to compete”.

She stopped short of calling for action against the wider team, however, stating that Belarus’s athletes “aren’t guilty of anything and … should keep competing”.

Tsimanouskaya’s remarks came as the IOC announced it had launched a formal investigation into her case and said it expected a report later on Tuesday from the Belarusian team.

Belarus’ National Olympic Committee told a state-run news agency that it was closely monitoring the situation and cooperating with the IOC.

Poland denounced what it branded a “criminal attempt” to kidnap the athlete.

German Foreign Minister Heiko Maas said the “attempted kidnapping” of Tsimanouskaya highlighted “the rulers in Minsk … scorn their own athletes and with this, also the Olympic principles.”

“Sportsmanship and solidarity are stronger than the violence which Lukashenko uses to cling to power,” Maas said. 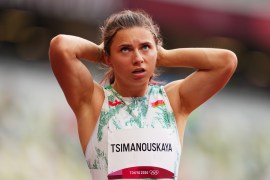 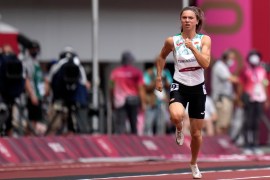 A Belarusian sprinter who refused her team’s orders to return home has been granted a Polish humanitarian visa. 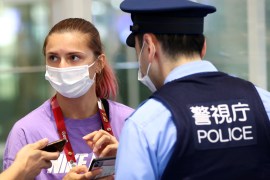