Tehran, Iran – Shortly before Iran and the United States, along with other world powers, are expected to head back to Vienna for nuclear talks, Supreme Leader Ali Hosseini Khamenei said “predatory wolf” President Joe Biden is no different from his predecessor.

Khamenei blasted the “shameless” behaviour of the US on Iran’s 2015 nuclear deal on Saturday, saying it behaved as if Iran left the accord, while the Americans in 2018 unilaterally withdrew from it, imposing harsh sanctions.

He also slammed the European signatories to the deal, saying, “they are like the US as well, but in words and rhetoric they are always demanding, as if it was Iran that for long ridiculed and undermined negotiations”.

The supreme leader’s remarks came during his first visit with President Ebrahim Raisi’s cabinet, which gained a sweeping vote of confidence by the country’s hardline parliament on Wednesday.

On Friday, Iran’s new foreign minister, Hossein Amirabdollahian, had his first phone call with the European Union’s foreign policy chief Josep Borrell, during which Borrell called on Iran to commit to a date to come back to Vienna for talks on restoring the nuclear deal.

While Iran has said it will at some point come back to continue six rounds of talks that ended on July 20, a specific date has yet to be determined.

While the Biden administration has said it wants to return to the nuclear deal, the US president is still enforcing Trump’s “maximum pressure” campaign as he has refused to lift any sanctions before an agreement is reached in Vienna.

Iranian and American officials have so far clashed on how and what sanctions need to be lifted, and how Iran needs to scale back its nuclear programme again. Iran is currently enriching uranium to 60 percent, its higher ever rate.

Khamenei’s remarks on Saturday appeared to be a double down on Iran’s position before the two countries, in addition to European powers and Russia and China, head back to Vienna.

The supreme leader specifically directed Raisi’s cabinet to plan for managing the country’s ailing economy with the assumption that US sanctions will remain in place.

Instead, Khamenei said Raisi and his team must focus on boosting “economic diplomacy”.

The appointment of Amirabdollahian, a veteran diplomat with a focus on regional affairs, is indicative of that orientation. The foreign minister, who is now in Baghdad to participate in a significant regional summit orchestrated by Iraq, has said he aims to craft an “Asia-centric” foreign policy agenda.

The supreme leader on Saturday said the best example that the US is a wolf and “at times acts as a cunning fox” is the current situation in neighbouring Afghanistan.

Khamenei expressed his sorrow at the suicide bombing outside the Kabul airport on Thursday, which killed dozens of Afghans and 13 US personnel, saying “these problems and difficulties are the work of Americans that for 20 years occupied the country and imposed a variety of cruelties on its people”.

“The US didn’t take a single step for the advancement of Afghanistan. If today’s Afghanistan is not behind in terms of social and civil developments compared to 20 years ago, it is not ahead.”

As the Taliban has taken control of almost all of Afghanistan, Khamenei said Iran supports the people of the country because, as before, governments come and go but the people remain. 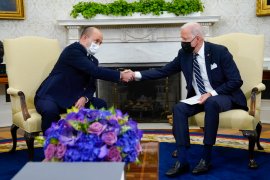 Bennett ‘happy’ as Biden touts ‘other options’ against Iran

Israel’s Naftali Bennett refrains from mentioning Palestinians in remarks ahead of meeting with Joe Biden. 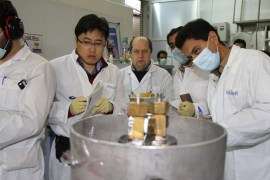 US calls on Iran to halt ‘nuclear escalations’ 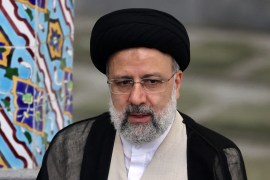 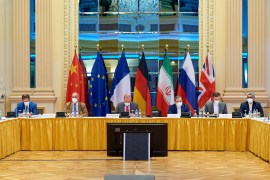 Sanctions come as talks stall between the Biden administration and Iran on restoring the 2015 nuclear deal.