Kabul, Afghanistan – After more than a week of closures, banks in Afghanistan are starting to reopen, drawing crowds of hundreds of people eager to finally have physical cash in their hands once again.

Financial institutions in Kabul largely shut on the afternoon of August 15, just before the former President Ashraf Ghani fled and the Taliban arrived in the capital.

Initially, the closings were in response to fears that the group’s arrival in the city would see bloodshed and looting. As the days passed, though, the banks remained shuttered due to Washington’s decision to cut off access to $7bn of the Afghan Central Bank’s gold and cash reserves in the Federal Reserve. The International Monetary Fund also cut off access to $460m in funds allocated this week.

These cancellations came just days after tens of thousands of people had flocked to banks and ATMs across the capital to withdraw as much of their money before the impending Taliban arrival as possible.

In a cash-based society like Afghanistan, the dual blows of being without paper money for even a few days and the downfall of yet another regime, left people fearing not only for tomorrow but the weeks and months ahead.

Massoud, 35, has spent the last 10 days in Kabul wondering how to provide for his family in the Northern province of Kunduz. He has 20,000 Afghanis ($232) in the bank, from his time in the Afghan Military, but even with the banks reopened, accessing it could take several more days.

‘No source of income’

By 10am on Wednesday, he had already waited four hours in line and was still unable to get inside the physical bank building itself. To make ends meet in the capital, he has been working as a day labourer, but with a business having ground to a near halt, he has little luck securing enough work to return to Kunduz.

Massoud, who was stationed in the southern province of Kandahar, said he earned that money serving his country in the most difficult circumstances.

“We came under siege so many times. We had to fight without food and water. And yet, because the government decides to give up and leave, we are left without access to the money we fought for,” he said, referring to the fact that many well-known members of the former administration also fled the country.

He is not the only member of the Afghan National Security Forces in line. Standing next to Massoud is Abdul, a fellow soldier who was stationed in a district of Kabul province. He said now that the Taliban has taken over security responsibility in the country, most of the ANSF wonder if this will be the last time they will ever pick up a salary.

Abdul and Massoud both said making their money stretch for 10 days was difficult, but possible. What they feared though, is the months ahead, when they may have no source of income whatsoever.

“We don’t know if we’ll have jobs anymore or if we’ll ever earn another Afghani again to feed our families.”

Customers outside the bank told Al Jazeera most people can rely on relatives and colleagues for small loans in times of need, but that is not sustainable, especially as private offices continue to shut and commercial ventures have also seen their customers dwindle since the Taliban took over.

The Taliban has been slow to reopen government offices as it has yet to announce an administration and leadership structure. Last week, the group said the Ministry of Finance would assure payments of all Afghan civil servants, but many in the government remain sceptical of the Taliban’s promise.

One worker at the Ministry of Finance told Al Jazeera he had not been in the office since the Taliban takeover 10 days ago, “I’m not even sure if they need me,” he said not wanting to reveal his identity.

On Monday, the Taliban appointed Mohammad Idris as acting governor of the Central Bank, but restoring confidence among consumers and investors will prove to be a long road for the group.

Abdul said, “We don’t know if there will be anymore military or what the government will be, how can we be certain they will pay us?”

‘The banks are the new airport’

Wafiullah worked for several years at the Ministry of Counter-narcotics, which was eventually folded into the Ministry of Interior. He spent four hours in line to withdraw 150,000 Afghanis ($1,742) left in his account.

Though there are eight people in his household, he said he was lucky because he managed to have about three months of cash on hand. But like so many others in line, he cannot be certain that he will have a job in the future, nor does he have faith the banks will be able to keep up with the rush of people looking to withdraw as much of their money as possible.

On the same day, the banks reopened the World Bank announced that it too would join the IMF and the United States in cutting off assistance to the current Taliban-led state.

Economic advisers and business people told Al Jazeera that all of these cancellations and sanctions will make the financial situation untenable for the Taliban and that they will have to find a way to earn trust and re-enter global markets.

The stress of not knowing how long the money will last, coupled with the hours of waiting finally took its toll on the crowds waiting outside the New Kabul Bank in the city’s Shahr-e-Naw neighbourhood.

After so much time in line out on the street, the crowd began to smash the windows in front of the corridor that led to the interior of the bank itself. As the glass shattered, the crowd started to cheer and scream, while others took the confusion as an opportunity to try and jump the line. That led to scuffles.

One customer in line looked at the disarray and said, “The banks are the new airport,” referring to thousands of people who have gathered outside the entrances to Kabul’s Hamid Karzai International only to face violence and intimidation from Taliban, CIA-backed Afghan forces and foreign militaries. 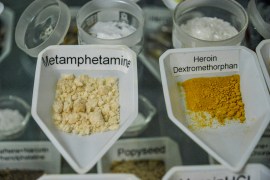 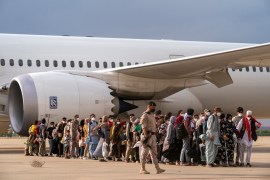 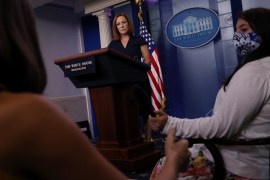