Galicia, Spain – Joam Evans and his family live in Froxan, a small village in the mountains of Galicia, an autonomous region in Spain’s northwest.

To get there, one has to drive uphill through a maze of empty rural roads flanked by oaks, chestnuts, pines and a large number of eucalyptus trees.

Recent weeks have been extremely hot as a heatwave gripped southern Europe, but when this reporter travelled to the region, there was drizzle and a thin layer of mist covered the landscape.

“I think the rain will respect us,” he said in Galician, the local language, grey clouds above him. 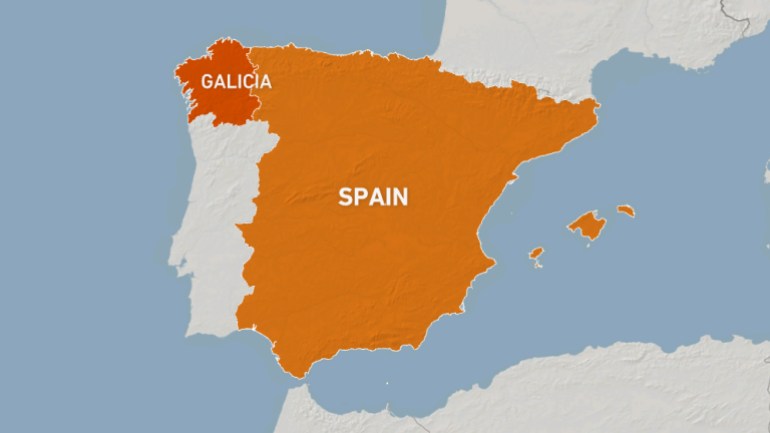 The volunteers come from across Galicia, home to about three million people.

They have signed up to work in the public land that surrounds Froxan, to removing eucalyptus trees and other “invasive” species.

This will make room for local tree species to grow and, they hope, help protect the village from wildfires, a growing concern here.

Despite being the wettest region in Spain, Galicia has turned into a wildfire hotspot in recent years; nearly 40 percent of fires in the country between 2001 and 2015 broke out here.

Experts have pointed to the increased presence of eucalyptus in the region as one of the causes.

Originally from Australia, eucalyptus trees, which are highly inflammable, have been rapidly expanding across Galicia.

In Froxan, in 2016, a large wildfire spread through the eucalyptus canopies on the land that surrounds the village.

According to Evans, the only reason the fire did not destroy their houses was that a forest patch of oaks acted as a firewall, containing the flames. After this, they decided they needed to do something to protect their village.

In 2017, the community joined forces with a local NGO and put out a call for volunteers, asking for help to remove eucalyptus from their land.

About 20 people showed up.

Since then, more than 1,000 people have participated in so-called “de-eucalyptiser brigades” across Galicia, on public and private land.

On this August day, the volunteers are a diverse group – young and old couples, students, middle-aged adults, and retirees. Many bring children and pets along. Most know each other from previous events, but there are also newcomers.

Manuel, an environmental activist, is a regular – this is his sixth trip.

He says that every time he goes hiking with his wife, they end up clearing eucalyptus from small patches of land on their trails.

“We even made up a term for this. We call it ‘forestal gardening’,” he joked.

Until the second half of the 20th century, eucalyptus trees were rare in the Galician landscape. But in the late 1950s, the central government started promoting the plantation of fast-growing tree species in the region, with the opening of a state-run pulp-processing plant.

This happened at a time of urban migration, when many fled rural areas for cities in search of better living conditions.

Planting eucalyptus was convenient; plantations need little care and trees can be sold after 12 to 15 years of growth.

Over the years, seeds began to expand naturally into nearby plots and forests, displacing local tree species in the wild.

Today, eucalyptus are the most abundant trees in Galicia.

This pervasive presence has ripple effects on the region’s biodiversity. Having evolved in a completely different environment, eucalyptuses have few natural interactions with local animal species, said Adolfo Cordero Rivera, an ecologist at the University of Vigo.

“Their leaves are not eaten by deers, cows or other local herbivores. The only animals that eat them are the eucalyptus weevils, another Australian invasive species,” Cordero-Rivera said.

This severely limits the biodiversity that eucalyptuses plantations can support – which is the reason why they are often called “green deserts”.

A 2019 study found that birds among eucalyptus plantations in Galicia, compared with native forests, are lower in number and diversity.

Looking ahead, the landscape is unlikely to change in the short term.

Earlier this year, the Galician government approved a new forest plan for the region to set the land-use guidelines for the next 20 years.

The plan aims to reduce the area planted with eucalyptus by 5 percent by 2040.

But as for their role in wildfires, the situation is complex.

Researchers agree that eucalyptus trees burn easily and can resprout efficiently after a wildfire. But they also note other key risk factors.

“Forest fires [in Galicia] are not only related to the presence of eucalyptus. They are also influenced by climate change, population dynamics and a model of forest governance that is really inefficient in regulating land use,” said Helena Martinez-Cabrera, a researcher at the University of Santiago de Compostela who studies the intersection between eucalyptus plantations and living conditions in rural Galician areas.

The lack of support for people in rural areas makes the region more vulnerable to wildfires and the expansion of eucalyptuses and abandonment of traditional land uses, such as agriculture and farming, are consequences of this, she explained.

“In fact, if you look at the fires in Galicia, you’ll see that the areas that burn the most are not those with the most eucalyptus trees, but those most affected by demographic abandonment.”