On Sunday, the Taliban swept to power in Afghanistan after a few weeks of stunning military victories.

The armed group had been toppled in a US-led invasion in 2001 following the September 11 attacks on US soil, but it gradually regained strength, carrying out numerous attacks on foreign as well as Afghan forces in the past 20 years.

The Taliban, which means “students” in the Pashto language, is trying to project a more moderate image this time around, but observers in Afghanistan and internationally remain sceptical. On Tuesday, spokesman Zabihullah Mujahid promised to protect women’s rights and press freedom in the first news conference since the takeover.

Many leaders of the Taliban prior to the formation of the armed group in early 1990s, fought alongside the Afghan Mujahideen against the Soviet occupation in the 1980s.

The Mujahideen received weapons and money from the US as part of its policy against its Cold War foe.

At the time, the Soviets were backing the communist leaders who had staged a bloody coup against the nation’s first president, Mohammad Daoud Khan, in 1978.

After the Soviets pulled out in 1989, chaos reigned and, by 1992, there was a full-blown civil war with Mujahideen commanders fighting for power and dividing the capital city of Kabul, which was showered daily with hundreds of rockets from all directions.

The Taliban armed group emerged as a substantial player in early 1990s. Many of its members had studied in conservative religious schools in Afghanistan and across the border in Pakistan.

They made quick military gains, winning control of Kandahar, the biggest city after Kabul, and promising to make the cities safe. After years of war, people generally welcomed them, fed up with the Mujahideen commanders and their forces who were accused of rights abuses and war crimes in their struggle for power.

By 1996, the Taliban seized the capital and hanged the nation’s last communist president, Najibullah Ahmadzai, in a public square. It declared Afghanistan an Islamic emirate and started imposing its ultra-strict interpretation of Islamic law.

It was recognised by only three countries – Saudi Arabia, the United Arab Emirates (UAE) and Pakistan.

The group managed to bring a semblance of normalcy and decided to tackle endemic corruption, winning some initial popularity. 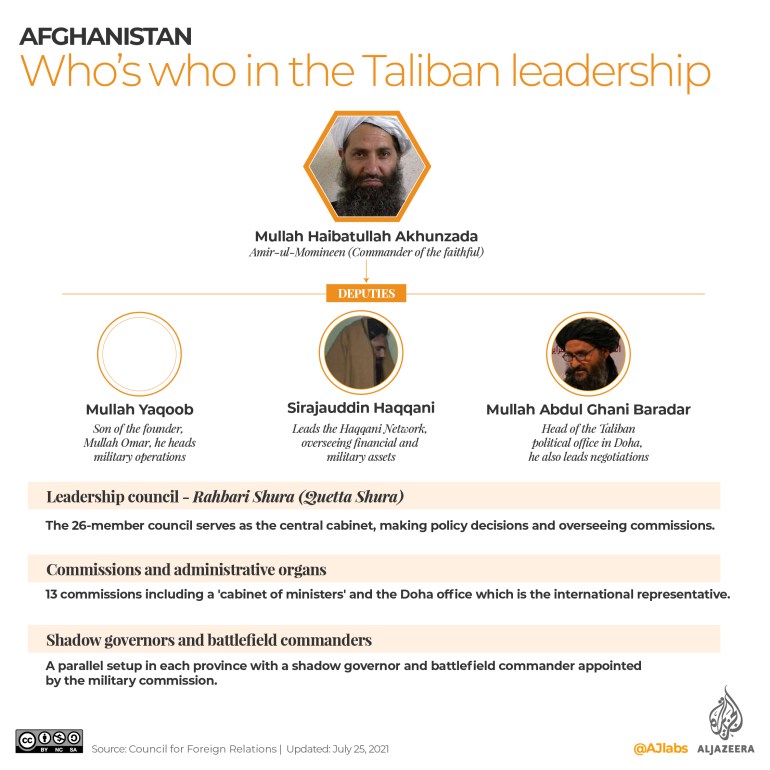 But the Taliban never eased the restrictions it initially imposed to, it said, ensure that the civil war’s crimes could not be repeated.

The restrictions included banning women from education and employment, except for female doctors. Anyone who did not obey could be jailed or beaten publicly.

Its six-year rule was marked by abuse of ethnic and religious minorities and curbs on seemingly innocuous activities and pastimes such as music and television.

Even sports were highly regulated, as male athletes were told what to wear and matches were paused during the five daily prayers.

In 1999, the United Nations imposed sanctions on the Taliban over its links to al-Qaeda, which was blamed for the 9/11 attacks in the US.

In March 2001, the Taliban decided to destroy the historic Buddha statues in Bamiyan province, an act that drew global condemnation.

The US invaded Afghanistan on October 7, 2001, after the Taliban refused to hand over al-Qaeda’s leader, Osama bin Laden, who was hiding in Afghanistan after being initially invited back to the country by former Mujahideen commander Abdul Rab Rassool Sayyaf. Bin Laden was considered the mastermind behind the deadliest attacks on US soil.

In the lead-up to the US invasion, the group had asked the US President George W Bush administration to provide proof of bin Laden’s role in the 9/11 attacks and later for negotiations with Washington. Bush rejected both.

The Taliban was toppled within a couple of months of the start of a bombing campaign by the US and its allies, a new interim government headed by Hamid Karzai was formed in December 2001.

Three years later, a new constitution was declared; it took its cues from the reformed constitution of the 1960s in which women and ethnic minorities were formally granted their rights by the nation’s last king, Mohammad Zahir Shah.

But by 2006, the toppled Taliban had regrouped and was able to mobilise fighters in its battle against foreign occupiers and its allies.

The 20 years of conflict devastated Afghanistan, with more than 40,000 civilians killed in attacks by both the Taliban and the US-led forces. At least 64,000 Afghan military and police and more than 3,500 international soldiers were also killed.

The US has spent almost $1 trillion on the war and reconstruction projects but the country still remains poor and its infrastructure in tatters.

In 2011, the Obama administration allowed a group of Taliban officials to move to Qatar, where they would be charged with laying the groundwork for face-to-face negotiations with the government of then-President Karzai.

In 2013, the Taliban’s Doha office was formally opened. In 2018, the Trump administration began formal, direct talks with the group. The Afghan government was not invited.

The head of the Taliban political office in Doha, Abdul Ghani Baradar, signed an agreement with the US on February 29, 2020, that paved way for the withdrawal of the US and other foreign forces. The Taliban promised not to attack US-led foreign forces.

The agreement also launched peace talks between the Taliban and the Afghan leadership in the Qatari capital. But the Taliban continued its military offensive on the ground while participating in the talks. Last Sunday, they entered the presidential palace, retaking Afghanistan 20 years after they were driven out of power.