The Taliban armed group is eying power after it entered the capital Kabul, capturing 26 out of the country’s 34 provincial capitals in the past 10 days.

The armed group, which was toppled from power in a United States-led invasion in 2001, stepped up its campaign to defeat the Western-backed government in May as foreign forces started to withdraw from the country.

Here is an animated map showing how and when the Taliban captured 26 out of the country’s 34 provincial capitals:

Below is a more detailed breakdown of how each of the provincial capitals fell to the Taliban.

On Sunday, the Taliban captured at least seven capital cities, including Jalalabad, the capital of Nangarhar province before surrounding the capital city of Kabul. 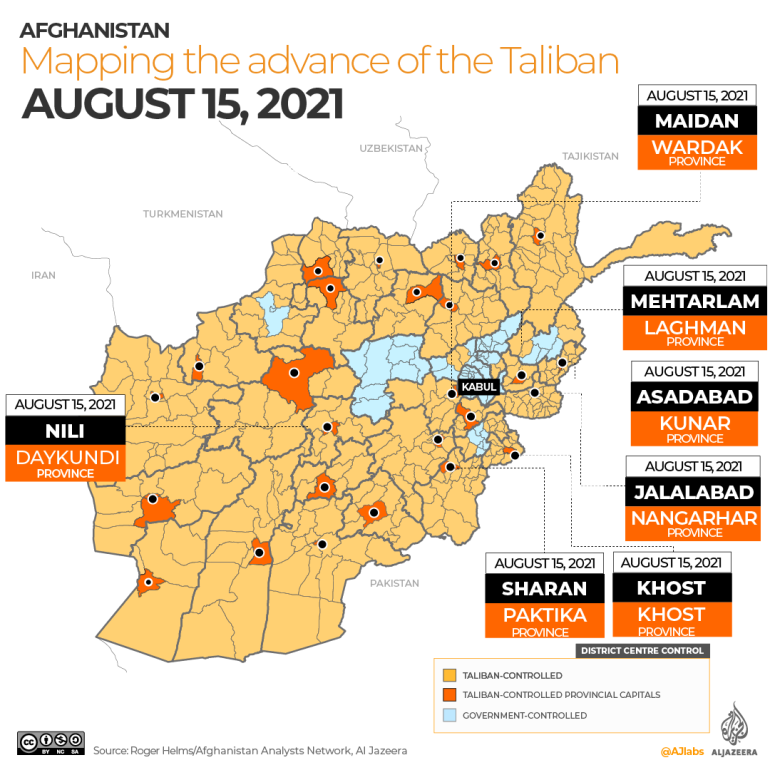 Taliban fighters captured Mazar-i-Sharif – the country’s fourth-largest city with a strong defence, as it took control of the entire north of the country. 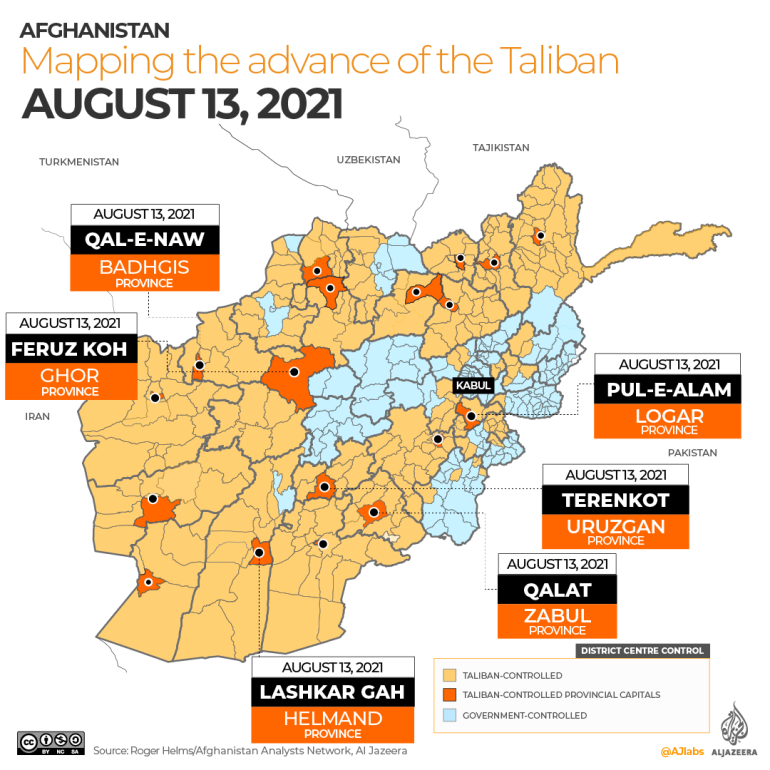 The capital of Helmand province in the south was among six successive capital cities captured by the Taliban over the course of Friday. Military and government officials had evacuated the city after striking a deal with the group, the security source said.

The Taliban also captured Qal-e-Naw, capital of the western Badghis province, Al Jazeera’s Ali M Latifi reported. “Earlier in the summer, the group briefly took control of the capital before the government recaptured it within a matter of hours,” he said.

The Taliban seized the capital of the central province of Logar and captured the governor and the head of the city’s spy agency.

The capital of the southern Uruzgan province is captured and the governor escapes to Kabul.

The capital of Zabul province in Afghanistan’s south became the 18th city to fall to the Taliban over the course of a week.

The capital of the southeastern province of Ghazni, about 130km (80 miles) southwest of the national capital, Kabul, fell on Thursday after heavy clashes.

The capital of Herat province in the west of the country, the third-largest city, fell to the Taliban after two weeks of fighting.

The Taliban claimed to have taken Kandahar, Afghanistan’s second-biggest city and former Taliban stronghold, in what was a big blow to Afghan government forces.

The Taliban took control of another city in northern Afghanistan, an official said, making it the ninth provincial capital to fall to the group in six days. Badakhshan borders Tajikistan, Pakistan and China. 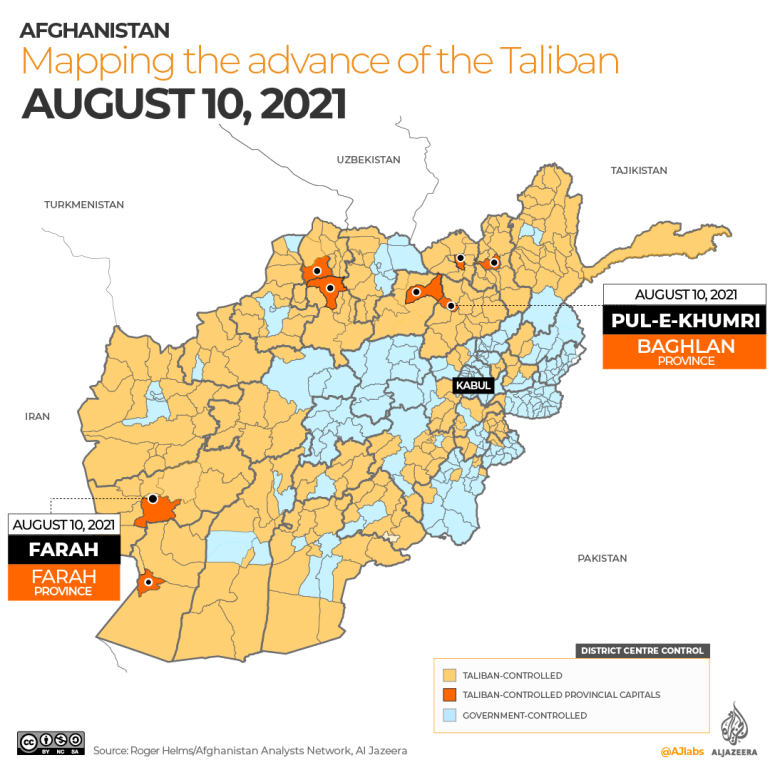 Local sources confirmed the fall of the capital of the southwestern province to the Taliban after briefly fighting with security forces. The Taliban captured the province’s central prison, according to parliamentarian Abdul Nasri Farahi. The capture of Farah also provided another border crossing into Iran for the group.

The capital of the northern province of Samangan was the sixth Afghan provincial capital to fall in four days. Samangan was once known to be one of the safest provinces in Afghanistan, with a minimal Taliban presence.

The Taliban took control of the Sar-e-Pul capital in the north. It was the first of the three provincial centres that fell within hours of one another. According to Mohammad Noor Rahmani, a provincial council member of Sar-e-Pul province, the group had taken government buildings in the capital, driving officials out of the city to a nearby military base.

Taliban fighters seized control of the northern city of 270,000 people, Afghanistan’s fifth-largest city. Regarded as a strategic prize, Kunduz lies at the gateway to mineral-rich northern provinces and Central Asia.

The capital of Takhar province, also in the north, fell to the Taliban in the evening. They freed prisoners and forced government officials to flee.

The Taliban declared that it had captured the entire northern province of Jawzjan, including its capital Sheberghan. Heavy fighting was reported in the city, and government buildings were taken over by the Taliban. The city is home to notorious strongman Abdul Rashid Dostum, who had recently returned to Afghanistan after receiving medical treatment in Turkey. 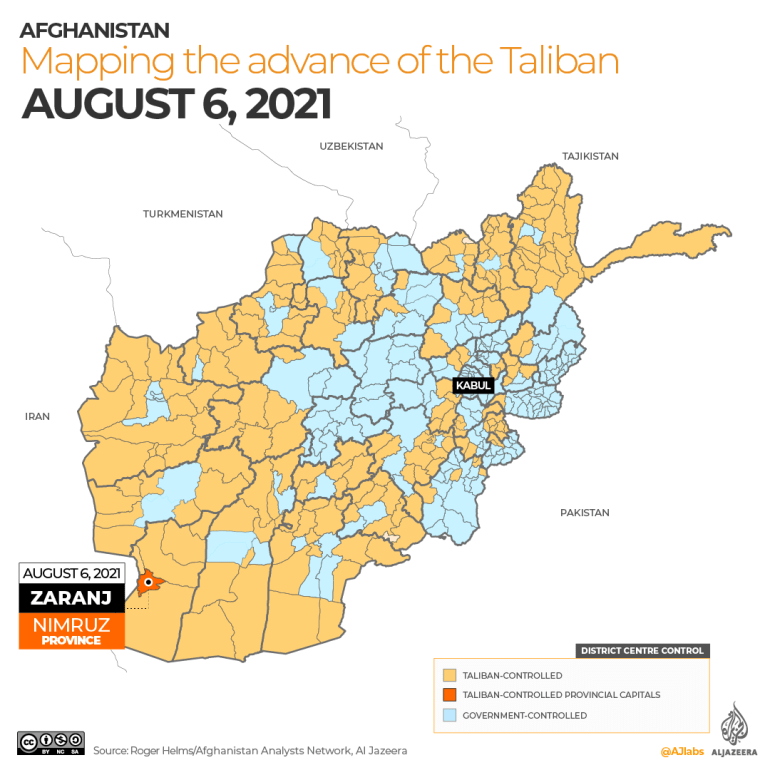 The city of Zaranj was the first provincial capital to fall to the Taliban since it stepped up attacks on Afghan forces in early May. Nimruz province shares a border with Iran and Pakistan, and Zaranj is considered among the war-scarred country’s famed historical cities.