The order comes as locally transmitted infections jumped by 466 over the previous 24 hours in the country’s most populous state.

“To minimise movement and protect our communities from the evolving COVID situation in Sydney, stay-at-home orders will be introduced for all of Regional NSW from 5pm tonight,” the state’s Deputy Premier John Barilaro wrote on social media.

The lockdown began at 5pm (07:00 GMT) and will last for at least seven days, according to the Sydney Morning Herald newspaper.

NSW will increase fines to people breaching lockdown rules in the state, where police will fine people up to A$5,000 ($3,700) “on the spot” for breaching stay-at-home orders or for lying to contract-tracing officials, said state Premier Gladys Berejiklian.

As the situation escalates, it is becoming increasingly unlikely Australia’s largest city Sydney will end its nine-week lockdown on August 28 as originally planned. Authorities had been talking about easing some restrictions if enough people are vaccinated and case numbers fall.

“I wish things were getting better, but this is the nature of the Delta variant,” Berejiklian told a news conference. “We will get through this but September and October are going to be very difficult.”

Hundreds more military personnel will be deployed next week to Sydney to help enforce the city’s lockdown as the outbreak spreads beyond Australia’s largest city.

Several towns in the state are also in lockdown because of people breaching the Sydney lockdown and spreading the virus.

A new A$3,000 ($2,200) fine will also apply to people entering regional areas of the state without an official permit. The permit will only be granted for certain reasons including authorised work, property inspections or urgent work repairs on a second home.

“The fines are some of the biggest fines that I’ve ever seen and we will be issuing them as of today,” said New South Wales police commissioner Mick Fuller. “Those people that have been getting around the orders, taking family vacations to other premises – that is over.”

All of NSW going into lockdown from 5PM after 466 new cases, four deaths in NSW: https://t.co/bzMxoIse3f

Fuller said he asked for the increased powers after seeing high levels of movement and having “difficulties getting compliance from some members of the community”.

Some breaches of public health orders in the state previously carried a A$1,000 ($737) fine.

The new cases eclipse the previous daily high of 390 set on Friday, with daily infections topping 300 for the past five days. Four deaths were recorded on Saturday, taking the state’s total in the latest outbreak to 42.

“This is literally a war and we’ve known we’ve been in a war for some time, but never to this extent,” Berejiklian said.

In neighbouring Victoria, where state capital Melbourne is in its second week of an extended lockdown, authorities reported 21 locally acquired cases, up from 15 a day earlier.

Despite the recent outbreaks, Australia still has much lower COVID-19 numbers than many other countries in the developed world, with more than 38,600 cases and 952 deaths. 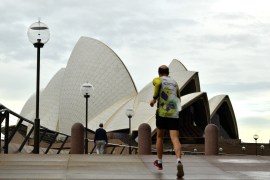 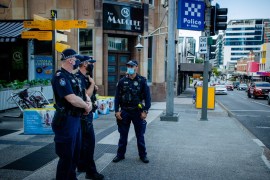 Millions in and around the city will be placed under stay-at-home orders from Saturday afternoon for three days. 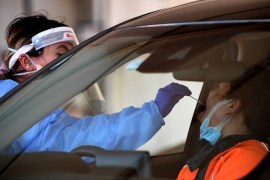 Australia’s COVID cases at record high with millions in lockdown

Country struggles to contain spread of the virus as 60 percent of the population is placed under lockdown.