Kabul, Afghanistan – Samia gathered her seven children, packed a few clothes and left her home in Takhar for the Afghan capital, Kabul, in the middle of the night.

All day on Saturday, her family had been hearing that the Taliban were about to take the neighbouring province of Kunduz and would soon begin their march towards Taluqan, the capital of Takhar.

By Sunday evening, the Taliban had hung their black-on-white flag in both capitals, but by then Samia was already on the road to Kabul.

She left with her four boys and three girls on Saturday evening and would not reach Kabul until well after midnight on Monday.

Ordinarily, the trip would not take more than seven or eight hours, but Samia said they had to stop along the way.

“We had to change cars three times, and each time it was more difficult to find a car willing to take us,” she said, sitting under a tree in a makeshift IDP camp in the north of Kabul.

The Taliban has been in control of the road from Kabul to Kunduz for several months. With the takeover of Takhar, the group’s control over the highway now stretches further east to the edge of the province.

‘A rocket hit our house’

The Taliban’s days-long press to take over northern provinces did not affect just the length of the trip, the cost also shot up.

These prices mean that the approximately 200 families that made it to Kabul were fortunate and had the financial means to take the risk and get on the road to the capital.

Like most of the families at the camp, Samia came alone with her children, leaving her husband behind to look after their property.

She is aware that the Taliban is known to use civilian homes to fire on government targets and that the US and Afghan air forces have increased their air attacks targeting the group.

“Your life is precious, but if you don’t have a home or your belongings, then you come back to nothing,” she said, sitting on a dusty carpet surrounded by dozens of other women and children.

However, on Tuesday morning, Samia received word that there will be little for her family to return to if they ever make it back to Takhar.

“I called my husband, he had fled the fighting and a rocket hit our house,” she said, adding that he would try to join the family in Kabul on Thursday. 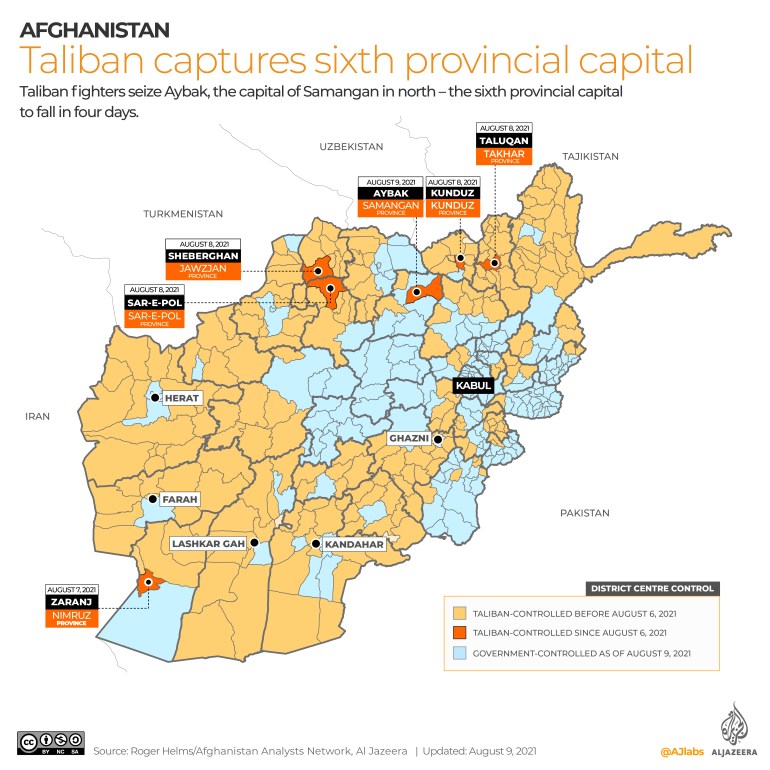 Samia says many women and children were forced to escape the escalating fighting between the Taliban and government forces.

“Both sides just fire away without looking at what they’re hitting. You could be struck by the bullet from either side.”

Still, Samia reserves most of her anger for the Taliban.

“Takhar used to be safe, we had no worries. We had to leave because they brought the fighting to our communities,” she said.

Not far from Samia sits Zarmina, a student of agriculture from Kunduz.

Hearing Samia’s story, Zarmina begins to cry, saying she was only two months away from completing her studies at Kunduz University.

Like Samia, Zarmina’s family had to leave in groups, but her family was in particular danger because her father served in the Afghan military.

Zarmina described her fear when her father was forced to take a Taliban-controlled road from Kunduz to Kabul on Saturday evening to flee the fighting, despite the danger of the group stopping his vehicle to interrogate passengers to find people who worked for the government or foreign forces.

Zarmina says when her father and brother left Kunduz, she begged them to take her but was told there was no room and that they would come back for the rest of the family.

However, within two hours, the remaining women and children saw that it was too unsafe and got in another vehicle that night.

“We were so scared for my father and brother, but they were so fortunate. They were not stopped even once along the way,” she said, adding that their car was stopped several times along the way.

‘Our beautiful home is gone’

Samia and Zarmina consider themselves lucky to have been able to find cars to bring them to Kabul.

Ghulam Farooq, who fled Kunduz with his brother and nephew, was not as lucky.

He had packed them into his tiny Indian-made motorised rickshaw, a popular mode of transportation in cities outside Kabul, and headed along the treacherous Salang Pass to the capital.

“We had no choice, so I just threw them into the rickshaw and floored it.”

Travelling in a small, badly insulated vehicle left them susceptible to the frigid northern air.

Farooq also had to traverse through the cars and buses full of other refugees in his tiny rickshaw.

Though they passed through several Taliban checkpoints, their biggest worry was gas.

Halfway through the Salang Pass, the rickshaw ran out of fuel. Farooq had to wait on the side of the road as vehicles zoomed by and the Taliban patrolled the areas.

Finally, he found a young driver willing to give him a few litres of gas for 70 Afghanis (less than $1).

“If he hadn’t given me that much, I don’t know how we would have made it here,” he said, sitting in his rickshaw parked in Kabul’s famous Shahr-e-Naw Park.

Though the families gathered in this dirt-covered park are fortunate to get Kabul, it only takes care of half of their problems.

Tamana Ayazi, a filmmaker and journalist originally from Balkh province, said that once families make it to the capital, they have to deal with a whole host of other issues.

Ayazi’s family has been hosting nearly a dozen families from Balkh over the last week.

“My family is fortunate, my father had the forethought to build a big house in Kabul and now I know why,” she said after visiting the IDPs in Kabul.

This is not the first time Ayazi’s family has had to host relatives fleeing an “encroaching” Taliban.

When the armed group first took Kunduz in 2015, Ayazi says they had to house her sister’s family. That was when she saw the longer-lasting impacts of war and displacement.

“Imagine you’re a child, or even an adult, and you have to hear the sounds of the rockets and bullets, it takes a toll on your mental wellbeing,” the 27-year-old said.

She points to her niece, whom they had nicknamed Khoshi, happiness, for her once-cheerful disposition, as an example.

Ayazi says when she visited her niece in Kunduz and Mazar-i-Sharif for the first three years of her life, she was always smiling.

But all that changed in 2015 when Khoshi arrived with her family in Kabul from Kunduz. “She became quiet and sullen. We never saw her smile again,” Ayazi says.

Those who recently fled the fighting agree, saying the scars will last for a lifetime.

Reflecting on his native Kunduz province, Ghulam Farooq, the rickshaw driver, says: “Our beautiful home is gone. It is covered in flames now.”