Lithuania will build a barrier on its border with Belarus to deter migrants and refugees amid an influx of arrivals from its neighbour, Prime Minister Ingrida Simonyte said on Wednesday, escalating a row with Minsk.

The move came amid growing accusations that Belarus has allowed crossings into Lithuania in retaliation to European Union sanctions over its heavily criticised diversion of a passenger plane in May – and subsequent arrest of a dissident journalist on board.

Lithuania is a member of the 27-member bloc and home to several Belarusian opposition figures in self-imposed exile.

“We will begin building an additional physical barrier, which divides Lithuania and Belarus, which would be a certain sign and a certain deterrent to organisers of the illegal migration flows,” Simonyte told a news conference, adding that the barrier would be patrolled by the army.

Since the beginning of June, there have been more than 1,000 detected irregular crossings along the 680km (420-mile) border shared by Lithuania and Belarus, according to Simonyte.

Simonyte said Belarus had been offering flights to Minsk to migrants and refugees, citing evidence found on at least one person who had reached Lithuania.

“There are travel agencies, direct flights that connect Minsk with Baghdad for example, and there are agencies both in Belarus and other countries that operate and attract ‘tourists’ to Minsk,” Simonyte told Reuters.

More and urgent actions are needed ahead. https://t.co/afthiDi38t

Last week, Lithuania declared a state of emergency due to the influx.

Authorities have set up tent camps to accommodate the growing number of arrivals, most of whom are from Iraq, Syria, Afghanistan and Cameroon. The Baltic country is also sending delegations to Turkey and Iraq later this month to discuss the matter with local governments.

Lithuania, which is strongly opposed to Belarus’s longtime President Alexander Lukashenko, has said it suspects his government is allowing migrants and refugees through the border.

Lukashenko has previously announced his country will no longer try to stem a flow of illegal migrants and refugees from other countries to the EU, following a downturn in relations between his government and the bloc prompted by the forced landing of the Ryanair plane in Minsk.

On Tuesday, he reiterated his warning.

“If some think that we will close our borders with Poland, Lithuania, Latvia and Ukraine and become a camp for people fleeing Afghanistan, Iran, Iraq, Syria, Libya and Tunisia, they are mistaken,” Lukashenko said on Tuesday during a government meeting.

“We won’t hold anyone, they are coming not to us but to the enlightened, warm and cozy Europe,” he added mockingly.

The EU has dispatched guards from its border agency, Frontex, to Lithuania’s border in a bid to deal with the burgeoning migrant crisis.

During a visit to Lithuania’s border village of Medininkai on Tuesday, European Council President Charles Michel pledged that “we will do our utmost to provide more support so that the Lithuanian authorities can overcome these difficulties and find solutions”.

Simonyte, accompanying Michel, accused Belarusian authorities of encouraging the flow of migrants as a “hybrid attack”.

“We are guarding not only Lithuania’s, but also the EU’s external border,” she said.

The EU has imposed far-reaching economic sanctions on Belarus over the passenger plane incident and its response to mass anti-government demonstrations last year that were fuelled by Lukashenko’s re-election to a sixth term in a disputed August 2020 election.

Belarusian authorities responded to the demonstrations with a sweeping crackdown that saw thousands of people arrested and reports of police brutality. Most of Lukashenko’s opponents are now either in jail or have fled the country.

A record number of migrants and refugees are entering Lithuania from Belarus as tensions between Brussels, Minsk simmer. 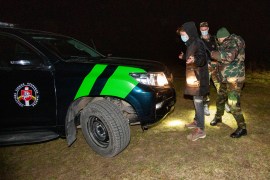 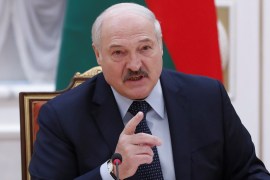 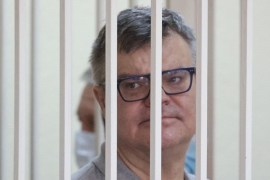