Asuncion, Paraguay – Marta Díaz sits among a settlement of improvised tents made from plastic sheeting in a central square of Paraguay’s capital Asunción, just meters from the National Congress building. A brightly-coloured painted scene hangs nearby depicting rural, wooden houses set on fire as a group of unbelieving people look on, reflecting what happed to her community.

“We aren’t happy here. We came because of the pressure from bad people that threw us off our land, that burned it. We aren’t free,” she told Al Jazeera.

Díaz is the leader of Ka’a Poty 1, a community of the Ava Guaraní people – one of 19 Indigenous nations in Paraguay – who were forcibly evicted from their land in the Itakyry district in the east of the country on June 15 by a combination of armed riot police and private guards.

Since June 16, the 60 adults and 44 children have been camping in the harsh winter conditions of the city square, demanding justice and restitution of their land.

Ka’a Poty 1 are one of at least seven Indigenous communities to suffer violent evictions by state forces and armed civilians due to land ownership disputes in the past three months – prompting a large public outcry and condemnation from human rights organizations such as Survival International.

Díaz said that the eviction saw all the community’s houses, their temple, and school burned to the ground. Practically all their possessions were stolen, their crops were destroyed, and their pets were killed before their eyes. A pregnant woman miscarried, and a 15-day-old baby was hospitalized.

“We lost everything. They didn’t even let us take the clothes from our homes”, she said.

Indigenous people form one of the most marginalized and vulnerable sectors in Paraguay, with more than 30 percent facing extreme poverty, according to 2017 official figures – far above the national average.

Milena Pereira, a lawyer assisting the community as part of a collective of Paraguayan human rights activists, the Social Platform of Human Rights, Memory and Democracy, told Al Jazeera that, alongside extreme violations of human rights during the eviction, the circumstances that led to the court order for the operation were entirely illegal, violating the constitution and international treaties guaranteeing rights of Indigenous peoples to their territories.

She said the main cause of these evictions is the existence of illegitimate deeds on communities’ land. In the case of Ka’a Poty 1’s 1364-hectare (3370-acre) territory, 12 deeds held by private individuals overlap with that of the community, which was registered by the state’s Paraguayan Indigenous Institute (INDI) in 1996.

Many illegitimate land documents in Paraguay can be traced to the 35-year right-wing dictatorship of General Alfredo Stroessner (1954-89). The period saw 6,744,005 hectares (16,664,799 acres) of public lands, including areas corresponding to ancestral Indigenous territories, gifted to allies of the regime through an agrarian reform nominally intended for campesinos (small-scale farmers), according to Paraguay’s 2008 Truth and Justice Commission report.

The father of current president Mario Abdo Benítez and Nicaraguan dictator Anastasio Somoza were among beneficiaries.

Paraguay has one of the highest inequalities of land ownership in the world, according to the World Bank, as booming GMO soy and ranching sectors, which cover enormous tracts of the country, make land Paraguay’s most valuable and coveted commodity.

The state has never taken any steps to recover the “ill-gotten land”, as it is known, or to prosecute involved parties. Moreover, unchecked corruption has allowed usurpation to continue since the establishment of democracy.

“There’s evidently a fraudulent scheme with public notaries, civil servants and registry employees partaking,” said Pereira. “There is no line of investigation by the authorities to punish those involved and stop it from continuing.”

“There’s a failure in the judiciary. The Constitution isn’t respected, the laws aren’t respected. The UN has even said that there can’t be evictions because of the pandemic, but nobody cares about that,” Rodríguez said.

A 2020 Freedom House report concluded that due process in the Paraguayan justice system is limited by corruption and that “individuals with influence or access to money are frequently able to obtain favourable treatment.”

Pereira is convinced that this dynamic led to Ka’a Poty’s dire situation.

“Ka’a Poty is the clearest example of the repercussions of this situation of illegitimate deeds and a lack of basic mechanisms for governance of land ownership in the country,” said Pereira.

Interior Minister Arnaldo Giuzzio in an interview with Radio Nanduti defended the actions of police, saying that forces were only complying with court orders during evictions. He said that vulnerable Indigenous groups were brought to the capital by political actors who manipulated them for their own ends.

“It’s necessary to look at the causes that are creating these kinds of conflicts,” he said. “We have to modernize our legislation because the majority of Indigenous people now want to have a home.”

Eusebio Villanueva, member of the Guana people and Copresident of the Youth Network of Legal Promotors of Indigenous Peoples, said that the money of farmers in the powerful GMO soy sector – who have been involved in a vast number of recent land conflicts and evictions of Indigenous and campesino communities – is “worth far more than the documents of the INDI”.

He emphasized that land problems were far from new for Indigenous communities. A 2015 UN report found that more than half of Paraguay’s almost 500 communities were either landless or facing ownership conflicts. 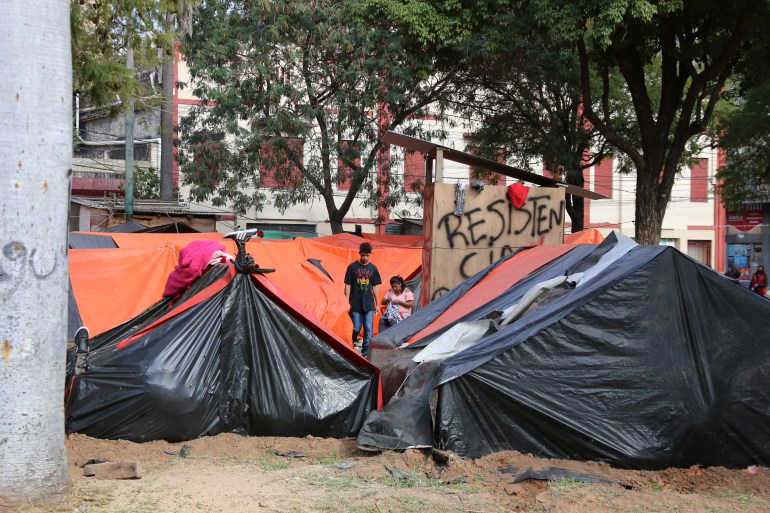 Additionally, a 2020 Earthsight report showed that enormous land infringements from ranchers were taking place in the protected territory of the Ayoreo Totobiegosode, the only Indigenous group in voluntary isolation outside the Amazon.

“The state really doesn’t guarantee access to health or education,” he said. “There are communities without electricity, drinking water, let alone a nearby health centre.”

Lack of state support has also put many Indigenous languages and cultural practices greatly at risk.

An injunction that will allow the community to return to their land was granted by a judge on July 30, following street protests by the Indigenous families to demand action from judicial authorities.

The community and its supporters celebrated the news even though no date had been set for the return to their lands 350 kilometres (217 miles) away.

Marta Díaz worries that conditions there may be more difficult than ever. While they receive support from urban organizations and individuals in Asunción, this may not reach their rural territory.

“There is only the red earth waiting for us without trees: everything was burned, everything was destroyed,” she said. “Our community had crops: banana, sugarcane, cassava, sweet potato, pineapple. It’s all been destroyed so they can plant soy. We’re going to rebuild our community – we have hope”.

With this context in mind, Pereira is part of a group pressuring legislators to pass a law to guarantee compensation for communities unlawfully expelled from their land and, importantly, ban forced evictions in Paraguay.

In the cold of the square, Elisa González, Ka’a Poty 1’s schoolteacher, said she will continue to fight for a brighter future, one she says that many of Paraguay’s Indigenous communities have been denied for generations.

“We don’t like it here; we want to return to our land,” she said, watching the barefoot children playing marbles on the ground. “I want them to be able to study too – so they can be teachers, doctors… lawyers.”