The first flight evacuating Afghan interpreters and others who worked alongside the United States forces in Afghanistan has landed at Washington Dulles International Airport, the US government has announced.

An airliner carrying 221 Afghans, including 57 children and 15 babies, according to the internal document obtained by The Associated Press, touched down at the airport early on Friday morning.

The White House confirmed that the Afghans were the first of about 2,500 Afghans – composed of 700 “principal” applicants and their families – to be evacuated to the US in the first group of relocations. That group has already been approved for the special immigrant visas and cleared background checks, according to the White House.

Many Afghans who worked with the US-led NATO forces fear reprisals from the Taliban with US troops scheduled to depart by the end of August, nearly 20 years after they first arrived.

In a statement on Friday, Biden called the flight “an important milestone as we continue to fulfill our promise to the thousands of Afghan nationals who served shoulder-to-shoulder with American troops and diplomats over the last 20 years in Afghanistan.”

“These first Afghans are able to come directly to the United States because they have already completed extensive background checks and security screening by the Intelligence Community and the Departments of State and Homeland Security,” he said.

“They will complete the final steps of their visa applications and required medical checks at Fort Lee, in Virginia, before traveling onward to begin their new lives in the United States.”

The US is partnering with the United Nations International Organization for Migration to relocate the families across the country.

Reporting from Afghan capital Kabul, Al Jazeera’s Charlotte Bellis said the US Embassy in the city has been “very secretive” about the evacuation logisitics.

“They have told us that they are incredibly worried about the security and privacy of these interpreters,” she said.

“They are worried that if any logistics get out now about who these people are and how they are getting out, it will put in jeopardy the future of the evacuees and put them in harm’s way.”

In what the White House has dubbed Operation Allies Refuge, most of the Afghan interpreters and workers as well as their families are likely to be taken first to US overseas military bases before they are resettled in the country or elsewhere.

About 20,000 Afghans who worked as interpreters for the Americans have applied for evacuation under the US State Department programme of Special Immigrant Visas (SIVs).

Some estimates suggest the total number of prospective evacuees could be as high as 100,000 once family members are counted. 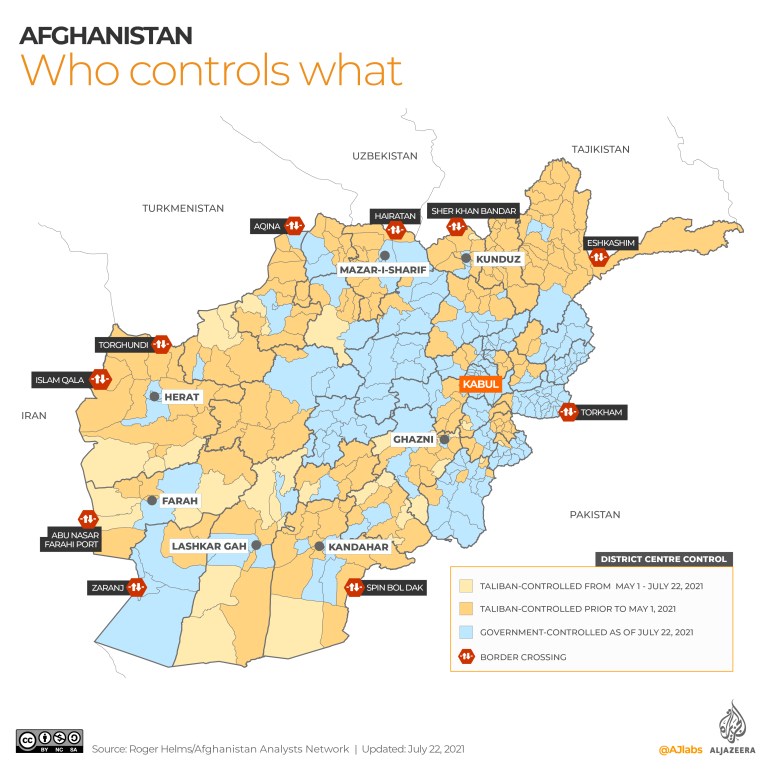 Meanwhile, the Taliban have stepped up a sweeping offensive across Afghanistan in recent months, capitalising on the last stages of the US troop withdrawal. Their offensive has raised fears of a potential humanitarian crisis.

The Taliban have publicly stated that interpreters who worked with foreign forces have nothing to fear as the US and its allies complete their withdrawal.

But many question the Taliban’s sincerity.

At the news conference on Thursday, US Secretary of State Antony Blinken also confirmed that the subject of relocating Afghans came up during his meetings in Kuwait.

Washington is still seeking third countries to host some of those evacuated while their cases, including detailed security checks, are finalised.

There had been speculation that some could be housed at US facilities in Kuwait but there was no such announcement during Blinken’s lightning trip to the Gulf state.

Also on Thursday, the US Congress approved a $2.1bn emergency funding bill, part of which would go towards the Afghan evacuation.

US Senate Appropriations Committee Chairman Patrick Leahy said part of the money will pay for expanding the number of special US visas for translators and other Afghans and to provide humanitarian aid for an anticipated rush of migrants seeking refuge outside of Afghanistan.

The funding includes “humanitarian aid for the inevitable flood of Afghans fleeing to neighbouring countries. The United Nations has estimated that could swell to 500,000 refugees in just the next few months,” Leahy said.

The bill also includes the expansion of the visa programme for the Afghans to include at least 8,000 more individuals.

‘Take matters into their own hands’

Still, uncertainty persists even for Afghans who have already been approved for the special US immigrant visa face uncertainty and continued concerns over their safety, Al Jazeera’s Bellis reported.

“We’ve talked to a couple of them and there’s still a lot of confusion, some of them say ‘we’ve waited three years and I still don’t know if I’m going to be on these flights’,” she said. “Apparently I’m in progress, but there’s no one that I can speak to.”

And while some Afghans have been able to get out of the country through other NATO allies, many who worked for foreign entitites in the country – including media organisation, NGOs and contractors – “are having to take matters into their own hands”, Bellis added, with the UN forecasting “that 1.5 million Afghans are going to flee Afghanistan by the end of the year” if the Taliban continue to make gains.

Canada, for its part, has promised to evacuate Afghans who helped Canadian troops.

Deputy Prime Minister Chrystia Freeland said they should be flown out of Afghanistan and resettled as soon as possible.

“People who have worked for Canada, who therefore absolutely have the right to come to Canada, should be getting on those planes as quickly as possible,” Freeland told a news conference.

“Our desire is to move very, very quickly with this process.”