Pakistan and Saudi Arabia are in “clear alignment” on bilateral issues as well as on regional security, the latter’s foreign minister has said, as he completes a one-day visit to the Pakistani capital.

“We have a very, very aligned view as towards the priority to regional stability, regional security, dialogue and resolving issues through dialogue and we found that security is key.”

Al Saud referred to the conflicts in Afghanistan, Kashmir, the Palestinian Territory and Yemen as places where that alignment exists.

Tuesday’s talks mainly focused, both foreign ministers said, on deciding details of how the Saudi Pakistan Supreme Coordination Council (SPSCC) would function, a body announced in May that is meant to increase economic and other linkages between the two countries.

“Yesterday there was a senior official discussion on that, and we have made good progress on what the structure should, what the organisation should look like and what should be the work plan,” said Pakistani Foreign Minister Qureshi at the press conference.

Qureshi also raised the issue of COVID-19 related travel restrictions imposed by Saudi Arabia on those travelling between the two countries, asking that some restrictions be removed “in view of the improved situation on the ground in Pakistan”, a Pakistani statement said.

Qureshi said there were currently about 400,000 Pakistanis, normally resident and working in Saudi Arabia, who were stranded in Pakistan and unable to go back.

“[They are] facing challenges, travel restrictions and issues of vaccination,” he said.

“[There is also how] the Saudi government can help facilitate students, Pakistani families residing in Saudi Arabia, and their children who have gone beyond school and need admission in universities.”

There are currently an estimated more than two million Pakistanis resident in Saudi Arabia, as per Pakistani government data.

“We talked of course about the valuable contribution that the Pakistani community is making to Saudi Arabia’s economy … and how we can expand the opportunities for Pakistanis in the Kingdom,” said Al Saud.

Al Saud said Saudi authorities were “working to lighten [COVID-19 related] challenges on all of us”.

The two countries pledged to continue “working closely to further strengthen bilateral relations in all spheres, with a particular focus on trade, investments, energy, the environment, and culture”, according to a Pakistani statement. 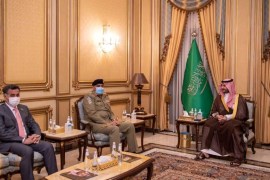 Pakistan’s criticism of Saudi-led Muslim bloc OIC for its inaction on the Kashmir issue has threatened their ties. 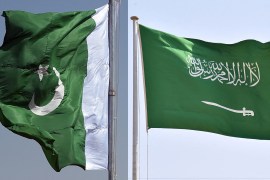 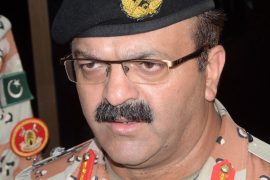