The Taliban says it does not want to monopolise power but insists there will not be peace in Afghanistan until there is a new negotiated government in Kabul and President Ashraf Ghani is removed.

In an interview with The Associated Press news agency, Taliban spokesman, Suhail Shaheen, who is also a member of the group’s negotiating team, laid out the group’s stance on what should come next in a country on the precipice.

The Taliban has swiftly captured territory in recent weeks, seized strategic border crossings and is threatening a number of provincial capitals, as the last United States and NATO soldiers leave Afghanistan.

This week, the top US military officer, General Mark Milley, told a Pentagon news conference that the Taliban has “strategic momentum” and he did not rule out a complete Taliban takeover.

But he said it is not inevitable.

Memories of the Taliban’s last time in power some 20 years ago, when it denied girls an education and barred women from work, have stoked fears of their return among many.

Afghans who can afford it are applying by the thousands for visas to leave Afghanistan, fearing a violent descent into chaos.

The US-NATO withdrawal is more than 95 percent complete and is due to be finished by August 31.

Shaheen said the Taliban will lay down weapons when a negotiated government acceptable to all sides in the conflict is installed in Kabul and Ghani’s government is gone.

“I want to make it clear that we do not believe in the monopoly of power because any governments who (sought) to monopolise power in Afghanistan in the past, were not successful governments,” said Shaheen, apparently including the Taliban’s own five-year rule in that assessment.

“So we do not want to repeat that same formula.”

But he was also uncompromising on the continued rule of Ghani, calling him a warmonger and accusing him of using his Tuesday speech on the Muslim festival of Eid al-Adha to promise an offensive against the Taliban.

After that vote, Ghani and his rival Abdullah Abdullah declared themselves president.

After a compromise deal, Abdullah is now No 2 in the government and heads the reconciliation council.

His critics – including ones outside the Taliban – accuse him of seeking only to keep power, causing splits among government supporters.

It ended with promises of more talks, as well as greater attention to the protection of civilians and infrastructure.

Shaheen called the talks a good beginning. But he said the government’s repeated demands for a ceasefire while Ghani stayed in power were tantamount to demanding a Taliban surrender.

“They don’t want reconciliation but they want surrendering,” he said.

Before any ceasefire, there must be an agreement on a new government “acceptable to us and to other Afghans,” he said.

Then “there will be no war”.

Shaheen said under this new government, women will be allowed to work, go to school, and participate in politics but will have to wear the hijab, or headscarf.

He said women would be required to have a male relative with them to leave their home and that Taliban commanders in newly occupied districts have orders that universities, schools and markets operate as before, including with the participation of women and girls.

However, there have been repeated reports from captured districts of Taliban imposing harsh restrictions on women, even setting fire to schools.

One gruesome video that emerged appeared to show the Taliban killing captured commandos in northern Afghanistan.

Shaheen said some Taliban commanders had ignored the leadership’s orders against repressive and drastic behaviour and that several have been put before a Taliban military tribunal and punished, though he did not provide specifics.

He contended the video was fake, a splicing of separate footage.

Shaheen said there are no plans to make a military push on Kabul and that the Taliban have so far “restrained” themselves from taking provincial capitals.

But he warned they could, given the weapons and equipment they have acquired in newly captured districts.

He contended that the majority of the Taliban’s battlefield successes came through negotiations, not fighting.

“Those districts which have fallen to us and the military forces who have joined us … were through mediation of the people, through talks,” he said.

“They (did not fall) through fighting … it would have been very hard for us to take 194 districts in just eight weeks.” 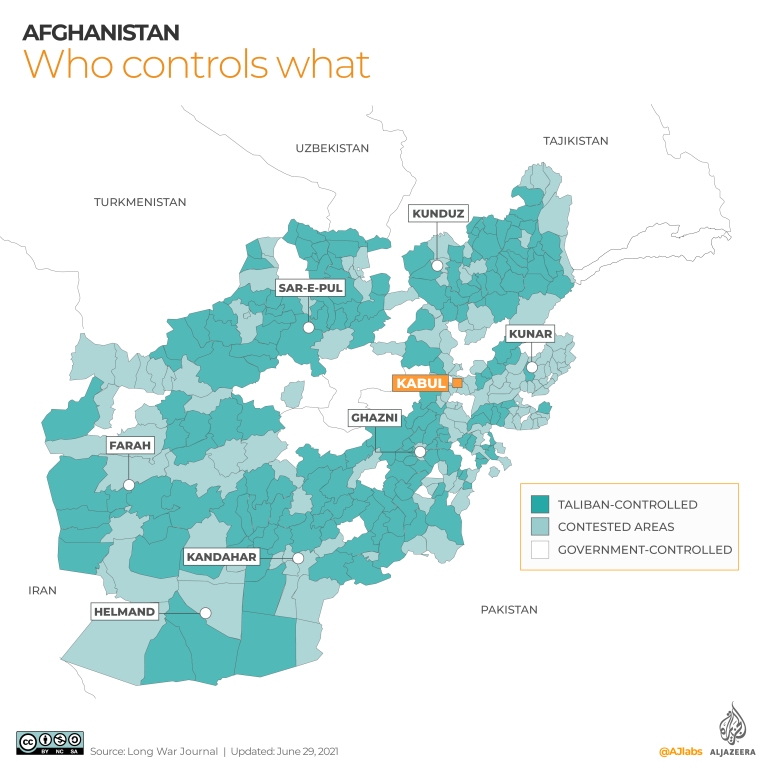 The Taliban controls about half of Afghanistan’s 419 district centres, and while has it yet to capture any of the 34 provincial capitals, it is putting pressure on about half of them, Milley said.

In recent days, the US has carried out air attacks in support of beleaguered Afghan government troops in the southern city of Kandahar, around which the Taliban fighters been amassing, Pentagon press secretary John Kirby said on Thursday.

The rapid fall of districts and the seemingly disheartened response by Afghan government forces have prompted US-allied warlords to resurrect militias with a violent history.

‘No one wants a civil war’

For many Afghans weary of more than 40 years of war, that raises fears of a repeat of the brutal civil war in the early 1990s in which those same warlords battled for power.

“You know, no one wants a civil war, including me,” said Shaheen.

Washington has promised to relocate thousands of US military interpreters.

Shaheen said they had nothing to fear from the Taliban and denied threatening them.

But, he added, if some want to take asylum in the West because Afghanistan’s economy is so poor, “that is up to them”.

He also denied that the Taliban has threatened journalists and Afghanistan’s nascent civil society, which has been hit by dozens of killings over the past year.

Rarely has the government made arrests into the killings or revealed the findings of its investigations.

Shaheen said journalists, including those working for Western media outlets, have nothing to fear from a government that includes the Taliban.

“We have not issued letters to journalists (threatening them), especially to those who are working for foreign media outlets. They can continue their work even in the future,” he said. 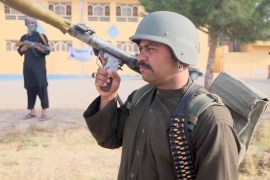 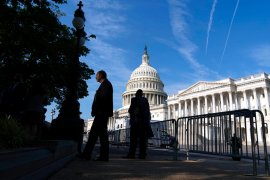 US House passes bill to provide 8,000 special visas for Afghans

US to evacuate thousands of Afghans and their families amid fears of Taliban retaliation. 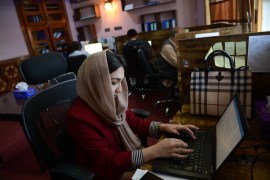 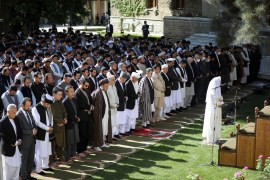