The United States-based ice cream maker, known for its creative, chunky flavours and progressive social stances, is already facing a punishing blowback by the Israeli government and rabbinical organisations worldwide.

Will Ben & Jerry’s, and its parent corporation Unilever, withstand the pressure and maintain its principled stand, or be forced to cave in? The questions will be a closely watched political and legal battle as Palestinian activists press US companies to boycott Israel.

“Ben and Jerry’s made a very courageous decision, and a risky decision,” said James Zogby, president of the Arab American Institute in Washington, DC.

“It’s really significant to focus on the calculation. Businesses don’t usually do stuff like that. This was a big deal,” Zogby told Al Jazeera.

But Alan Jope, the chief executive of Unilever, on Thursday distanced himself from Ben & Jerry’s decision, telling investors “that Unilever remains fully committed to our business in Israel”.

Jope, however, pointed out that Unilever, when it bought the ice cream company in 2000, agreed to allow Ben & Jerry’s and its independent board to continue their social justice activism.

The Israeli government is now threatening to use controversial anti-boycott laws that pro-Israel advocates have won in more than 30 US states to try to punish the ice cream maker for its decision.

If Israel fails in criminalising Ben & Jerry’s actions, that is likely to set a crucial precedent as the world increasingly views Israel as an apartheid state subject to boycotts like South Africa in the 1980s.

“It becomes a political struggle,” Zogby said. “This will be a big test to see whether or not Ben and Jerry’s can get away with it.”

Ben & Jerry’s announced its decision on July 19, saying in a statement posted on its website that continuing sales in occupied Palestinian territories are “inconsistent with our values” and acknowledging “concerns shared with us by our fans and trusted partners”.

Ben & Jerry’s said it intends to stay in Israel, but not the settlements which are widely deemed illegal in international law, although Israel disputes that.

The Israeli government’s reaction was swift. Israel Prime Minister Naftali Bennett telephoned the CEO of Unilever and warned of “severe consequences”. Israel would move “aggressively against any boycott”, Bennett said.

Israel Foreign Minister Yair Lapid issued a tweet threatening to invoke anti-boycott laws in the US to take enforcement action against the ice cream maker.

Over 30 states in the United States have passed anti-BDS legislation in recent years. I plan on asking each of them to enforce these laws against Ben & Jerry's. They will not treat the State of Israel like this without a response.

Gilad Erdan, Israel’s Ambassador to the US and the United Nations, followed up on July 20 announcing he had sent letters demanding action against Ben & Jerry’s to the governors of 35 US states seeking to reverse the company’s decision through economic pressure.

In the US, dozens of states and localities have passed so-called anti-BDS laws – a reference to the pro-Palestinian Boycott, Divestment, Sanctions (BDS) Movement.

The laws vary from state to state but generally seek to empower local governments to ban or cancel contracts with companies – like Ben & Jerry’s – that come out in support of boycotts, sanctions, or divestment from Israel.

Many of these anti-boycott laws have been ruled unconstitutional by courts as infringements of the right to free speech, which is protected under US and state constitutions.

“It’s disturbing that we have foreign officials here trying to enlist US lawmakers in cracking down on one of our country’s most time-honoured constitutional rights, in order to suppress growing dissent against Israel’s violation of Palestinian rights,” said Amira Mattar, a lawyer at Palestine Legal, which tracks anti-BDS legislation across the US.

“With public scrutiny comes action, and Ben & Jerry’s decision shows companies are listening and when they take a stand, it shakes the Israel lobby,” Mattar told Al Jazeera.

“It’s no surprise. Ben & Jerry’s is under tremendous pressure and I am sure there are calls to backtrack their support for Palestinian rights,” she said.

In 2019, the online accommodation service Airbnb, under fierce legal and political pressure from Israel and its supporters, reversed a decision to delist properties in Israeli settlements.

The official position of the US government and the Biden administration is to oppose any moves to boycott Israel.

In the US Senate, a bipartisan pair of senators have re-introduced anti-BDS legislation that has failed to gain sufficient support in the past.

“The boycott, divestment, and sanctions movement is the single most destructive campaign of economic warfare facing the Jewish state of Israel today,” Senator Marco Rubio, a Republican, said in June.

The bill seeks to address court decisions striking down state laws by attempting to give states a right to prevent business transactions with participants in the BDS movement. Courts in Texas, Maryland, Arkansas and Georgia have overturned anti-BDS state laws.

Ben & Jerry’s move gives more credence to the worldwide BDS movement and the issue will complicate Bennett’s upcoming visit to the US in August, Palestinian advocates say.

“What has become clear is that Israel is committing the crime of apartheid,” said Huwaida Arraf, a Palestinian-American activist and lawyer.

A United Nations list of more than 100 firms operating in Israeli settlements in the occupied West Bank is a “warning to them of their complicity”, she told Al Jazeera.

On July 21, the Movement for Black Lives joined with the US Campaign for Palestinian Rights and the Adalah Justice Project to issue a joint statement in support of Ben & Jerry’s decision.

Israel’s anti-BDS drive against Ben & Jerry’s is likely to “backfire”, said Ahmad Abuznaid, executive director of the US Campaign for Palestinian Rights.

“A lot of activists are working on campaigns across the country targeting different corporations and they are taking notice,” Abuznaid told Al Jazeera. 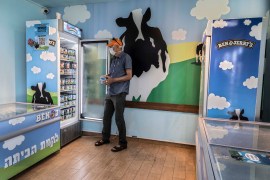 CEO Alan Jope said Ben & Jerry’s, which has a long history of social activism, had made the decision on its own. 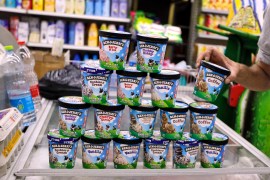 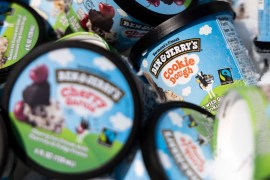 The Vermont-based ice cream maker says it recognises ‘the concerns shared with us by our fans and trusted partners’. 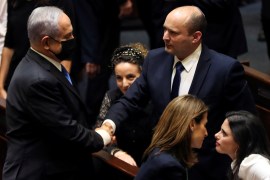