Speaking during a visit to the country’s flood-hit state of North Rhine-Westphalia on Tuesday, Merkel said Germany had a “very good warning system” but pledged a thorough review of “what worked and what didn’t work” in the wake of the natural disaster.

It was Merkel’s second visit to the region since the flooding, which killed at least 165 people in Germany and 31 in neighbouring Belgium.

She said the government would discuss using cell broadcast flood warning systems in the future following criticism that people in affected areas were not sufficiently warned of the danger.

Merkel said that under Germany’s federal system, the Weather Service and the Federal Office for Population and Disaster Protection had passed on information quickly to local governments but that they were unable to evacuate people ahead of the rapidly rising waters.

Under Germany’s federal system, it is up to the 16 regional states to organise responses to flood alerts and coordinate efforts with the civil protection office and the fire brigade.

“You can debate for a long time about the warning mechanisms,” Merkel said, while stressing that the country’s mobile phone app Nina had worked as planned in the face of the impending disaster.

She said that while those whose homes still had WiFi received warning messages, many who were out as mobile phone networks collapsed were deprived of emergency information.

“Perhaps the good old siren is more useful than we thought,” she added.

Her remarks came as authorities faced escalating criticism over events last week, which saw Europe’s richest economy caught flat-footed by a disaster that had been predicted days earlier.

There were mounting questions about how well-prepared local and national authorities were for the deluges that swept through defenceless towns and villages.

But critics pointed to failures in warning sirens, delayed evacuations and patchy mobile phone warning systems whose effectiveness was limited due to networks being knocked out and data protection concerns.

The parliamentary domestic affairs committee is due to meet next week to discuss how well the systems functioned.

With the country about 10 weeks away from national elections, the floods have put the crisis management skills of Germany’s leaders at the top of the political agenda.

But Armin Laschet, the state premier put forward by the party to succeed her as chancellor, has seen his own approval hit after he was filmed laughing as President Frank-Walter Steinmeier visited one of the flood zones.

The financial cost of Germany’s worst natural disaster in almost 60 years will also weigh heavily on the next government.

Coming on top of unprecedented spending on coronavirus relief measures, the cost is sure to run into the billions. Bavarian Environment Minister Thorsten Glauber said his southern state would spend 40 billion euros on flood defences in the coming 20 years.

For immediate relief, the federal government plans to provide 200 million euros ($236 million) in emergency aid to repair buildings and damaged local infrastructure, and to help people in crisis situations, a draft document, due to go to cabinet on Wednesday, showed.

That will come on top of 200 million euros that would come from the 16 federal states. The government also hopes for financial support from the European Union’s solidarity fund.

The disaster has also magnified the issue of climate change in Germany ahead of the September 26 poll that will mark the end of Merkel’s 16 years in power, with the 67-year-old having already announced she will not seek another term in office. 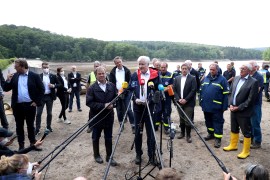 Critics have accused Germany’s government of overseeing a ‘systemic failure’ in emergency response to deadly deluges. 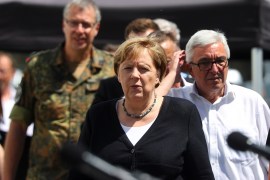 The German leader has expressed shock after visiting the flood-hit region and called for action against climate change. 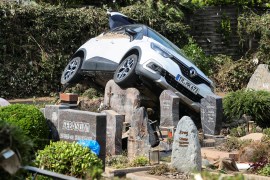