A United Nations rights expert has warned of “mass deaths from starvation, disease and exposure” in eastern Myanmar after “brutal, indiscriminate attacks” by the military forced tens of thousands of people to flee their homes in Kayah State.

In a statement on Wednesday, Tom Andrews, the UN special rapporteur for Myanmar, called for urgent international action, saying attacks by the military – which took power after a February coup – were “threatening the lives of many thousands of men, women and children” in Kayah or Karenni state.

“Let me blunt,” Andrews said.  “Mass deaths from starvation, disease, and exposure, on a scale we have not yet seen since the February 1 coup, could occur in Kayah State absent immediate action.”

Mass deaths from starvation, disease and exposure could occur in Kayah State after many of the 100,000 forced to flee into forests from junta bombs are now cut off from food, water and medicine by the junta. The international community must act. My full statement below. pic.twitter.com/69fxZHRMN7

The plea came hours after the UN office in Myanmar said the violence in Kayah had displaced an estimated 100,000 people, who were now seeking safety in forests, host communities and southern parts of neighbouring Shan state.

Those fleeing and those in locations affected by the bombing and artillery fire were in dire need of food, water, shelter, fuel and access to healthcare, the UN office said in a statement.

“This crisis could push people across international borders seeking safety,” it warned, calling for all parties to “take the necessary measures and precautions to protect civilians and civilian infrastructure”.

Myanmar has been in chaos since the military takeover, with daily protests across the country and fighting in border areas between the military and armed ethnic minority groups. Human rights groups say security forces have killed at least 849 people since the coup and detained 5,800 others.

People living in Kayah told Al Jazeera the military has launched indiscriminate air attacks and shelling in civilian areas after fighting broke out on May 21 between the security forces and a civilian resistance group calling itself the Karenni People’s Defense Force (KPDF).

There have been several deaths, including that of a 14-year-old boy who was shot dead in Loikaw township and a young man who was shot in the head with his hands tied behind his back. The military has repeatedly attacked churches in the predominantly Christian area, in one instance killing four people who were among 300 villagers sheltering at a Catholic church in Loikaw.

Security forces have also attacked and threatened humanitarian workers, while Andrews said he had received reports that soldiers were “stopping aid from reaching these desperate people” by setting up military blockades and laying landmines on public roads.

“Any pressure or leverage UN member states can put on the junta must now be exerted so that junta leader Min Aung Hlaing will immediately:  (1): open access roads and allow lifesaving aid to reach those in need, and (2) stop terrorizing the population by ceasing the aerial bombardment, shelling, and shooting of civilians.” 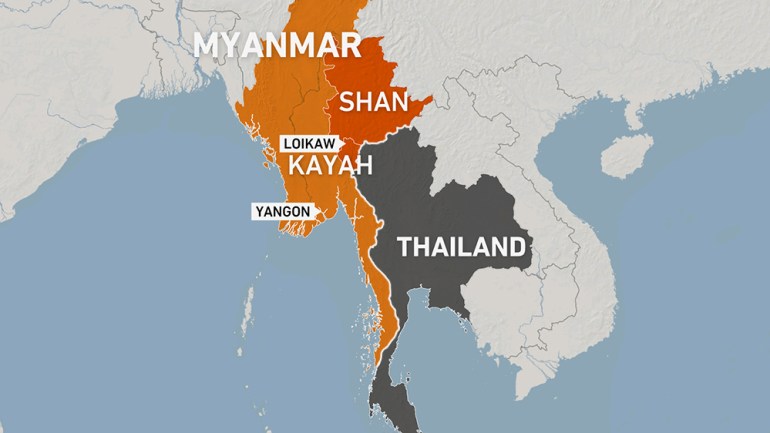 Andrews said the military’s attacks against civilians in Kayah was the “latest in a series throughout Myanmar causing massive displacement and humanitarian suffering, including in Mutraw in Karen State, Mindat in Chin State, and Bago City, among other areas”.

“Now more than ever, the international community must cut off access to the resources the junta relies on to continue these brutal attacks against the people of Myanmar,” he added.

Myanmar’s military has so far ignored international criticism of its violent crackdown and showed little sign of heeding a “Five-Point Consensus” agreed between Min Aung Hlaing and Southeast Asian leaders in April. The agreement – reached at a special summit of the Association of Southeast Asian Nations (ASEAN) – called for an end to violence, political talks and the naming of a regional special envoy.

On Monday, ASEAN foreign ministers met a Myanmar military envoy in China’s Chongqing and expressed concern over the army’s “painfully slow” progress on implementing the consensus. Wunna Maung Lwin, the military’s foreign minister, however, told the meeting: “The only way to ensure the democratic system that is disciplined and genuine” was through a military drafted five-point programme announced in the wake of February’s coup.

That plan has little similarities with the ASEAN consensus, and includes the establishment of a new elections commission – the military has claimed without evidence that the November 2020 election was fraudulent – measures against the COVID-19 pandemic as well as efforts for economic recovery.

In a statement, the Chinese foreign ministry said Wang met Wunna Maung Lwin and called for the implementation of the “Five-Point Consensus” and an end to “all kinds of violence” in Myanmar.

“We encourage all parties in Myanmar to engage in political dialogue within the constitutional and legal framework and restart the process of democratic transformation,” Wang said in the statement.