A herd of wild elephants has been making its way through a southern border province of China, capturing the attention of millions of Chinese social media users, but also highlighting the rapidly shrinking forest habitats in the country as a result of development.

CCTV footage of the 15 elephants, including three calves, has been aired on television and shared on social media showing the herd stomping through the streets of Yunnan province.

The Asian elephants have travelled more than 400km (248 miles) from their usual range on the border with Myanmar, and are now outside the provincial capital of Kunming, a city of about eight million people.

Their journey north has been monitored by millions of people online, although they have not been warmly welcomed by everyone.

Farmer Guo Zhuguang said that he was woken up after midnight on Wednesday by the elephants forcing their way into his courtyard.

Guo climbed onto his roof for safety as the elephants munched their way through the corn he had in storage.

“I was so scared. The local government wanted me to leave. But I didn’t expect that the elephants could actually break into my house, so I chose to stay at home,” he told Al Jazeera.

The damage did not end there, as the elephants also trampled over his rice field and smashed his fence.

Officials said that the herd destroyed more than a million dollars worth of properties.

Al Jazeera’s Katrina Yu, who is reporting from Kunming, said that hundreds of police have been deployed, setting up checkpoints to keep onlookers away as the elephants slowly move closer to the city.

“Authorities are concerned that the crowds getting too close to the herd could pose a threat to the animals and the people,” Yu said.

In recent years, several farmers have been killed in China following encounters with elephants.

While elephants have previously wandered outside their habitat in China’s forest reserve, it is the first time that they travelled so far to the north.

“The main driver is the decrease and fragmentation of the rainforest, where they live,” said Pan Wenjing of Greenpeace East Asia.

“And the reason is because of the expansion of human activities such as plantations, for example, tea and rubber as well as constructions.”

While the animals’ habitat has decreased, the elephant population – now numbering at more than 300 – has increased in the region.

According to Xinhua news agency, authorities are tracking the animals and baiting them with food to ensure their safety and prevent them from coming into contact with people.

Authorities are also reportedly trying to lure the elephants back to their original habitat, setting up roadblocks in an effort to turn them back.

But as the images suggest, the vagabond elephants are still enjoying their little adventure. 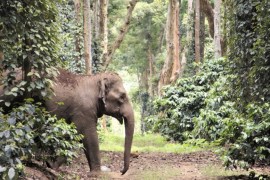 India: Elephants in My Backyard

As human-animal conflict escalates in India, a conservationist is determined to prove people and elephants can co-exist. 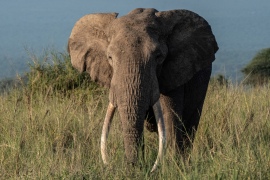 Opponents of an avocado farm in Kenya say it obstructs free movement of elephants and clashes with traditional land use. 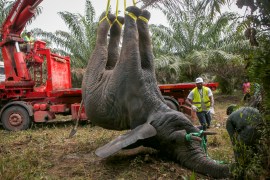 Number of forest elephants – found mostly in Central Africa – has fallen by 86 percent over the last 30 years.