Ouagadougou, Burkina Faso – Boubacar Dialo* says he can recall French troops visiting his town of Tin-Akof only once, in December 2020.

“They spent the whole day there touring the market,” says the local official of the northern Burkinabe town. “They came in an armoured vehicle and went into the shops. They went to the cattle market.”

With a peacetime population of about 9,000, Tin-Akof sits on the banks of the Beli River where Burkina Faso’s frontier converges with those of Mali and Niger. The tri-borders, as the region is known, is at the epicentre of a years-long conflict between state forces in the western portion of Africa’s Sahel region and armed groups linked to ISIL (ISIS) and al-Qaeda.

On June 10, French President Emmanuel Macron announced that Operation Barkhane, his country’s seven-year military operation in the Sahel, would come to an end, indicating there will be a troop drawdown and a restructuring of its presence in the region.

The vast majority of Barkhane’s 5,100 soldiers operate in the tri-border region. But France has no military bases in Burkina Faso, therefore military patrols in the country tend to be run out of Mali. 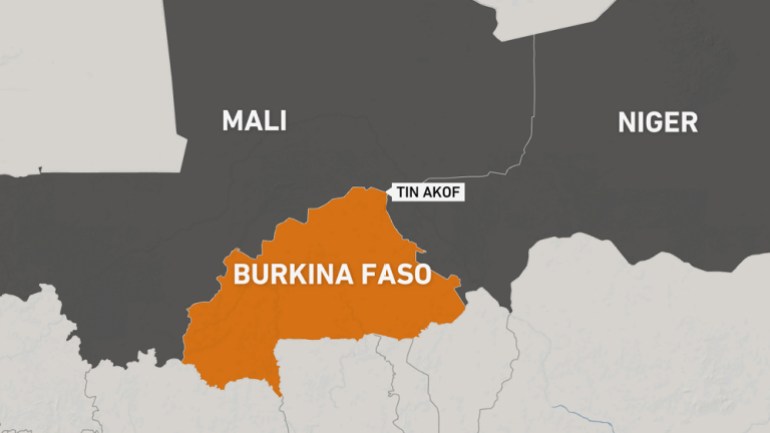 Dialo says security in Tin-Akof improved for a few weeks after the French forces’ visit, but then it deteriorated again and was worse than ever.

“Things have become much worse in Tin-Akof recently,” Dialo told Al Jazeera on the phone from Gorom Gorom, the nearest main town to Tin-Akof, from where he fled from three months ago.

Tin-Akof became lawless as government officials fled. Dialo says he was suffering from “fear and psychosis” himself.

“Terrorists have a chokehold on the area. There are no more markets, so the vehicles no longer come and there is no work. Before, [fighters] just came to loot our animals, kidnap the people they were looking for and leave. Now it’s come to the point where they just burn down whole villages.”

Asked what he thought about the prospect of the French leaving, he said, “I think it’s not good for the people here. We’re just three kilometres away from the border with Mali and if the French are no longer in Mali, that could mean we have even more terrorists coming over here.”

Earlier this month, Macron suspended joint operations between French and Malian soldiers in response to a military coup in Bamako, the second in nine months.

Statistically, Barkhane has done little to quell the violence in the Sahel.

Data from The Armed Conflict and Event Data Project shows that since Operation Barkhane began in 2014, after French forces helped beat back advancing fighters in Mali, the number of deaths in Mali, Burkina Faso and Niger’s conflicts rose from 456 in 2014 to 6,276 in 2020 – a 1,376 percent increase.

Burkina Faso’s largest attack since its conflict began occurred earlier this month in the village of Solhan, leaving dozens of people dead and cementing public perception in the country that security is getting worse. A series of protests against insecurity followed last weekend.

Analysts say it is still unclear exactly what the end of Operation Barkhane means, however. While it could simply be a rebranding exercise on the part of the French, it could lead to changes that are much more profound.

“There are more questions than answers at this point,” says Judd Devermont, director of the Africa programme for the Center for Strategic and International Studies, a United States-based think-tank. “France’s footprint will shrink, but it will remain engaged with, and through its Sahelian partners as part of the G5 Sahel Joint Force or European partners, under the auspices of Operation Takuba.”

The leaders of Burkina Faso, Chad, Mali, Mauritania and Niger created the G5 Sahel force in 2014 to help tackle a number of challenges, including the growing threat of armed groups. France, meanwhile, is hoping that Takuba, which is supposed to bring together troops from the European Union to provide security in the Sahel, will fill gaps left as it pulls out of the region.

There has been, however, little enthusiasm for Takuba from European partners so far.

Devermont suggests the US is unlikely to step up its engagement in the Sahel, despite the recent change of administration in the White House.

“The French will remain integral to the counterterrorism fight, albeit from behind the curtain and taking centre stage only in extremis,” he predicts.

Andrew Lebovich, a policy fellow for the  European Council on Foreign Relations (ECFR) and expert on the Sahel conflict, expects “significant changes” to happen, but adds “they’re going to be gradual”.

“All of this is going to have an effect … but France is less involved in Burkina Faso than it is in Mali or even in Niger.”

Some Burkinabes Al Jazeera spoke to said if the French leave, they could see Russia filling the vacuum. But Lebovich says he believes “this is a bit of a red herring”.

“Russia certainly has a presence in the Sahel, but it’s not as coherent, it’s not as interest-driven as in the Central African Republic, for instance … I certainly don’t see Russia wanting or trying to occupy the space that France does.”

Other displaced citizens of Tin-Akof, where there is no mobile phone network, told Al Jazeera the French presence in or around the town had made little difference and that the news of Barkhane’s ending was unlikely to change much.

But one of the top officials in Tin-Akof’s administration before he fled the town said, “Since the establishment of Bakhane, things have been reasonable. There is security when the French are there. It is when they leave the attacks multiply. They kill a lot of terrorists.”

French officials are expected to give more details on how Barkhane will be restructured or scaled down this week.