Tehran, Iran – Fifty-seven-year-old Mehri took out her identity card and pointed to all the stamps on it.

The widowed stay-at-home mother-of-one lives in a small rented apartment in the south of Iran’s capital, Tehran. She relies on a weekly payment sent by her 30-year-old son, who lives with his wife and has a child on the way.

Under immense financial pressure and seeing no clear way out, she did not want to vote in Iran’s presidential election this time – but was persuaded by her son.

“Last time I voted for the key, this time I’m voting for the lock to see what happens,” Mehri told Al Jazeera on Friday in reference to what became outgoing President Hassan Rouhani’s election symbol when he first stood in 2013, and again in 2017, and his opponent Ebrahim Raisi.

Raisi, the current chief justice, was defeated by a wide margin in 2017 when he received almost 16 million votes, or 38 percent, to Rouhani’s more than 23 million ballots, or 57 percent.

This time, though, he is by far the frontrunner among the four candidates seeking the presidency.

Inside the polling stations set up at the Shah Abdol-Azim shrine, a major monument in Rey, one of the southernmost areas of the capital, everyone seemed to want to vote for him.

“I hope he moves forward with a plan and can solve peoples’ problems,” 40-year-old Afsaneh Norouzi told Al Jazeera about the conservative candidate beloved by the so-called revolutionary camp and its base.

“This inflation and expensiveness are hurting people. I hope what he says is not just a slogan and he can really act,” said the housewife, who was there with her daughter, a first-time voter.

A group of young men, all also first-time voters, chatted among themselves as they cast their ballot in the blistering heat of the afternoon sun.

They seemed nonchalant. “I don’t have any special expectations,” said one after voting for Raisi, with another adding, “We just got caught in the buzz, we don’t really know what to expect.”

In an election where the winner seems all but certain, turnout – which many expect will be low – has become a central issue.

About 59.3 million of Iran’s roughly 83-million population are eligible to vote, of whom more than 1.3 million are first-time voters.

The number of eligible voters also includes about 3.5 million Iranians living outside the country, according to Iran’s foreign ministry, which said ballots are accepted in Iranian embassies and consulates in 133 countries.

The ministry has harshly criticised Canada, where approximately 400,000 Iranians are eligible, for refusing to allow voting, telling Iranians to instead head to stations set up in several states in the neighbouring United States.

While reports by conservative Iranian media on Friday indicated turnout may be higher than expected, the election is still projected to have some of the lowest voter participation since the 1979 revolution.

The lowest presidential turnout over the past four decades was registered at just more than 50 percent in 1993, when the late Akbar Hashemi Rafsanjani won re-election. Last year’s parliamentary election, which was also marked by wide disqualification of reformists, like in the presidential poll, saw a 42 percent turnout.

The dimmed public enthusiasm for the election is something that is also reflected in Iranian officials’ rhetoric leading up to the polls.

On Wednesday, Supreme Leader Ayatollah Ali Khamenei said during a televised speech that while he recognised that some people were dissatisfied due to the state of the economy and their livelihoods, they must not shy away from the polls as it would increase outside pressure by Iran’s “enemies”.

After casting his vote earlier on Friday, he said, “Even a single vote matters, nobody must say what will happen with my one vote?”

Despite earlier criticising the “removal” of reformist and moderate candidates by the vetting body known as the Guardian Council and the threat it could pose to the legitimacy of the republic, all the top officials of Rouhani’s government publicly urged people to vote.

The message, however, seems to not be getting through to many Iranians who are concerned about the future but also disillusioned due to a host of issues – not just limited to the economy, but also social freedoms.

“I’m just exhausted of the pressure from inside and outside the country, and I’m hopeless that my vote could change anything this time,” said a 28-year-old man, who voted in 2017 and 2013, and who asked not to be named.

“I think at this point false hope would be worse than feeling hopeless,” he told Al Jazeera, adding he elected to stay in on Friday.

Iran is under the harshest US sanctions it has ever experienced after former President Donald Trump in 2018 unilaterally abandoned Iran’s 2015 nuclear deal with world powers.

Another person, asking to remain anonymous, who had previously voted for Rouhani, also said he chose to refrain from voting this year.

“Maybe I would have voted if there was a chance Hemmati would win,” the 34-year-old said in reference to Abdolnaser Hemmati, one of four candidates and the only moderate left on the ballot.

But voting under these circumstances, he said, “would only signal to the establishment that people vote no matter the situation and so they would make it worse next time”.

Indeed, Hemmati himself and Rouhani have warned that “removing” candidates could not only hurt the legitimacy of the establishment and eliminate competition, but also undermine the republic element of the Islamic Republic.

“Whatever the result, I’m happy with my decision. My vote for Hemmati was a vote to preserve the republic and save Iran,” wrote Twitter user Mahsa Soltani, along with a picture of herself with her vote.

Another user, journalist Zeinab Safari, tweeted that she voted “not to gain anything, but to prevent the loss of the very little that remains”. 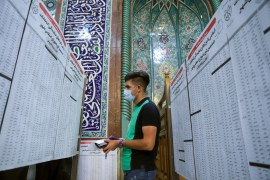 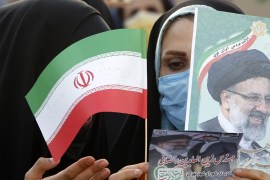 Zero women out of the 40 who registered as candidates were approved to run for the presidency. 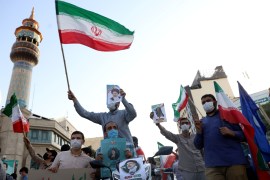 Between the pandemic, economic sanctions and international isolation – the stakes are high for Iran’s election. 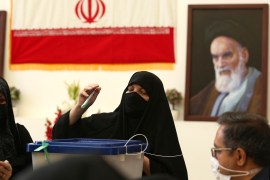 Iranians are choosing a new president with the ballot offering four candidates, including frontrunner Ebrahim Raisi.