Turkish President Recep Tayyip Erdogan has said he told his United States counterpart, Joe Biden, that Ankara will not change its stance on its Russian S-400 missile defences over which it has been sanctioned by Washington.

The two leaders sounded upbeat after their face-to-face talks on the sidelines of a NATO summit on Monday, although there was no announcement of any significant breakthroughs in disputes, including the S-400s, Syria and other issues.

Turkey’s purchase of the S-400s has strained ties with the US and other NATO allies over concerns that the systems are not compatible with the alliance’s defences and may threaten the US F-35 fighter jets. Ankara, which was expelled from the jet programme over the Russian systems, rejects the concerns.

“I told [Biden] that they should not expect Turkey to take a different step on the F-35 and S-400 issues because we did what we had to for the F-35s and gave the necessary money,” Erdogan told reporters on a return flight from Azerbaijan on Thursday.

“We must monitor developments closely. We will be following up on all our rights,” he said.

“In the next period, our foreign ministers, defence ministers and defence industry chairs will be moving this process forward by meeting with their counterparts.”

Ankara and Washington have been trying to put aside their differences and focus on areas of cooperation, such as Afghanistan and Syria, although Turkey has been infuriated by the US support for the Kurdish People’s Protection Units (YPG) militia in Syria, which it considers “a terrorist group”.

Erdogan said he conveyed Turkey’s views on the issue at his meeting with Biden, according to state-run Anadolu news agency.

Turkey has also offered to guard and operate Kabul’s airport after US and NATO forces withdraw.

NATO head Jens Stoltenberg said on Monday Turkey would play a key role there but that no decision was made at the summit.

“Following the US decision to withdraw from Afghanistan, Turkey can take up a lot more responsibilities here,” Erdogan said, without elaborating.

Last week, the Taliban said Turkey should withdraw troops from Afghanistan under the 2020 US pullout deal, effectively rejecting Ankara’s proposal over the Kabul airport.

The Taliban in April also refused to participate in a peace conference on Afghanistan hosted by Turkey.

Erdogan said on Monday that Turkey would continue talks with the Taliban on the issue, but that there were no issues with the planning of the airport mission. 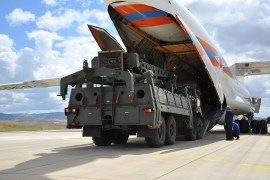 Turkey signals compromise with US over Russian S-400 missiles

Purchase of air defence system has put extra strain on US-Turkey ties, which have also been complicated by Syria’s war. 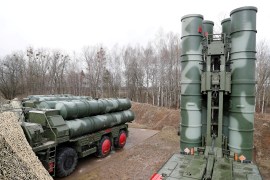