Some 30 German soldiers are being recalled from service in Lithuania, with ringleaders facing immediate dismissal, after they were accused of making racist and anti-Semitic remarks and of sexual violence, a German military spokesperson said.

The soldiers were in Lithuania as part of NATO’s Enhanced Forward Presence mission providing protection to Lithuania, Latvia and Estonia by deterring Russia.

Der Spiegel earlier reported that some German soldiers had got so drunk in a hotel that military police had to be called.

Further investigations found that soldiers had sung a birthday song for Nazi leader Adolf Hitler at an earlier gathering.

Beyond violating their oaths, the soldiers were accused of “giving offence with racist and anti-Semitic overtones and showing extremist behaviour”, the spokesperson said. They would be back in Germany on Thursday.

“Such behaviour is not only inexcusable but brings shame on us all,” she added.

Much of Germany’s post-war foreign policy has been focused on showing atonement for the crimes of Hitler’s Third Reich, which murdered many millions in the Holocaust of Europe’s Jews, one of the worst crimes in human history.

Numerous instances where some members of the police and the military were found showing Nazi sympathies have garnered enormous attention from authorities and the media.

Germany’s deployment in the eastern Baltic has added sensitivity since its soldiers last served there in World War II, where they and members of the German SS committed some of the war’s bloodiest crimes in what were then the western marches of the Soviet Union.

The investigation had also found that 569 rounds of ammunition were missing from inventories, though this could have been due to soldiers miscounting at the end of a firing exercise.

The German military’s general inspector had apologised to his Lithuanian counterpart, the spokesperson said. 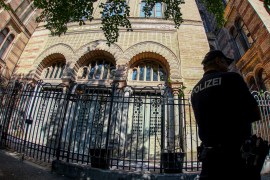 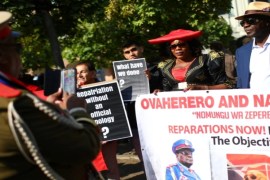 How should countries deal with historical atrocities?

Germany apologises for genocide of Indigenous tribes in Namibia, but critics say the compensation deal is an ‘insult’. 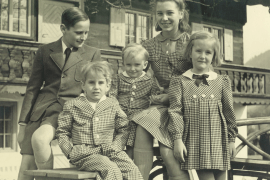 ‘I knew my father would be hanged’: Remembering Nuremberg

The son of a senior Nazi sentenced to death at the Nuremberg trials on growing up in the shadow of his father’s crimes.