The European Union’s top court should rule that measures introduced by Poland’s ruling Law and Justice (PiS) party to discipline judges contradict the bloc’s laws, a court adviser has said ahead of a final ruling due in the coming months.

In an opinion on Thursday, Advocate General Evgeni Tanchev recommended that the European Court of Justice (ECJ) rule that the Disciplinary Chamber of the Supreme Court is not in line with EU law.

The development was the latest in an ongoing dispute between the 27-member bloc and the conservative, populist party, which has reshaped Poland’s justice system since it came to power in 2015 to give authorities new powers over the courts.

PiS has defended its moves, saying it is seeking to reform an inefficient and corrupt justice system. Critics, however, see that as a pretext for the party seizing control of the country’s courts.

In 2017, it created a body – the Disciplinary Chamber – at Poland’s Supreme Court with the power to discipline judges, including those of the lower courts.

Many judges in the country fear the chamber is a tool to pressure judges to issue rulings that favour the ruling authorities.

While PiS has taken control of the highest courts, many lower court judges continue to show their independence, some issuing rulings against government officials or interests.

Tanchev also said Poland’s broad new definition of disciplinary offences had a “chilling effect” among judges by weakening their protections and independence.

Such legal opinions are not legally binding but are often followed by the ECJ. The judges of the top EU court are now beginning their deliberations in the case and a judgment is expected later this year.

‘Destruction of Poland’s rule of law’

The European Commission, which ensures that EU law is respected by the member states, brought a complaint to the ECJ over the issue. It believes that independence and the impartiality of the Disciplinary Chamber cannot be guaranteed.

The Luxembourg-based ECJ has already ordered the suspension of the Disciplinary Chamber pending a final ruling on whether it offers sufficient guarantees of judicial independence. However, the chamber has continued to work despite the ruling.

The chamber is composed of judges selected by the National Council of the Judiciary, a body whose members are chosen by the parliament, where PiS holds a majority.

The news of Tanchev’s opinion arrived in Warsaw as lawyers and others gathered outside the Supreme Court as the Disciplinary Chamber was hearing the case of a judge.

Michal Wawrykiewicz, a lawyer with Free Courts, a group fighting for judicial independence, delivered a message in English to the television cameras.

“Dear judges of the European Court of Justice, hear the voices of Polish lawyers, citizens, who are horrified by the destruction of Poland’s rule of law,” Wawrykiewicz said.

“We are doing everything what is in our power,” he said. “Please help us restore European standards of an independent judiciary in Poland. Now it is your turn.” 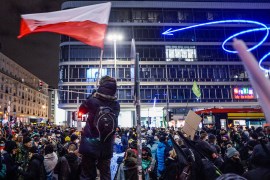 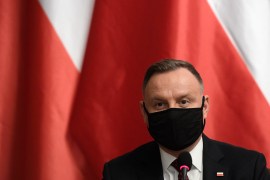 Jakub Zulczyk charged with insulting Andrzej Duda over his comments on Biden and the US election outcome. 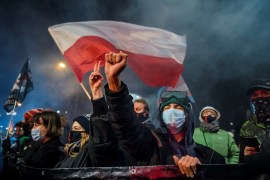 Court ruling bans all abortions except in cases of rape and incest, or when the mother’s life or health is at risk. 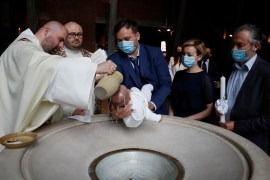 As deaths spike at rates not seen since World War II, births are declining.