A leading Muslim group in Austria has said it plans to file a lawsuit against the government of Chancellor Sebastian Kurz for unveiling a controversial “Islam map”, according to Austrian media reports.

Muslim Youth Austria lambasted the government for publishing a “political Islam map”, which identifies the locations of mosques and Muslim associations around the country.

“The publication of all names, functions and addresses of Muslim institutions and institutions that have been read as Muslim represents an unprecedented crossing of boundaries,” the group was quoted as saying on Saturday.

Integration Minister Susanne Raab launched a website on Thursday, called the National Map of Islam, with the names and locations of more than 620 mosques, associations, and officials and their possible connections abroad.

The group Islamic Religious Community in Austria (IGGOE) warned against stigmatising all Muslims living in Austria “as a potential danger to society and the democratic legal order in the country”.

This campaign is fuelling racism and “exposes Muslim citizens to a massive security risk”, the IGGOE added.

The Austrian chancellor has repeatedly lashed out at what he calls “political Islam”.

According to the integration minister, the map was not aimed at “placing Muslims in general under suspicion”.

The objective was “to fight political ideologies, not religion”, she said.

Reports of anti-Muslim attacks in Austria have increased since a deadly attack in Vienna last November.

The map has raised tensions between Kurz’s conservative Austrian People’s Party and its coalition partner, the Green Party.

The Austrian Green Party’s spokeswoman for integration and diversity Faika El-Nagashi wrote on Twitter on Thursday that no member of the party was involved in it or informed about it in advance.

“It is important for Austria to stop targeting immigrants and Muslims by labelling them and to adopt a responsible policy,” it said. 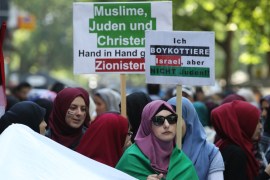 ‘Accusations of anti-Semitism are being misused to push aside important voices,’ say high-profile figures in the arts. 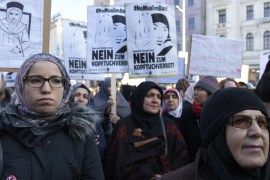 The court ruled that the law, which prevented girls younger than 10 from wearing the headscarf, was ‘discriminatory’. 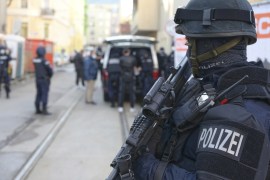 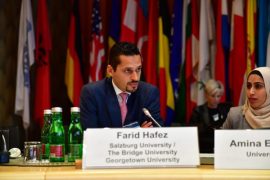 Months after officers barged into the home of Farid Hafez, who has still not been charged, he is being treated for PTSD.