Japan has extended a coronavirus state of emergency in Tokyo and other areas for 20 more days, with infections still not slowing as it prepares to host the Olympics in just over 50 days.

“I am aware that many people are voicing concern about holding the Olympics and Paralympics,” he said. “I take them seriously, and I will proceed with preparations for a safe and secure Games.”

He said the next three weeks are “an extremely important time for us to achieve results” in a two-pronged battle to control infections while expanding vaccinations.

The current state of emergency in the capital and eight other metropolitan areas was to end next Monday, but hospitals in some areas are still overflowing with COVID-19 patients and serious cases have recently hit new highs.

The 20-day extension covers nine areas ranging from Hokkaido in the north to Fukuoka in the south. A 10th area, the southern island prefecture of Okinawa, is already under emergency status through June 20.

Olympic organisers must decide at about that time whether to allow any fans at all, after overseas spectators were banned months ago. A plan to prioritise vaccinations for Japanese athletes is expected to begin around then, according to media reports.

The Olympics are scheduled to start July 23 after a one-year postponement due to the pandemic, and worries about new variants and Japan’s slow vaccination rollout have triggered calls from the public, medical experts and even a sponsor to cancel the games.

On Thursday, Naoto Ueyama, chair of the minor Japan Doctors Union, warned the Games could produce a “Tokyo Olympic strain” of coronavirus and urged a cancellation to prevent a “disaster”.

Haruo Ozaki, head of the larger Tokyo Medical Association with more than 20,000 members, said organisers would have to bar all spectators at a “minimum”.

Even under the current state of emergency, sports venues in Japan are allowed to seat 5,000 spectators or 50 percent capacity, whichever is smallest.

Suga’s public support ratings have plunged to about 30 percent from around 70 percent when he took office in September.

Experts have warned that variants are infecting more people, leaving them seriously ill and flooding hospitals in some areas.

Japan has lagged on vaccinations due to bureaucratic and planning missteps and shortages of medical staff.

Only 2.3 percent of the population has been fully vaccinated, and the current phase targeting older adults is not scheduled to finish before the Games start.

Still, Suga and his government are determined to host the Olympics. The International Olympic Committee has also said the Games will go ahead, even if host city Tokyo is under emergency measures.

Officials have been trying to drive home the message that the Games will be safe, announcing recently that the vast majority of those in the Olympic village will be vaccinated.

Despite the negative polling and warnings against the Games, protests against the event tend to attract just a few dozen people.

The government has been pushing to speed up inoculations and aims to administer up to 1 million a day, but some experts say that’s an overly optimistic target. 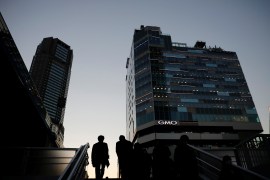 Decline was on the back of a hit in private consumption as a state of emergency to curb the virus kept people at home. 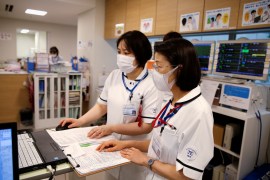 Doctors in region join calls for Olympics cancellation as hospitals struggle to treat those sick with coronavirus. 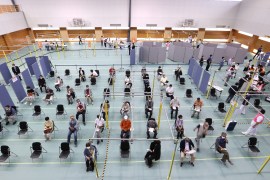 Japan opens mass vaccination sites for elderly ahead of Olympics

Centres in Tokyo, Osaka and other cities will vaccinate thousands of elderly people every day. 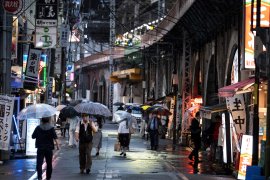 US warns against travel to Japan as country grapples COVID surge

US says coronavirus surge makes it risky for citizens to travel to Japan, just two months ahead of Tokyo Olympics.