New Delhi, India – Doctors fighting a ferocious second wave of the coronavirus in India are furious over “insulting and insensitive” remarks made by a yoga guru and businessman, with their union serving a defamation notice and demanding an “apology within 15 days”.

“Allopathy is a stupid and bankrupt science. First Chloroquine failed, then Remdesivir failed, then their antibiotics failed, then steroids, now a ban has been imposed on plasma therapy. Now they are prescribing Fabiflu which too has failed,” Ram Kisan Yadav, aka Baba Ramdev, told his followers last week.

“More people died of allopathic treatment than those who died of oxygen shortage or because of COVID-19,” the 55-year-old saffron-robed guru said, triggering a huge backlash by India’s medical fraternity, which has demanded action against him.

As the video featuring Ramdev’s statements went viral on social media platforms, the Indian Medical Association (IMA), a body that represents the country’s doctors, hit out at the guru.

“He (Ramdev) has belittled the sacrifice of more than 1200 doctors who have laid down their lives in the line of duty serving mankind during the pandemic,” said a statement released by the IMA on Saturday.

On Wednesday, the IMA served a defamation notice on the guru for his “disparaging remarks” against allopathy and allopathic doctors and demanded an apology within 15 days or a $137m compensation, Press Trust of India reported.

IMA serves defamation notice on Ramdev for his alleged disparaging remarks against allopathy and allopathic doctors, demanding an apology within 15 days or Rs 1,000 crore compensation from him.

The Resident Doctors Association at the government-run All India Institute of Medical Sciences (AIIMS) in the capital New Delhi also condemned Ramdev’s remarks, demanding “strictest steps be taken” against him.

Ramdev’s company, Patanjali Yogpeeth, released a statement on Saturday, saying, he has “no ill-will against modern science and good practitioners of modern science”.

“What is being attributed against him is false and nugatory,” it said.

The next day, federal Health Minister Dr Harsh Vardhan wrote a two-page letter to Ramdev, urging him to withdraw his “objectionable statement completely”.

“You must be made aware of the fact that the cure for all the serious illnesses such as chickenpox, polio, Ebola, SARS and tuberculosis were developed in allopathy. Even the development of vaccines in the fight against pandemic is the result of allopathy,” the minister wrote.

“It’s very unfortunate for you to say that people died from consuming allopathic medicines.”

Ramdev wrote back to Vardhan on the same day, expressing regret and withdrawing his remarks.

“I was reading out a WhatsApp message with my followers. I regret my remarks if it has hurt the sentiments of anyone,” he wrote.

But the back-handed apology did not last 24 hours. On Monday, Ramdev again took a swipe at allopathy, asking if it has the cure for a number of diseases he listed in an open letter.

“If allopathy is so efficient, why do allopathic doctors fall ill and does allopathy have any medicine to ensure transition of a violent man into a decent one?” he asked.

Dr Jaswant of the Resident Doctors Association at AIIMS told Al Jazeera the “language of (Ramdev’s) letter is not an apology”.

“The government must take stringent action against him for his irresponsible and disgraceful comments on allopathic doctors,” he said.

Dr Mukesh Verma of the IMA wrote to the Delhi Police and met senior police officers to register a criminal complaint against Ramdev. But no first information report (FIR) has yet been registered.

“Baba (Ramdev) is very powerful, equivalent to union minister and more than the chief ministers of many states. His proximity to power is well known and that is why I guess police are unwilling to book him,” Verma told Al Jazeera, calling Vardhan’s letter to the guru an “eyewash”.

The IMA’s Uttarakhand state chapter said the “anguish and anger of the doctors” over Ramdev’s remarks “might jeopardise our fight against this devastating pandemic”.

Ramdev’s Patanjali did not respond to repeated requests made over telephone by Al Jazeera seeking its comments on the allegations. A detailed questionnaire has been sent to them by email.

Ramdev, who counts some of India’s most powerful politicians in the governing Bharatiya Janata Party (BJP) as his friends, is not new to controversy.

“God has given us free oxygen, why don’t we breathe that? How can there be a shortage when God has filled the atmosphere with oxygen?” he said in the video. “Fools are looking for oxygen cylinders. Just breathe the free oxygen. Why are you complaining about shortage of oxygen and beds and crematoriums?”

In June last year, as the pandemic spread across the country, Ramdev’s company claimed to have developed the first ayurvedic medicine to cure COVID-19 in seven days.

India’s Ministry of Ayurveda, Yoga & Naturopathy, Unani, Siddha and Homoeopathy (AYUSH) banned Patanjali from selling Coronil as a “cure” until the medicine was cleared by drug agencies.

In February this year, Ramdev, in the presence of two federal ministers – Vardhan and Nitin Gadkari – claimed that Coronil had received certification from the World Health Organization (WHO).

A month later, IMA said the Central Drugs Standard Control Organisation (CDSCO) had not given permission for the use of Coronil for the treatment of COVID-19. WHO also clarified it had neither reviewed nor certified the efficacy of Patanjali’s medicine.

But the controversy did not stop Patanjali from selling Coronil kits across the country as an “immunity booster” against the virus.

On Monday, the BJP government in Haryana state announced it would distribute 100,000 Coronil kits among COVID-19 patients free of cost.

“We respect and support all the alternative medicines including ayurveda, homeopathy, naturopathy, allopathy and others,” BJP spokesman Gopal Krishna Agarwal told Al Jazeera.

Doctors feel Ramdev is trying “to create a false sense of fear and frustration within the public at large so that he can sell his illegal and unapproved so-called medicines and make money at the cost of the public”.

“Ramdev loves controversy. He is trying to make use of this attention to further his business propaganda,” said Dr Jaswant.

“First, to advance his business interests by demeaning allopathy. Second, this might be a deeper conspiracy to deflect the attention of the public from the government to doctors,” said Dr Verma.

Dr Verma said the federal government, facing heat for its handling of the pandemic, “might be using doctors as the scapegoat”. 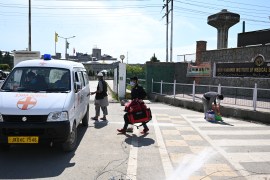 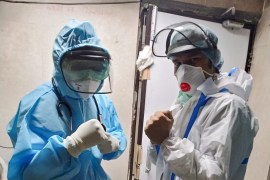 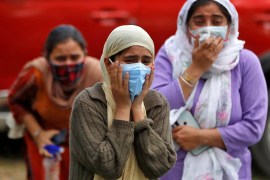 COVID strain first detected in India found in 53 territories: WHO

WHO also receives information the B.1.617 variant has been found in seven other territories, UN agency’s update shows. 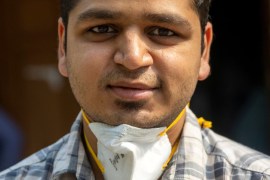 ‘Who to be saved and who not to be should be decided by God… But at this point in time, we are being made to do this.’