An Indian couple has chartered a passenger jet to stage a midair wedding that violated coronavirus restrictions by taking more than 160 guests, reports said.

India’s civil aviation authority has ordered an investigation and suspended the crew of the jet, officials said on Monday.

Because of a brutal new coronavirus wave that saw India’s death toll passed 300,000 on Monday, most states only allow 50 guests at weddings but 161 friends and family of the newlyweds were on the jet on Sunday.

The couple, who have not been named, were married as the SpiceJet plane flew over the historic Meenakshi Amman temple on its way from Madurai to Bengaluru, the Hindustan Times newspaper said.

Film and photos of the on board celebrations were posted on social media. They show people with flowers around their necks and taking selfies but could not be immediately verified by AFP news agency.

A couple tied the knot on-board a chartered flight from Madurai, Tamil Nadu. Their relatives & guests were on the same flight.

In breach of civil aviation rules, hardly any of them are wearing masks and social-distancing rules are blatantly ignored.

The Directorate General of Civil Aviation has told SpiceJet to take action against the newlyweds and their guests, reports said. All could be banned from taking passenger flights.

“The agent and the guest passengers were briefed in detail, both in writing as well as verbally, on social distancing and safety norms to be followed as per COVID guidelines both at the airport and onboard the aircraft throughout the journey,” a SpiceJet spokesperson told Indian media.

“Despite repeated requests and reminders, the passengers did not follow COVID guidelines and the airline is taking appropriate action as per rules,” the official added.

Several states have imposed tough lockdowns over the past six weeks as India suffers a devastating coronavirus wave that has seen more than 120,000 deaths.

With more than 26 million cases now recorded, Indian hospitals have been overwhelmed and experts say the toll is certainly much higher. 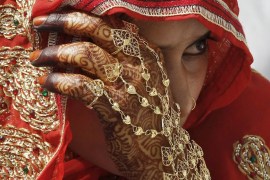 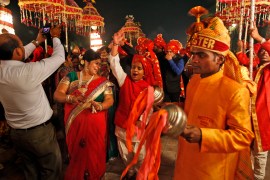 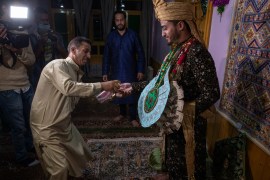 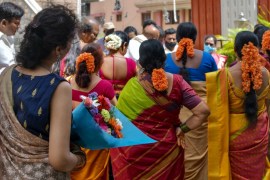 Coronavirus: How an Indian wedding and funeral infected 100

Bride not among 111 people who have tested positive after attending wedding, where groom showed COVID-19 symptoms.