A leading female Bangladesh journalist, who reported on official corruption during the government’s response to the COVID-19 pandemic, has been granted conditional bail after her detention sparked days of nationwide protests and drew international condemnation.

Rozina Islam, 42, an investigative reporter for the country’s largest Bengali daily Prothom Alo, was arrested by police on Monday under the Official Secrets Act, which carries a possible death penalty. She was later charged with stealing health ministry documents.

Islam was granted bail on Sunday after being ordered to surrender her passport and pay a bail bond of 5,000 taka ($60) by the chief metropolitan magistrate of the capital Dhaka, her lawyer told reporters.

Prosecution lawyer Abdullah Abu did not object to the bail request, and both sides told reporters that Magistrate Baki Billah mentioned in his order that the media plays a supporting role in democracy.

“We did not oppose her ad interim bail provided she submits her passport,” Dhaka’s chief prosecutor Abdullah Abu told AFP.

The passport submission was to prevent her from leaving the country, he said, adding that Islam was expected to be released from detention later on Sunday.

Journalist unions and advocacy groups said Islam was detained for her stories, which included allegations that urgently needed medical equipment was left at Dhaka airport for months, and that bribes had been offered to recruit doctors.

Islam was arrested after she allegedly used her mobile phone without permission to photograph documents related to government negotiations to buy coronavirus vaccines while she waited in the room of an official involved in the process, according to case documents seen by The Associated Press.

Several of Islam’s hard-hitting reports on corruption involving the Ministry of Health and others have drawn attention to the millions of dollars spent on procuring health equipment to deal with the pandemic.

Her detention triggered nationwide protests by thousands of journalists as well as political and civil rights activists. Rights groups say a crackdown on the media has grown during the coronavirus crisis.

Bangladesh has reported nearly 800,000 coronavirus infections and more than 12,300 deaths so far, but experts say the actual numbers are likely to be much higher.

The general secretary of Bangladesh’s National Press Club welcomed the court’s bail decision but called for the case against her to be dropped. “She has been asked to submit her passport, which is a curb on her freedom of movement,” Elias Khan told AFP.

“We have demanded that all the cases against her are withdrawn immediately… Bangladesh journalists still operate in a climate of fear.”

Her family said Islam was held for more than five hours on Monday in the room of a personal assistant of the Ministry of Health secretary. Her sister said Islam was physically and mentally harassed before she was handed over to police.

“Instead of locking up critics, encouraging a free press should be central to the government’s strategy to strengthen health services in combating the pandemic,” Brad Adams, Asia director of Human Rights Watch said.

The New York-based watchdog said at least 247 journalists had reportedly been subjected to attacks, harassment and intimidation by state officials and others affiliated with the government in 2020.

More than 900 cases were filed under the Digital Security Act, with nearly 1,000 people charged and 353 detained, many of them journalists, it said. 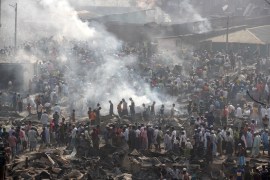 Bangladesh defends use of fences after deadly Rohingya camp fire 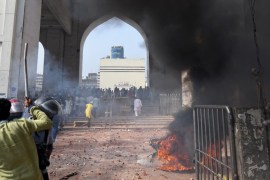 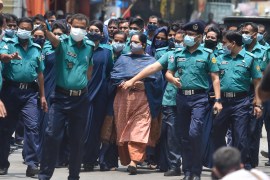 Rozina Islam has been accused of stealing documents after she unearthed corruption in health ministry during COVID-19. 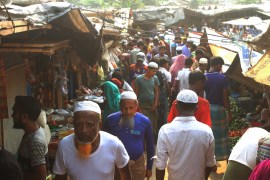 Crowded camps that are home to hundreds of thousands of refugees placed under lockdown after alarming spread of virus.