New Delhi, India – Outside the gates of Sardar Patel COVID Care Centre (SPCCC), a makeshift hospital built by the Delhi government, a 55-year-old woman’s body is lying on the sidewalk.

Her daughter, 32, and teenage grandson sit next to the body, crying, as they hold her lifeless hands. An hour later, an ambulance arrives. Three men come out it and start wearing their personal protective equipment (PPE) gear.

“This is something that happens everyday for the past few weeks and we are used to seeing death at this scale now,” ambulance driver Dipu, who goes by his first name, told Al Jazeera.

Before the pandemic, Dipu used to carry patients to the hospital. Today, he is one among hundreds of COVID body collectors as India reels under a ferocious second wave of the coronavirus.

Amid the deadly surge, patients are struggling to access medical care due to a lack of hospital beds and medical oxygen supply. In such a scenario, many are resorting to take care of themselves or their loved ones at home.

Health experts however believe the figures are an undercount and total deaths and infections could be five to ten times higher.

Meanwhile, the relatives of the woman who died outside the hospital were crying so profusely that even the patient’s name could not be recorded.

“We couldn’t find oxygen cylinders since the morning, no hospital was ready to admit her,” said her grandson.

The woman breaks her mother’s bangles with a piece of rock, following a Hindu ritual, as Dipu and his team prepare a body bag for her.

The three men sanitise the body, pick it up carefully, wrap it in the body bag and transfer it to the ambulance.

Dipu takes the body to the nearest hospital for further testing for the coronavirus.

“We take about six-seven bodies a day, some of them from homes. Many bodies are not confirmed COVID cases and are classified as normal deaths. This body was outside a hospital, so we will get it tested,” he told Al Jazeera.

The woman’s body will be classified as a suspected COVID death and then be taken to a cremation ground for the final rites.

‘Can you please close his eyes?’

Outside Delhi’s largest crematorium, the Nigam Bodh Ghat, Mohsin Khan, an ambulance driver, is smoking a cigarette with his colleagues.

Khan is waiting for the cremation of a body he brought. The grounds are full and there is a wait time of at least 4-5 hours.

A young woman wearing PPE kit comes in, tears all over her face, points towards the dead body and asks Khan, “Can you please close his eyes?”

Payal, the young woman, says it is the body of her husband. They got married only a week ago, she says.

Khan throws away his cigarette and speaks in a calm tone, visibly unfazed by the tragedy.

“That won’t be possible, ma’am. We do this every day. If the eyes aren’t shut within 15 minutes of the death, they remain open,” he tells the young widow. “Also, we can’t open the body bag. Sorry.”

Payal walks away from there, trying to console herself.

His phone continues to ring while he chatters with his friends and smokes cigarettes. All of them are ambulance drivers, waiting for the bodies they have brought in to get a spot in the crematorium.

“Every day, there is a huge queue here and we get some time off from all the chaos in the city. I don’t go inside the crematorium. I sit here, outside the gate, as I don’t want to see the last moments of a human being,” says Khan.

Khan says many people are dying at home due to the lack of hospital beds.

“We often face the anger of the family members of the deceased. They say the doctors and the hospitals never pick up their phone calls but we arrive exactly on time,” he says with a laugh, puffing out the cigarette smoke.

Khan claims most of the bodies they pick from homes are classified as non-COVID deaths, even when the person has died of symptoms associated with the virus.

Seeing the young widow all alone, restless and grieving, Khan calls the nodal officer of the LNJP hospital, asking for his help in cremating her husband’s body quickly.

“We have to help people in these times. Everyone is losing someone and this is the least we can do,” says Khan.

Meanwhile, outside the LNJP Hospital, a middle-aged woman is sitting in an ambulance, holding her sick mother’s hands. The old woman tested COVID-positive five days earlier.

The patient’s oxygen level is dropping rapidly and she urgently requires an oxygen bed. Her son goes inside the hospital to check for beds, while the woman pleads with everybody present there to help her.

Meanwhile, this correspondent gets a call from his uncle in Kolkata who says his grandmother’s oxygen has dipped to 57 percent. Even 1,400km (870 miles) away, the struggle for a hospital bed remains the same.

After disconnecting his uncle’s call, the correspondent goes back to the ambulance to check on the middle-aged woman. But it was too late. She had just breathed her last.

Buddhiraj, an ambulance driver from Khan’s team, comes to pick up the body of the woman’s mother. He begins the same procedure of sanitising the body, packing it in the body bag and taking it to the Nigam Bodh Ghat.

Buddhiraj is told he has to wait for at least six hours to get the body cremated. He asks for a cigarette as this correspondent gets his uncle’s call again. His grandmother had passed away, waiting for a bed.

As the two stand outside the crematorium, Buddhiraj breaks the silence.

“It’s a tough job, I do not like seeing people upset. I am not very educated, not very smart,” he says. “But when I look at my wife and children, I feel a sense of gratitude, of being able to help others’ families in some way.” 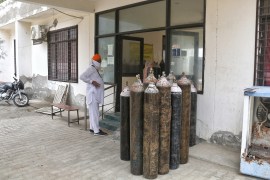 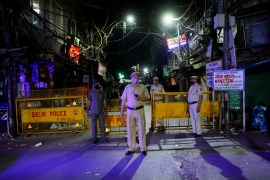 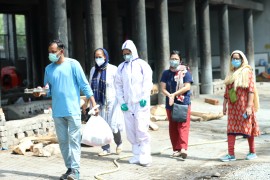 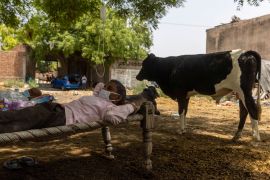