Youmna al-Sayed had less than an hour to get to safety.

But with just one elevator working in al-Jalaa tower, an 11-storey building in Gaza City housing some 60 residential apartments and a number of offices, including those of Al Jazeera Media Network and The Associated Press, al-Sayed made a dash for the stairs.

“We left the elevator for the elderly and for the children to evacuate,” the Palestinian freelance journalist said. “And we were all running down the stairs and whoever could help children took them down,” she added. “I myself helped two children of the residents there and I took them downstairs – everyone was just running quickly.”

Moments earlier, the Israeli army, which has been bombarding Gaza for six straight days, had given a telephone warning that residents had just an hour to evacuate the building before its fighter jets attacked it.

Al Jazeera’s Safwat al-Kahlout also had to move quickly. He and his colleagues “started to collect as much as they could, from the personal and equipment of the office – especially the cameras”, al-Kahlout said.

But more time was needed.

“Just give me 15 minutes,” an AP journalist pleaded over the phone with an Israeli intelligence officer. “We have a lot of equipment, including the cameras, other things,” he added from outside the building. “I can bring all of it out.”

“All I’m asking is to let four people … to go inside and get their cameras,” he told the officer. “We respect your wishes, we will not do it if you don’t allow it, but give us 10 minutes.”

“There will be no 10 minutes,” the officer replied. “No one is allowed to enter the building, we already gave you an hour to evacuate.”

When the request was rejected, Mahdi said: “You have destroyed our life’s work, memories, life. I will hang up, do what you want. There is a God.”

The Israeli army claimed there were “military interests of the Hamas intelligence” in the building, a standard line used after bombing buildings in Gaza, and it accused the group running the territory of using journalists as human shields. However, it provided no evidence to back up its claims.

“I have been working in this office for more than 10 years and I have never seen anything [suspicious],” al-Kahlout said.

AP VIDEO: Associated Press staff evacuated their office in Gaza City shortly before the building was destroyed in an Israel airstrike. https://t.co/Ib5T2SohXq

“I even asked my colleagues if they’ve seen anything suspicious and they all confirmed to me that they have never seen any military aspects or the fighters even coming in and out,” he added.

“In our building, we have lots of families that we know for more than 10 years, we meet each other every day on our way in and out to the office.”

Gary Pruitt, president and CEO of AP, also told Al Jazeera: “I can tell you that we’ve been in that building for about 15 years for our bureau. We certainly had no sense that Hamas was there.” 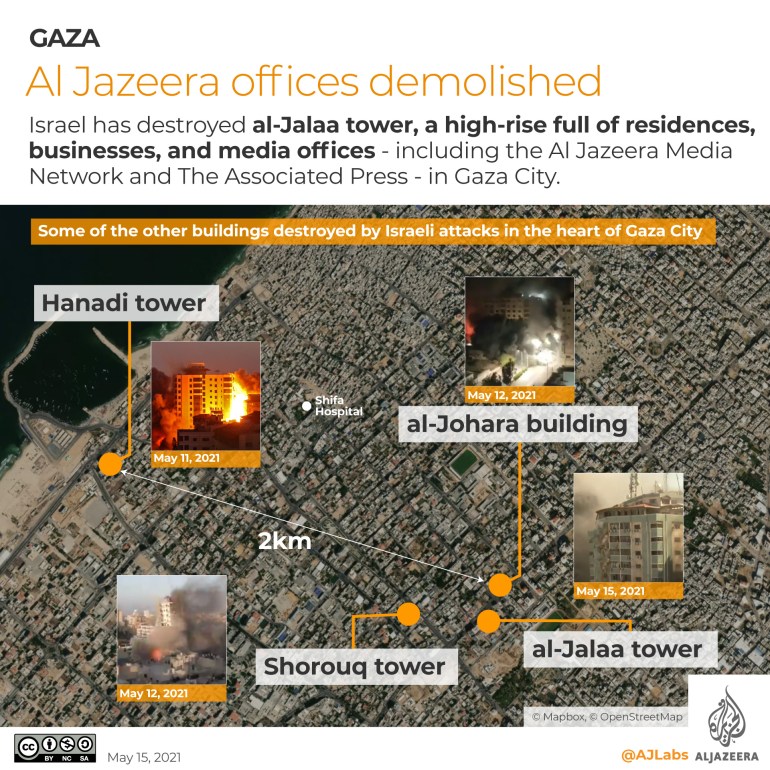 Al-Sayed, who has been covering Israel’s bombardment for Al Jazeera and has worked for AP, said she could not understand what threat a building housing families and offices for lawyers, doctors and media workers could pose.

“Where is the alarm from this? Where are the Hamas or any military members that could be in this building?” the Gaza resident asked.

“The people here, the residents, all know each other. The first five floors are for offices that are [closed] during this time of escalation. So basically what is [still here] are the two media offices of Al Jazeera and AP and the residential apartments.”

Still, at 3:12pm (12:12 GMT), the first Israeli strike came. Five minutes later, al-Jalaa tower crashed to the ground after being hit by three missiles that sent a dark cloud of dust and debris into the air. There have been no immediate reports of casualties.

“Years of memories, years of work in this building, suddenly, everything is rubble,” said al-Kahlout, about the tower from whose roof he often broadcast from. “Just vanished.”

Islam az-Zaeem, a lawyer who worked in the building, was at home when his cousin – the owner of the Johara building that was flattened overnight on May 13 – knocked on his door and told him al-Jalaa was about to be destroyed.

“I ran to the building and saw the residents and other employees gathered outside,” az-Zaeem told Al Jazeera.

“I went inside and took the stairs since the electricity was out and the elevators weren’t working. I was hysterical, and fell down several times in the dark, shouting and crying.”

Az-Zaeem, who said nine legal associates and four interns worked on his floor, left the building five minutes before it was levelled.

“Even after the building fell, I kept shouting that I’d forgotten to lock the door to my office,” he said. “Imagine that.”

AP journalist Fares Akram said he had been sleeping in the office after a long night of reporting when his colleagues began shouting, “Evacuation! Evacuation!” Akram grabbed what he could – a laptop, some electronics, and a few things from his desk – before running down the stairs and jumping into his car, he wrote in a written piece after the attack.

When he was far enough away, Akram stopped the car and got out to look back at the tower. He said he witnessed drone strikes hit the building, followed by three more powerful strikes from F-16s.

“At first, it looked like layers of something collapsing. I thought of a bowl of potato chips, and what might happen if you slammed a fist into them. Then the smoke and dust enveloped everything. The sky rumbled. And the building that was home to some people, an office to others and both to me disappeared in a shroud of dust,” Akram wrote.

The building, built in the mid-1990s, was one of Gaza City’s oldest high-rises.

Fares al-Ghoul, the executive director for the Mayadeen Media Group, said his company was previously based in the Shorouq building, which was destroyed by Israeli missiles on May 13.

“The upper floors of Shorouq were targeted in the 2014 war,” he said. “In 2019, we moved the company to al-Jalaa building because we thought it would be safer, since it accommodated the offices of international media agencies.”

“Now both have been destroyed,” he said.

‘No place is safe in Gaza’

At least 174 Palestinians, including 47 children, have been killed in the Gaza Strip since Israeli air raids on the coastal Palestinian territory began on Monday. About 950 others have been wounded.

The violence comes after Israel’s plan to forcibly displace Palestinian families from occupied East Jerusalem and its attacks on Palestinian worshippers at the Al-Aqsa Mosque compound spurred widespread protests in Jerusalem, the occupied West Bank and inside Israel. Hamas said it began firing rockets towards Israel in response to that Israeli crackdown. At least nine people have also been killed in Israel.

As evening fell on Gaza, families and journalists started returning to al-Jalaa in the hopes of salvaging some of their belongings buried underneath the rubble.

“One person came back to look for some paintings done by his daughter because these paintings carried a lot of memories,” said al-Kahlout, who continued reporting from the streets of the bombarded enclave. “We moved outside and are now applying our emergency plans for reporting. We are trying to be safe. No place is safe in Gaza but we are trying to do our best.”

BREAKING NEWS: Israeli air strike flattens media building with our @AlJazeera and AP offices .. we are watching it live as it unfolds. Beyond SHOCKED!!! No words. pic.twitter.com/PnIQXCap6Z

Al-Sayed, meanwhile, headed to al-Shifa Hospital, believed to be a safe space to broadcast from. “It’s devastating,” she said of the al-Jalaa building’s flattening.

“I worked in that place and my heart was broken to see it being brought to the ground, it was tragic. Every place whether we work or we live, we have incredible memories,” she added.

“What about those families who have lost their homes, who have lost everything they saved to get these apartments? In Gaza, it’s not an easy thing to be able to get an apartment, and now in just minutes, [they] lose everything.

With additional reporting by @LinahAlsaafin