The Biden administration has announced plans to resume funding for the United Nations agency that supports Palestinian refugees, which has faced a dire financial situation since former US President Donald Trump cut US assistance in 2018.

In a statement on Wednesday, US Secretary of State Antony Blinken said the United States would provide $150m in humanitarian assistance to the UN Relief and Works Agency (UNRWA).

UNRWA provides aid and other services, including healthcare and education, to about 5.7 million Palestinian refugees in the occupied West Bank and Gaza Strip, Lebanon, and Jordan – and the agency welcomed the US announcement.

“UNRWA could not be more pleased that once again we will partner with the United States to provide critical assistance to some of the most vulnerable refugees across the Middle East and fulfil our mandate to educate and provide primary health care to millions of refugees every day,” UNRWA Commissioner-General Philippe Lazzarini said in a statement.

Blinken said the US also plans to provide Palestinians with $75m in economic and development assistance for the occupied West Bank and Gaza, as well as $10m for peacebuilding programmes through the US Agency for International Development (USAID).

His statement added that Washington would resume “vital security assistance”, without going into further details.

“The United States is committed to advancing prosperity, security, and freedom for both Israelis and Palestinians in tangible ways in the immediate term, which is important in its own right, but also as a means to advance towards a negotiated two-state solution,” Blinken said.

US President Joe Biden, who took office on January 20, has promised to take a different approach to Palestinian relations than his predecessor.

The US has always been a staunch defender of Israel, but Trump took the relationship to new heights – and had a very close relationship with Benjamin Netanyahu, Israel’s longstanding right-wing prime minister.

Yet while Biden pledged to reinstate US diplomatic relations with the PA and restore US aid for Palestinians, his administration has signalled its refusal to reverse some of Trump’s most divisive policies on the conflict.

It said it would not reverse Trump’s decision to move the US embassy from Tel Aviv to Jerusalem, for instance, or oppose diplomatic normalisation deals that were brokered by the Trump administration between Israel and the United Arab Emirates, Bahrain, Sudan and Morocco.

Al Jazeera’s Kimberly Halkett, reporting from Washington, DC, said the Biden administration sees resuming funding to the Palestinians “as being critical to resolving the Palestinian-Israeli conflict”.

“They feel that this is a first building block for doing that. They also see this as a national security objective and that is one of the reasons for making this a top priority,” Halkett said.

UNRWA has faced years of pressure from Israel and its allies, who have pressed for the agency to be abolished and its mission handed over to the UN refugee agency (UNHCR).

Most of the refugees assisted by the agency are descendants of some 700,000 Palestinians who were driven out of their homes or fled fighting in the 1948 war that led to Israel’s creation – and observers say pressure on UNRWA is part of an effort to discredit the rights of the refugees.

Gilad Erdan, the Israeli ambassador to the US and UN, slammed the Biden administration’s decision on Wednesday. “Rather than solving the conflict, UNRWA perpetuates it. Any return to funding it must be contingent on essential reforms,” Erdan wrote on Twitter.

But Ahmed Abu Huly, a member of the Palestine Liberation Organization (PLO) executive committee, said he would be holding a Zoom meeting with US State Department official Richard Albright to express appreciation for the “very important support” and said he hoped it would continue.

Palestinian Authority Prime Minister Mohammad Shtayyeh also welcomed the resumption of aid and called “upon the American administration to create a new political path that meets the rights and aspirations of the Palestinian people based on international law and UN resolutions”.

We welcome the resumption of US aid to UNRWA & Palestine, and we call upon the American administration to create a new political path that meets the rights and aspirations of the Palestinian people based on international law and UN resolutions.

The UN also welcomed the plan to restart US funding for UNRWA.

“There were a number of countries that had greatly reduced to halted contributions to UNRWA. We hope that the American decision will lead others to rejoin … as UNRWA donors,” UN spokesman Stephane Dujarric told reporters.

Soon after Biden took office, his administration began laying the groundwork for restored relations with the Palestinians as well as renewed aid. Biden’s aides are crafting a more detailed plan to reset ties, two people familiar with the matter told the Reuters news agency in mid-March.

However, the administration is likely to hold back for now on resuming direct economic aid to the Palestinian Authority while Biden’s aides consult with Congress on potential legal obstacles, according to one person familiar with the matter.

The administration announced late last month that it would give $15m to vulnerable Palestinian communities in the occupied West Bank and Gaza to help fight the COVID-19 pandemic. 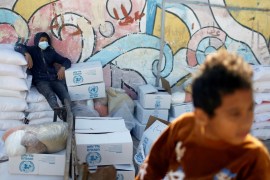 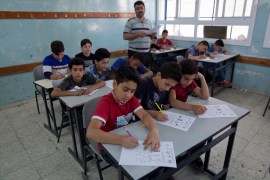 Aiding Palestine refugees is not political

Attacks on UNRWA are aimed at politicising a humanitarian organisation that has remained neutral in its work.