Montreal, Canada – Jean-Charles Pietacho says the belief that nature is a living thing that must be respected, has been at the heart of the Innu people’s way of life for generations.

But now, that idea has been applied in a new way as the Innu Council of Ekuanitshit in February recognised the Magpie River, a 300km (186 miles) waterway in the Cote Nord region of the Canadian province of Quebec, as a “legal person”.

The designation – a first in Canada – aims to give the Indigenous community an added tool to defend the river, known as Muteshekau Shipu in the Innu language, from potential environmental harms.

“The Creator put us on this piece of territory called Nitassinan, which encompasses all these rivers, all these mountains, all these trees,” Pietacho, chief of the Innu Council of Ekuanitshit, told Al Jazeera in a phone interview. “The Innu people always believed that you had to protect the earth. It’s water – it’s life.”

The Magpie River, which sits on the north shore of the St Lawrence River and is known for its strong rapids, currently has one hydroelectric dam on it, but the provincial energy authority has said it has no plans for further development on the waterway.

“Despite that, we didn’t feel secure, we didn’t have total confidence,” Pietacho said.

“It’s very, very important for us to have arrived at this protection. It might be tested, but at least we have a majority – if not the entire region – that supports us.”

The Magpie is the first river in Canada to be granted legal personhood rights – through twin resolutions adopted by the Innu Council of Ekuanitshit and a local body, the Minganie Regional County Municipality – but it is unclear what would happen if the designation is tested in a Canadian court.

Among other things, the resolution affirms the river’s “right to live, exist and flow”, to evolve naturally, to be protected from pollution, to maintain its integrity, and to take legal action. It says “river guardians” will soon be appointed to ensure that those rights are respected.

The decision comes as a movement called “rights of nature” gains global attention.

Proponents of the idea, put forward in a 1972 paper by Christopher D Stone called Should Trees Have Standing? Toward Legal Rights for Natural Objects, say current legal systems often fall short on protecting the environment.

Instead of treating nature as property under the law, they want it to hold legal standing on its own – in other words, legally enforceable rights akin to those of humans or corporations. Depending on how a specific case is framed, the obligation then falls to specific actors to ensure the legal rights of nature are not infringed upon.

Courts, various levels of government, and other decision-making bodies in countries around the world have recognised the personhood rights of ecosystems in different ways over the past few years: In 2017, a court in India ruled that the Ganges and Yamuna rivers should be granted the same legal rights as people. Colombia’s Constitutional Court declared in 2016 that the Atrato River in the country’s northwest was a “subject of rights”.

Over a decade earlier, Ecuador in its 2008 constitution recognised the right of nature to exist, maintain and regenerate. “All persons, communities, peoples and nations can call upon public authorities to enforce the rights of nature,” the constitution reads.

Experts say Indigenous communities around the world – where the idea that nature has inherent rights is longstanding – have emerged at the forefront of many of the campaigns to grant personhood status to bodies of water and other ecosystems.

“The rights of nature, in the Ecuadorian context, is very much tied to the worldviews of various Indigenous groups … of emphasing the interconnectedness of ecosystems and the social world,” said Maria Akchurin, assistant professor of sociology at Loyola University in Chicago, who has studied the Ecuador case.

Akchurin told Al Jazeera that while Ecuador is one of the region’s major oil exporters and has a growing mining sector, it is also extremely biodiverse – and the constitutional recognition came amidst underlying tensions between economic development, environmental protection and Indigenous rights in the country.

Legal personhood for nature has been largely symbolic so far, she added, though it can give social groups and communities a new way to frame their opposition to extractive projects, especially as the rights of nature have begun to be applied by the courts. “But in terms of actually stopping projects it’s difficult to say if it’s been really effective,” Akchurin said.

“I think it’s a great conversation to have, I think it’s extremely valuable and I think it can work in particular settings; but we should also be mindful that just having rights on paper doesn’t necessarily translate into concrete change on the ground immediately.”

Perhaps the most prominent cases have been in New Zealand, where the Whanganui River – the country’s third-longest river, located on the North Island – was recognised as a “legal entity” in 2017 as part of a negotiated settlement between the government and the Maori people. The legal entity, called Te Awa Tupua, “has all the rights, powers, duties and liabilities of a legal person”, the agreement reads.

Three years earlier, also in negotiations with Maori leaders, New Zealand similarly recognised Te Urewera, a former national park, as a “legal entity”. It also reached an agreement in 2017 with Maori tribes to recognise the Taranaki Mountain on the North Island as a person. Negotiations for the implementation of the latter deal are ongoing.

Jacinta Ruru, professor of law at University of Otago and co-director of Nga Pae o te Maramatanga, New Zealand’s Maori Centre of Research Excellence, said she does not consider these examples part of the environmentally driven “rights of nature” movement, however.

“In the New Zealand context, the legal personality arose from a hopeful reconciliation with the Indigenous peoples, Maori, not from a rights to nature [perspective],” Ruru told Al Jazeera.

Both the Te Awa Tupua and Te Urewera agreements clearly outline the legal rights, obligations and decision-making bodies tasked with monitoring the legal personhood status of the ecosystems. In the case of the river, the government of New Zealand and the Maori tribal federation each chose one person to speak on its behalf.

“From a Maori perspective, that comes very naturally,” Ruru said, explaining that Maori people have always spoken about rivers or mountains “as being their ancestors and that we must be respecting them, that their health and wellbeing is totally interrelated to the health and wellbeing of us as people and our community”.

Ruru added that the New Zealand agreements demonstrate that countries can better enable Indigenous participation in the management of lands and waters. “This is not Indigenous peoples necessarily saying anything new, it’s just that other peoples are now listening.”

In other countries, some have raised concerns about how legal personhood for nature is being applied. In Bangladesh, where the country’s top court in 2019 granted all rivers the same legal rights as people, some say without a clear framework for implementation, the decision could make it easier to evict poor communities living off the waterways.

“The New Zealand ruling recognised communities as stakeholders, and that is key,” Himanshu Thakkar, coordinator of South Asia Network on Dams, Rivers and People, told the Reuters news agency at the time.

Meanwhile, in the United States, legal personhood cases have been met with staunch opposition. A court in the US state of Ohio last year ruled as unconstitutional the Lake Erie Bill of Rights, passed by the city of Toledo in 2019, which recognised the lake’s “right to exist, flourish, and naturally evolve”. A farmer had sued, saying the move was an “unconstitutional and unlawful assault” on family farms.

Another lawsuit seeking to have a court recognise the Colorado River ecosystem as “capable of possessing rights similar to a ‘person'” as well as “rights to exist, flourish, regenerate, and naturally evolve” was withdrawn in 2017 after pressure from state authorities.

“At the time, the Attorney General [office] was run by a Republican, so they threatened me with sanctions and disbarment,” Jason Flores-Williams, the lawyer who brought the case, told Al Jazeera. He said officials had argued “that it was ridiculous to make an argument on behalf of the rights of nature and personhood of nature”.

Nevertheless, the push to grant legal personhood to nature is gaining attention.

Back in Montreal, Yenny Vega Cardenas, president of the International Observatory on the Rights of Nature, said the Magpie River recognition drew interest from people across Canada and abroad, who have since called to ask if their local rivers could also get personhood rights.

She said a shift in thinking is under way – and with each successful case, more communities are considering the idea. “We’ve become aware of the weaknesses of our system,” she told Al Jazeera. “And if we don’t change now, when? We cannot wait any longer.” 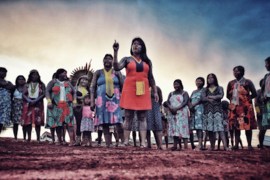 We have a duty to support their fight to protect the Amazon from Bolsanaro’s destructive ‘pro-development’ policies. 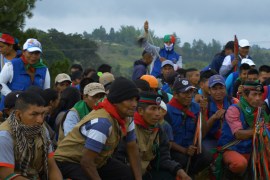 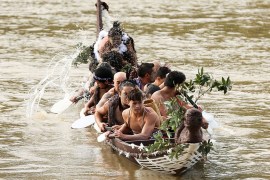 Under legislation passed, the Whanganui river has been formally declared a living entity.