Turkey will enforce a nationwide lockdown from Thursday until May 17 to fight a surging third wave of coronavirus infections.

The measures, set to be enforced from 7pm (16:00 GMT) appear to be designed to avoid another spike approximately the time of traditional family gatherings and celebrations that take place when the Muslim holy month of Ramadan ends in mid-May.

The nation of 84 million people has seen daily COVID-19 death tolls rise to approximately 350 in the last week, higher than during the two previous spikes last year.

Turkey’s 40,444 new infections reported on Wednesday were the highest in Europe but still down from the peak of more than 60,000 reported earlier this month.

The total number of cases since the beginning of the pandemic stands at 4.75 million, including 39,398 deaths.

“We must quickly reduce the number of cases to less than 5,000 a day,” Turkish President Recep Tayyip Erdogan said in a televised address on Monday, adding that Turkey would enter “a full closure” that requires people to stay indoors without a valid reason and sees all non-essential businesses closed.

Travel between regions will be restricted and supermarkets will also be closed on Sundays for the first time.

The new restrictions come with Turkey falling considerably behind its planned inoculation schedule after a quick start in mid-January.

It has carried out 22 million inoculations, with 13.55 million people receiving the first dose.

The country is pushing China to speed up the delivery of Sinovac’s CoronaVac vaccine after securing a deal for 100 million doses.

Turkey has also received its first deliveries of the Pfizer-BioNTech vaccine and has reached a deal with Russia to swiftly acquire and start producing Sputnik V locally.

The Russian vaccine will start arriving next month and should help address a short-term fall in supply, Health Minister Fahrettin Koca said on Wednesday.

Vaccines will be scarce in the upcoming two months, Koca said, but the shortfall should in time be overcome with the new procurements and ultimately by production in Turkey.

Five people have been diagnosed with the COVID-19 variant first identified in India, the minister said, adding that the cases were isolated and being monitored. 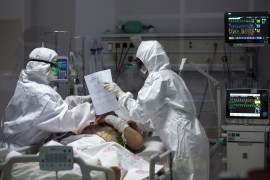 More than 62,000 cases reported on Wednesday, taking the country’s tally past four million since start of pandemic. 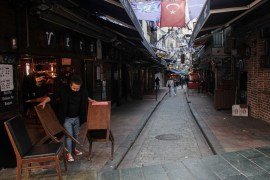 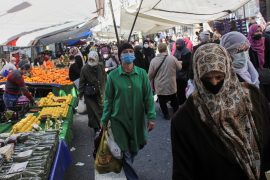