During a much-anticipated appearance before a judicial panel probing allegations of corruption and fraud under Zuma, Ramaphosa said on Wednesday graft had “eroded” constitutional values and “undermined the rule of law”.

“We all acknowledge that the organisation could and should have done more to prevent the abuse of power and the misappropriation of resources that defined the era of state capture,” Ramaphosa, who was Zuma’s deputy president from 2014 until 2018, told the panel probing alleged state looting.

“The ANC does admit that it made mistakes,” he said. “It had shortcomings in living up to the expectations of the people of South Africa in relation to enforcing accountability.”

The “state capture” inquiry is probing allegations of corruption during Zuma’s nine years in power, including that Zuma allowed businessmen close to him – brothers Atul, Ajay and Rajesh Gupta – to influence policy and win lucrative government contracts.

Zuma and the Guptas have repeatedly denied the allegations against them.

Ramaphosa, the first sitting president to testify in such a probe, appeared in his capacity as the current leader of the ANC, the party that has governed South Africa since the end of white minority rule in 1994.

Dozens of ministers and former ministers, elected officials, businessmen and senior civil servants have appeared before the commission.

Ramaphosa, who took over from Zuma in 2018 and won a presidential election the following year, admitted that the ANC had over the years become aware of malfeasance and patronage within the state and within its own ranks.

“State capture took place under our watch as the governing party,” he said.

“It involved some members and leaders of our organisation and it found fertile ground in the divisions, weaknesses and tendencies that have developed in our organisation since 1994,” Ramaphosa said.

Zuma has testified before the panel only once, in 2019, before staging a walkout. He has since repeatedly resisted testifying, alleging political interference.

Al Jazeera’s Fahmida, Miller reporting from Johannesburg, said “many South Africans want accountability and it is not certain if they will get that from the president’s testimony at the commission.

“In recent months, former President Jacob Zuma refused to return to the commission, saying that it was a witch-hunt, that he was being vilified and that the ANC was being targeted – and there are many ANC members and supporters who feel the same way,” Miller said.

The president is expected to continue testifying on Thursday, then return to the probe in his capacity as head of state in May.

“Many will be watching to see if there is a greater understanding of exactly how South Africa got to this point and whether or not this will just be a PR exercise for the president in a year when South Africans are going to local elections and the ANC is looking for votes,” Miller said.

Opposition parties held a gathering outside the Johannesburg building where the inquiry was being held and participants said Ramaphosa should personally shoulder some of the blame.

“Ramaphosa was part and parcel of the decisions. He was the deputy president of the country when money disappeared,” said William Madisha, a legislator with small party COPE. “The ANC must pay back what belongs to the people.” 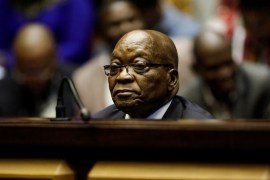 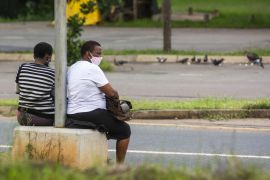 South Africa’s economy shrank by most in century last year