Rome, Italy – A judge in Rome is set to decide whether four members of Egypt’s security forces should face trial for the abduction, torture and murder of Giulio Regeni, an Italian student who was found dead on the outskirts of Cairo five years ago.

His body was found on the side of a highway nine days later, bearing extensive signs of torture.

The murder shocked Italy and led to calls to bring the perpetrators to justice, with prosecutors accusing Egyptian authorities of failing to collaborate.

Sharif is also being investigated for injury and murder.

On Thursday, a judge in Rome will decide if the findings are solid enough to proceed with the trial, regardless of the agents’ presence.

“This is unprecedented,” Hussein Baoumi, a researcher focusing on Egypt for Amnesty International, told Al Jazeera.

“No case in recent history has seen an [NSA] agent being held accountable, or prosecuted for torture, kidnapping and murder – even if in absentia.

“The use of torture by NSA’s officers has never been a secret, but this trial offers the chance to bring the discussion within a court of law.”

In December, prosecutors referred to five key witnesses to build their case.

Testimony from an NSA employee of 15 years described seeing Regeni inside office number 13 of the agency’s Lazougly office, an old villa where foreigners suspected of plotting against the country’s national security were usually brought to, according to an Italian court’s transcript.

Regeni was seen between January 28 and 29 handcuffed while lying on the ground half-naked, tortured and delirious.

After the four agents were named and accused, about 10 more people came forward to approach Italian prosecutors.

Of these, three testimonies were deemed reliable and were officially added to the case in mid-April, an Italian judicial source told Al Jazeera.

After news of the indictment spread, the witnesses were “emboldened … to come forward to tell what they knew”, the source said.

One of those witnesses was a friend of Mohammed Abdallah, a trade union leader Regeni was researching as part of his thesis.

The witness told investigators he had met Abdallah on February 2, a day before Regeni’s body was found.

Abdallah told the witness that he was at the NSA office when he heard a phone conversation between two officials discussing the Regeni’s death and how his body should be maimed to disguise the killing as part of a robbery, the judiciary source said.

Egypt’s interior minister said in March 2016 that security forces had killed five members of a criminal gang in possession of some of the researcher’s belongings.

But Italian prosecutors dismissed the claim as a cover-up.

Egyptian officials have denied any involvement in the killing. In late December, prosecutors in Cairo ruled out any charges against the four officers.

Even if the four suspects are found guilty, observers have said Egypt is once again unlikely to collaborate.

“However, this trial is very important as it finally allows us to put pen to paper on what happened and who should be held accountable,” Antonella Massaro, a professor of criminal law at Roma Tre University, told Al Jazeera.

The Regeni story has gripped the country for years.

His parents have kept up an online campaign to try and pressure the authorities who were accused of turning a blind eye while prioritising economic interests.

Meanwhile, rights groups have long accused the government of President Abdel Fattah el-Sisi of enabling impunity by allowing the systematic use of torture, while failing to bring to justice those responsible.

“The trial will, sadly, have absolutely no impact on Sisi’s hold on power or standing in Egypt,” said Yezid Sayigh, a senior fellow at the Carnegie Middle East Center.

“Nor will it affect relations with Italy, as the Italian government has shown repeatedly that it will not allow the Regeni case to impede its commercial, investment and energy ties with Egypt.”

Since 2015, Rome and Cairo have tightened their economic relationship, particularly after Eni, an Italian oil and gas company, found the Zohr gas field in Egypt.

From the year of Regeni’s disappearance to 2019, arms sales from Rome to Cairo jumped from $8.3m to $980m, according to parliamentary reports.

As he awaited Thursday’s decision, Amnesty’s Baoumi said: “It’s very important that countries ensure the respect of human rights to avoid another Regeni.” 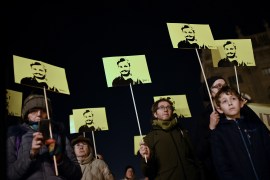 Prosecutors investigate four agents of the Egyptian National Security Agency for the murder of Giulio Regeni. 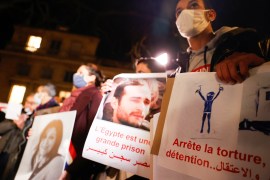 EU Parliament voted on ‘unified and resolute’ response against Egypt’s silencing of activists. 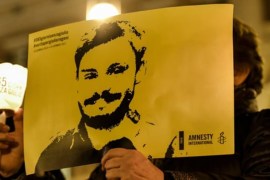 Will there finally be justice for Giulio Regeni?