At least one out of every three new COVID-19 cases around the world today is being recorded in India.

Wednesday was the country’s deadliest day with 3,293 deaths reported, carrying the total to 201,187 fatalities.

Experts believe the official tally vastly underestimates the actual toll in a nation of 1.35 billion, however.

The second wave of infections has seen at least 300,000 people test positive each day for the past week, overwhelming healthcare facilities and crematoriums and fuelling an increasingly urgent international response.

According to Reuters, one person is dying of COVID every four minutes in the capital New Delhi, one of the hardest-hit cities. 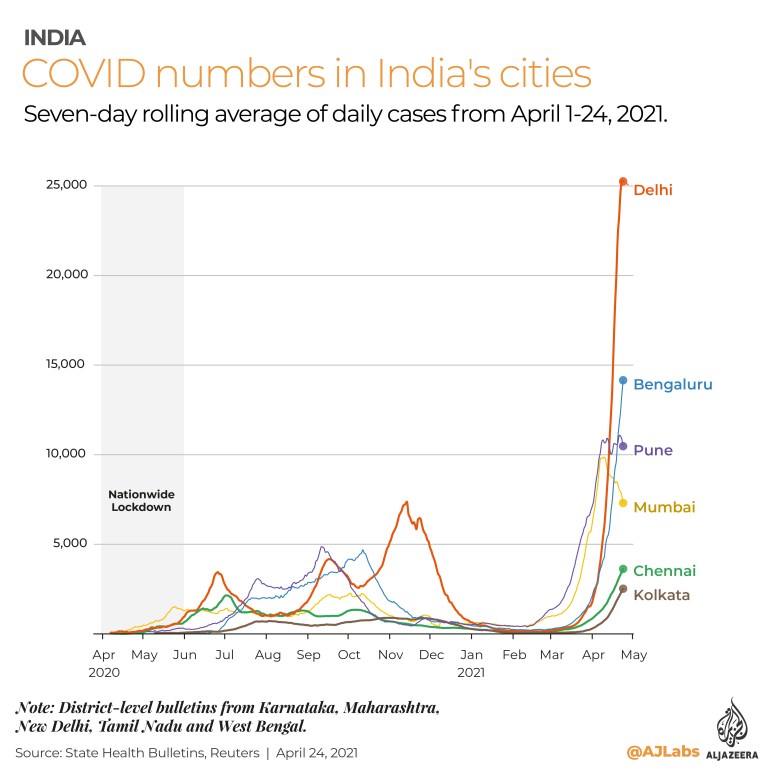 Speaking to Al Jazeera, Dr Ritesh Malik, director of Radix Healthcare in Delhi, said India was going through what is possibly its most challenging situation since the partition in 1947.

He described a vulnerable population constantly in search of oxygen, hospital beds and life-saving medicines as infections surge, even among young people. Malik believes India has not yet reached the peak of the crisis, which he expects in the coming week or 10 days.

Here is how COVID spread across India’s states since March 2020:

Here is a map of COVID cases in India:

When did infections accelerate?

The positivity rate, which measures how widespread the virus is in a community, has increased across the country from 4.2 percent to 18.4 percent over the past month.

Some states, including Chhattisgarh and Delhi, have reached a nearly 30-percent positivity rate.

The positivity rate is the ratio of positive cases to overall tests in a particular location. 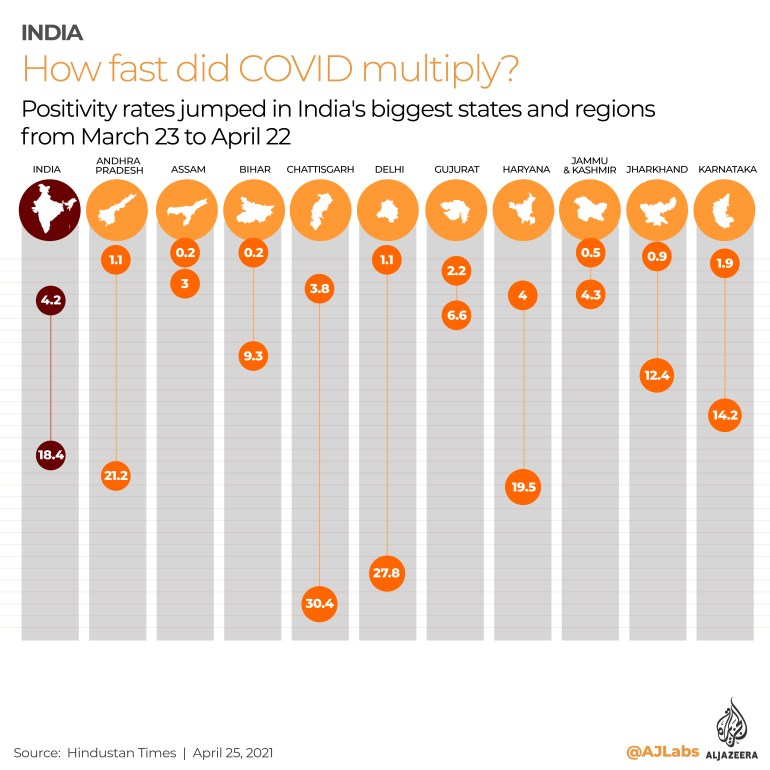 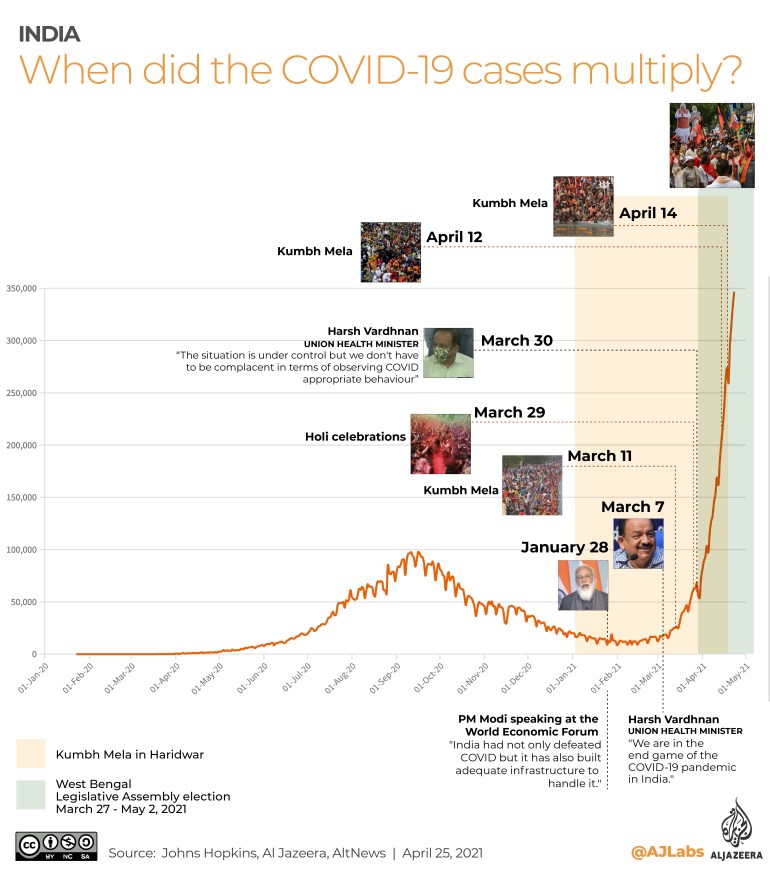 According to The Caravan magazine, the government-appointed task force for COVID-19 did not hold any meetings in February and March. It only met in January, and then April on 15 and April 21 as cases surged.

The sharp increase in cases has strained the healthcare system, causing long lines outside hospitals and families begging to have their loved ones looked at by a doctor.

The government has deployed military planes and trains to get oxygen from the far corners of the country as well as overseas.

Crematoriums across Delhi said they were full and asked grieving families to wait.

The Scroll website reported on April 18 that only 11 out of 50 planned oxygen generation plants had been set up across the country in eight months. In response, the Ministry of Health claimed 162 such plants were planned, of which 32 have been set up.

India has administered at least 138 million COVID vaccine doses since January 2021. But with a population of nearly 1.4 billion, this means that less than 10 percent of its population has received at least one dose of the vaccine. 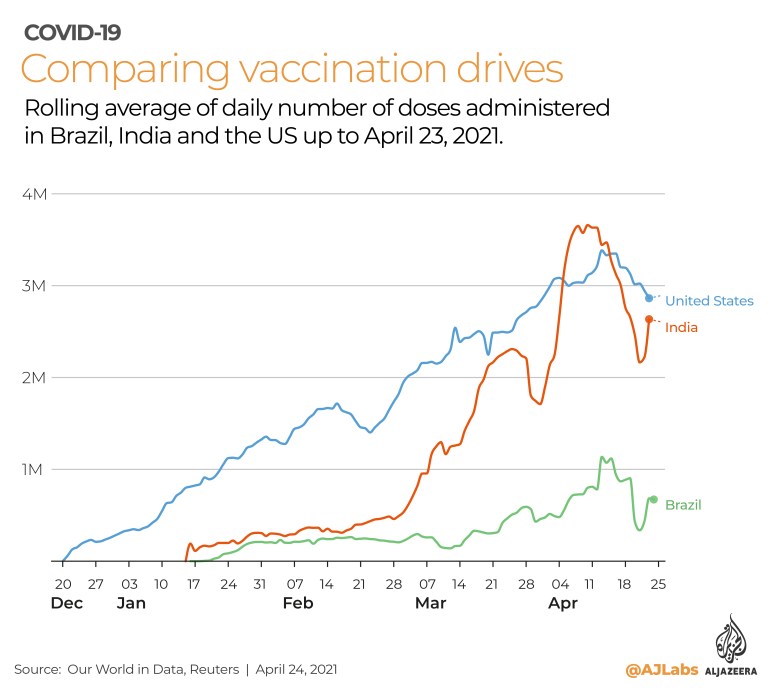 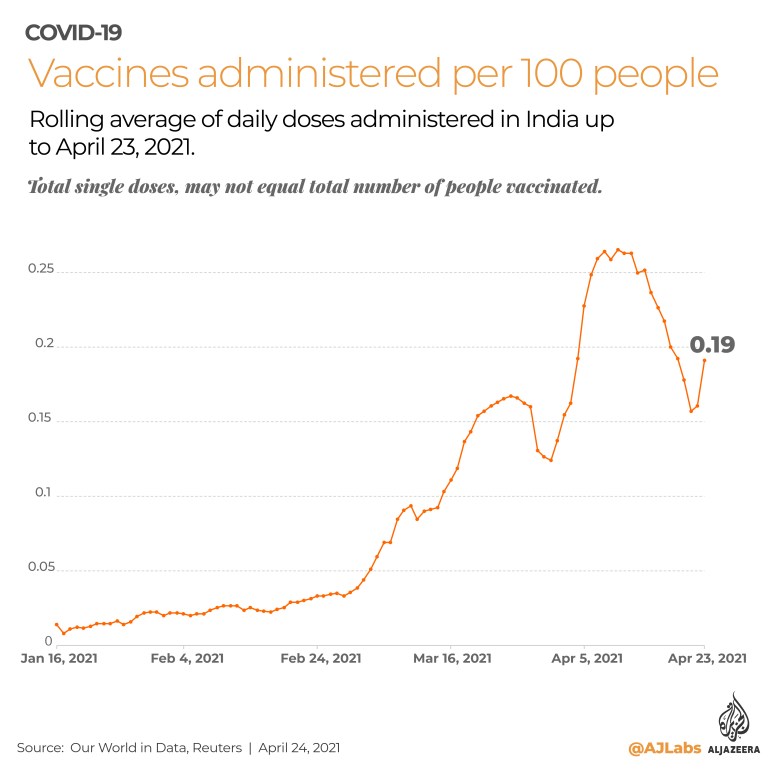 India has produced at least 193 million does or approximately 21 percent of global COVID-19 vaccines.  It has exported some 66 million doses to more than 95 countries under the COVAX alliance, including at least 10.61 million as grants.

In March, the export of these vaccines was banned by the government due to shortages within the country. The import of private, for-purchase vaccines has been allowed and the sale of domestic vaccines permitted in private hospitals.

Government funding to the SII was greenlit on April 19 to step up manufacturing to cover India’s needs.

The SII and Bharat Biotech will get $400m and $210m each from the Indian government.

On Sunday, the US, which had stopped exporting raw materials to India, announced that it would now be helping with the supply of raw materials to help the country fast-track its vaccine production.